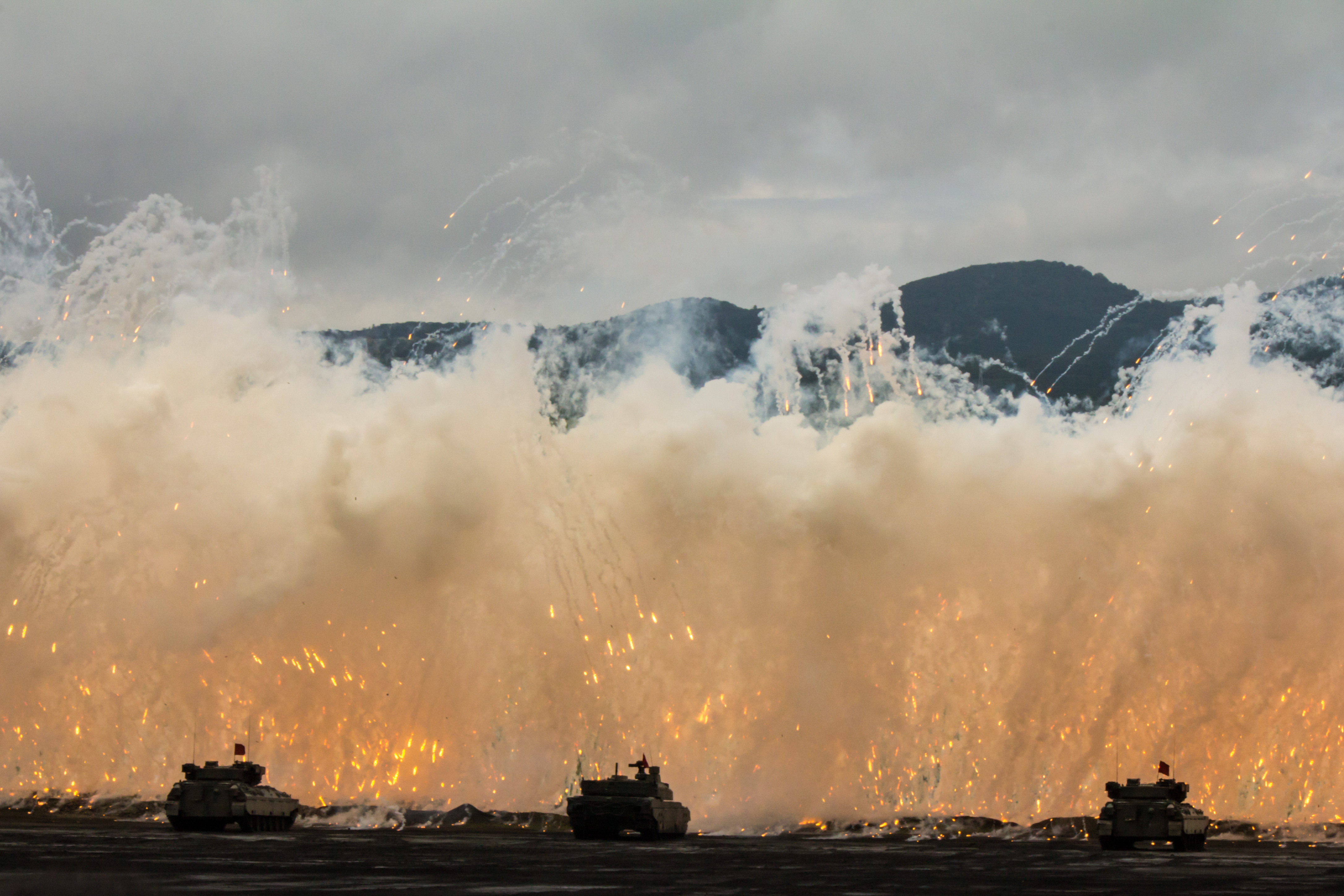 Since his comeback as prime minister in December 2012, Abe Shinzo has vigorously pushed for a redesign of Japan’s security system. As such he has proposed to ‘take Japan back’ from its constraining post-war regime and to restore a ‘strong Japan’ capable of deploying its military forces overseas in support of security allies. The evolving security architecture comprises newly designed institutions for intelligence and security policy coordination, a review of Japan’s defence posture with upgraded military capabilities, and the lifting of the long-standing ban on Japanese arms exports and participation in joint defence technology research. These policy changes were implemented as a precondition for the Abe cabinet’s recent decision on revising the enduring interpretation of Japan’s constitution. In sum, they are the foundation for a new strategic outlook termed ‘proactive pacifism’, which aims at an enhanced role of Japan’s military in international peacekeeping and conflict resolution, and a strengthening of the US-Japan alliance.

Since its enactment in 1947, Japan’s pacifist constitution with its war-renouncing Article 9 banning the possession and use of military force functioned as a major ideological cleavage in Japanese politics. Thus while constitutional revision remained on the agenda, US security guarantees and a functioning domestic opposition have helped to entrench Japan’s pacifist institutions. Although Japan established military forces in 1954 in light of the Asian Cold War, Tokyo’s grand strategy (aka the ‘Yoshida Doctrine’) remained intact as policymakers embraced a political realism which recognized the utility of a passive/low-profile military posture in pursuit of sustained growth of its export-orientated economy. Japan’s pacifist security regime further consolidated in the 1960s and 1970s, with a self-imposed ban on arms exports and a one-per cent ceiling of its defence budget. Thus, Japan’s post-war constitution has nourished a broadly shared anti-militarist and pacifist state identity shaping the trajectory of Tokyo’s security strategy.

Yet, for Abe and his supporters, this so-called post-war regime is the prima facie cause for Japan’s political weakness. PM Abe’s political rise is closely linked with national security issues, and here particularly North Korea’s state-sponsored kidnapping campaign of Japanese citizens during the 1970s and 1980s. Advocating a hard-line course towards the DPRK, Abe has employed a rhetoric frame which links the North Korean abduction issue to the illegitimacy and vulnerability of Japan’s post-war institutions, which in his eyes proved unable to protect its citizens from a North Korean infringement of Japan’s sovereignty. Abe has hence been consistent in claiming that constitutional revision is a precondition for a ‘strong’ Japan.

The current policy changes do not represent a revolution in Japan’s post-war security regime. In fact, the Abe administration both builds on and accelerates changes in place since the end of the Cold War. As it was criticized for its reluctant and passive role in solving security crises such as the 1990 Gulf War or the 1993-94 Korean nuclear crisis, Japan saw the unfolding of a debate on the future of its national security posture. The policies adopted as result of this soul-searching include a qualitative upgrade of Japan’s defence capabilities, including ballistic missile defence, Japan Self- Defense Forces (JSDF) dispatches to UN peacekeeping operations and the ‘war on terror’ campaign in Afghanistan and Iraq, and the construction of an overseas military base in Djibouti. These changes have caused many observers to question the constraining role of Japan’s pacifist institutions pointing towards an increasingly ‘normal’ Japan, capable of and indeed willing to employ its military forces overseas in order to address international security problems.

Abe’s redesigned security system embraces three main pillars. Firstly, in November 2013 Japan’s Diet passed a state secrecy bill aiming at tightening the government’s control of information sensitive to state legislation. This bill enables the Abe administration to designate 23 types of information related to counter-terrorism, defence and diplomacy as ‘special state secrets’. While the government has not specified what constitutes a ‘state secret’, journalists or state officials who disclosed sensible information in violation of the law would face prison sentences of up to ten years. The law remains also ambiguous as to who gets to decide what information will be considered sensitive to state legislation. Abe has advocated a strong role of the Cabinet Office and of the Prime Minister in this process, and as such has triggered protest from Japan’s mass media and civil society, who fear a rollback of Japan’s post-war democracy due to state intervention in journalism and academia.

The state secrecy law has been the precondition for the second pillar of Abe’s security system in form of a National Security Council (NSC) established in November 2013. The NSC follows the American model and is designed to smooth intelligence and policy coordination with its US counterpart and across Japanese institutions, as well as to strengthen the PM’s role in defence and security policymaking. The NSC replaces the old Security Council (established in1986) and institutionalizes crisis management and security planning within the Cabinet Office in form of the National Security Bureau. The new council is led by Japan’s foreign and security policy brain Yachi Shotaro. In addition to the on-going territorial dispute with China, Abe’s NSC proposal has received support by after the Algerian hostage crisis in January 2013, in which 10 Japanese nationals were killed, as well as after North Korea’s third nuclear test in February that year.

These new institutions and policies are equipped with a National Security Strategy (NSS), introduced in December 2013 and which functions as a blueprint for a grand strategy termed ‘proactive pacifism’. The strategy is the first of its kind in Japan and points to the shifting power balance in East Asia, marked by a rising China and a declining US presence, as well as sustained threats posed by North Korea’s military and nuclear campaigns. As such, the strategy calls for a strengthening of Japan’s defence capabilities and a proactive role in managing these regional power shifts. In December 2013, building on these strategic objectives, Abe revised  Japan’s National Defense Program Guidelines and Mid-Term Defense Plan. The new defence strategy advances the concept of ‘dynamic defence forces’ introduced by the Democratic Party of Japan government under Kan Naoto in 2010. The concept entails a shift in force structure and deployment towards a strengthening of Japan’s naval and air forces, in response to new security challenges converging over maritime disputes in the southern region of the archipelago. The new defence plan includes the procurement of 52 amphibious landing vehicles, 17 Osprey transport aircrafts, 3 Global Hawk surveillance drones, 5 destroyers, 5 submarines, and 23 patrol aircraft. In addition, Japan will add 28 F-35 Lightening fighter jets to its air force. Furthermore, the new defence plan includes the introduction of US-modelled marine forces designed to (re)capture territory.

The qualitative upgrade of Japan’s military capability is realized with a 2.8 per cent increase in the defence budget, with 4.88 trillion yen allocated to the military sector. For 2015, Japan’s Ministry of Defense (MOD) has requested 5.05 trillion yen, which is the largest budget request ever, and signifies, if approved, a 3.5 per cent rise in comparison to the previous year. In addition to these increases, Japan’s Coast Guard, which functions as a paramilitary force, has experienced over the last years a similar boost in its budget, as tensions with China and South Korea over disputed islands increased, and North Korean spy ships entered Japanese waters.

Japan’s new strategic outlook and security institutions entail two objectives: the strengthening of the US-Japan security alliance, and the balancing of China through an increased Japanese presence in the region. With the implementation of the CSD legislation, the former objective has been achieved, as Washington praised Japan’s commitment to a proactive role in international security affairs. Despite the ‘disappointment’ expressed by the Obama administration over Abe’s Yasukuni visit and Japan’s stalled relations with South Korea and China, Abe has invested significant political capital in restoring Washington’s confidence in the alliance by pushing plans to relocate the Futenma Airbase in Okinawa to its new site in Henoko despite public protest on by the Okinawans. In addition, Abe has facilitated the export of Japanese arms and participation on joint defence technology research. The dismantling of Japan’s anti-weapon export ban is exemplified by the NSC’s July approval of transferring missile technology used in PAC-2 surface-to-surface missiles to the US and sensor-related equipment to the UK. Abe has also signed an agreement with Australia, which includes the export of Japan’s ultra-quiet Soryu submarine propulsion technology to that country. An agreement to advance joint development of military technology is also been discussed with France. Paris has also proposed the conclusion of an ‘Acquisition and Cross-Servicing Agreement’ which Tokyo currently holds with the US and Australia. Such an agreement allows for the exchange of equipment and supplies such as food, fuel, transportation, and ammunition.

The second objective of hedging China’s influence in the region is closely linked with Japan’s initiative of facilitating an indigenous arms industry. For example, Japan has announced plans to develop its own fighters. With the new fiscal year the government will allocate 40 billion yen to the MOD for research on experimental engines and stealth technology. In addition, the MOD announced plans to create a research fund modelled on the US Defense Advanced Research Projects Agency, designed to aid domestic universities in joint research projects on defence technology, and here, particularly, aviation and radar surveillance technology. This fund will be equipped with two billion yen from 2015 on, and increased over the course of the following three years until it reaches six billion yen.

While many of these changes to Japan’s security system have been met with dissent, China’s management of the territorial dispute over the Senkaku/Diaoyu islands, Beijing’s unilateral announcement of an air defence identification zone in November 2013, and its assertive posture in addressing its maritime disputes in the South China Sea, have provided Abe with strong arguments for his security agenda, thus moderating the impact of public protest. As Corey Wallace has pointed out in an earlier contribution to this blog, Abe’s policy changes entail great symbolic importance as they indicate a critical juncture in the evolution of Japan’s security system. While Japan has refrained from exercising the right of collective self-defence (CSD) enshrined in Article 51 of the UN Charter, Abe’s constitutional reinterpretation has put Japan on track for a proactive role in international security affairs. Despite Abe’s pledge that operations involving the Japan Self-Defence Forces will not breach the limits imposed by Article 9 of the constitution, the government has, thus, opened the door for Japan to dispatch its forces to international security operations. None of these changes are revolutionary in nature, as Abe has facilitated and accelerated shifts that can be traced back to the years following the end of the Cold War. Yet, the tempo by which Abe drives Japan’s departure from its post-war pacifist posture and integrates it into a global defence market while consolidation Japan’s security posture in the region, must be considered revolutionary when compared to earlier decades.

Finally, the validity of this argument and the continuity and sustainability of the changes implemented under Abe will critically depend on the success of his economic reform agenda, known commonly as ‘Abenomics’. As Abe’s public support ratings dropped below the 50 per cent mark in July (which must still be considered high in comparison to his many predecessors), momentum in changing Japan’s security system will only sustain and be tolerated as long as the current administration is able to deliver on its socio-economic policies, a lesson Abe learned from his short-lived term in office in 2006-7.

Sebastian Maslow, is a Research Fellow at the German Institute for Japanese Studies Tokyo (DIJ). His research focuses on Japan’s security and defence policy and the role of North Korea in the evolution Japan’s security system. Image credit CC by Ganden/Flickr.