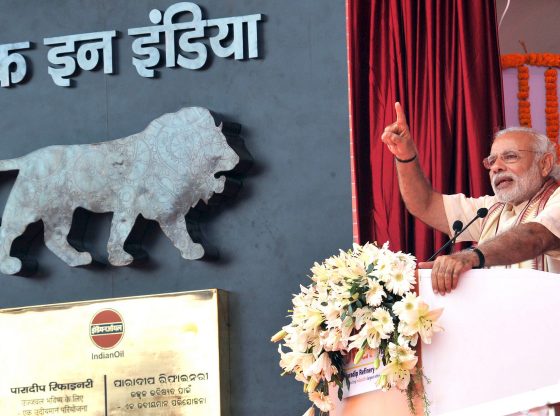 In his eighteen months in office, Narendra Modi  has spent a great deal of time travelling. He’s been to the United States twice, to France, Germany, China, Australia, Canada, Japan, Ireland – twenty-eight foreign visits in all. This week he’s making his first visit as prime minister to Britain, at a time when concern is rising in India about religious and political intolerance and what critics regard as a majoritarian style of governance in which minorities are at a disadvantage.

There seems to be a personal imperative behind Mr Modi’s globe-trotting. The United States and Britain both placed Mr Modi in what amounted to quarantine for several years because of concern that as chief minister of the state of Gujarat, he bore some responsibility for the communal violence there in 2002 which left hundreds dead. The US only made clear that it was lifting this diplomatic isolation early last year, weeks before Mr Modi’s Hindu nationalist party, the BJP, won an emphatic election victory.

550 million votes were cast in India’s 2014 general election, the biggest democratic exercise in the world. The BJP got 31% of the vote. It doesn’t sound a big share – but given the regional complexities of Indian politics, it translated into an overall majority in the Lok Sabha, India’s equivalent of the House of Commons, and the humbling of the Congress Party, which has dominated Indian politics since before independence. Indeed, this was the first time a non-Congress party had won a clear majority in Parliament.

As leader of the world’s biggest democracy, Narendra Modi found that doors which had been closed to him were now wide open. He had a clouded reputation to dispel and he has done well on the world stage. When President Obama made a warm, personal endorsement of Mr Modi’s inclusion as one of Time magazine’s ‘100 Leaders’, this was an emphatic statement that India’s new prime minister was welcome at the world’s top table. But in western capitals, diplomats are still endeavouring to understand both the BJP – is it a pluralist party with a religious identity, in the style of Europe’s Christian Democratic parties, or a Hindu revivalist party? – and to make sense of the man who has made the BJP the dominant party in Delhi.

The defining moment in Narendra Modi’s public life was when as a young man he became a ‘pracharak’  in the RSS, the Rashtriya Swayamsevak Sangh. Pracharak could translate as preacher, but that doesn’t quite capture the role; pracharaks are full-time workers for the RSS, but although this is not a religious post, it certainly involves an element of renunciation. Most pracharaks are celibate, vegetarian and tee-total; the role is not life-long, but it is a vocation not simply a job.

The RSS is the most powerful, and probably the most opaque, mass movement in Indian public life. It has millions of members, and is at the heart of a network of Hindu nationalist organisations of which the BJP is also part. The RSS doesn’t control the BJP, but it has a huge amount of influence as the dominant force within the ‘sangh parivar’. This is the family of organisations which embrace Hindutva, a complex notion which is as much secular as religious, founded on the belief that India’s Hindus – which make up four-fifths of the population- need to be more assertive and cast off the burden of centuries of Muslim and then colonial rule.

India’s prime minister is from a modest background. His father at one time ran a tea stall in a small town in Gujarat. He came across the RSS as a child; he was still a teenager when he had an arranged marriage to a woman a year or two younger. They are still married, though Narendra and Jashodaben have not lived together for more than forty years. For decades in public life, Mr Modi managed to keep his marriage a secret. The first acknowledgement that he had a wife was as recent as last year – when he filled in the column about marital status in his election nomination papers. He walked out of the marriage in the most literal of senses; he left to spend a couple of years wandering around India, visiting ashrams and pilgrimage sites – and at around this time became a worker with the RSS.

It’s not unusual for the RSS to assign pracharaks to political duties with the BJP; it is unusual for pracharaks to reach the most senior ranks of the party. Narendra Modi has proved himself to be very effective within the party, and one of the most successful campaigners and orators that modern India has seen. There is still a tinge of asceticism in the way that he conducts himself. On winning the election, he promptly and publically sought his mother’s blessing – but she and other family members watched the inauguration ceremony on TV rather than attending in person. Mr Modi has repeatedly declared that he gives all his time to serving the nation, not even taking fifteen minutes off from that task. He has no obvious hinterland, no hobbies, enthusiasms, pastimes, at least none that he has shared with India’s public. He is not at the beck-and-call of the RSS but it’s a fair assumption that he remains loyal to its political philosophy.

Yet this political leader in his sixties, in many ways a conservative and traditionalist, has embraced the digital arena more successfully than perhaps any other top rank politician – not simply in India, but anywhere. During last year’s election campaign, he addressed more than seven-million people in total by hologram – not simply an election device, but an example of the digital India he so often spoke about. When voting ended, he had four million followers on Twitter. Among the top election tweets was a Modi selfie with ink-stained finger after casting his vote. His supporters could use a special app to have their own ‘selfie with Modi’. This was not simply about having an innovative campaign team – he really does get digital.

This showmanship has continued in Mr Modi’s time in office. The Wall Street Journal described the photo he took in China with premier Li Keqiang as ‘the most politically power-packed selfie in history’. When he travels, he performs for the Indian diaspora almost as if a rock star – 18,000 at New York’s Madison Square Garden, 50,000 at Dubai’s cricket stadium, and 60,000 expected at Wembley stadium on Friday (Nov 13th) for what organisers modestly describe as the biggest gathering on British soil for any foreign leader apart from Nelson Mandela and the Pope.

The prime minister’s popularity among the Indian diaspora seems to be holding up better than his standing at home – at least to judge by the resounding defeat the BJP has just suffered in one of the biggest states, Bihar, where the party won more than half the Parliamentary seats in last year’s general election.   There are particular reasons – Gujarati pride, Hindu revivalism, hope of a resurgent India, enthusiasm for business-friendly policies – why many Indians abroad are so enthusiastic about Narendra Modi. But the British MPs who have been invited to the Wembley rally will have reason to reflect on how this most enigmatic of politicians has proved to be such a crowd-puller and vote-winner, and what that means for India’s democracy.

Dr Andrew Whitehead is an honorary professor at the University of Nottingham. He has been the BBC’s India correspondent and the Editor of BBC World Service News. He is the author of A Mission in Kashmir (2007), which uses personal testimony to look again at the origins of the Kashmir conflict in 1947. Image credit: CC by Narendra Modi/Flickr