Why Indians abroad succumb to ‘Modimania’ 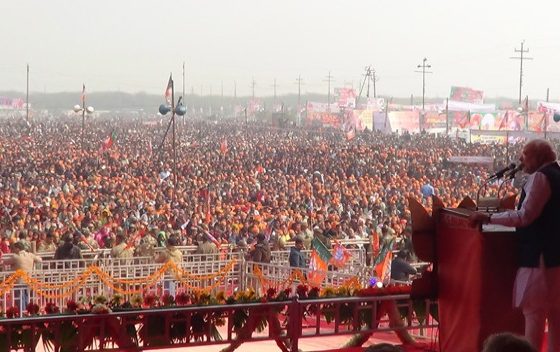 “Of all the world leaders who have visited Britain, only Nelson Mandela and the Pope have addressed bigger public gatherings than Narendra Modi’s rally at Wembley,” boasts a spokeswoman for the UK Welcomes Modi organisation.

It is billed as a grand community reception, and 60,000 Modi supporters – almost all of Indian origin – are expected to crowd into the sports stadium in north London on Friday afternoon.

It will be his first visit to Britain as prime minister and many in the Indian community have been eagerly awaiting this moment.

Wherever Mr Modi goes – and he has spent a lot of time globetrotting in the 18 months he has been in office – he seeks to talk directly to the Indian diaspora.

He has drawn huge crowds at venues ranging from New York’s Madison Square Garden toDubai’s cricket stadium, as well as many smaller events in places ranging from the Seychelles to Paris.

The gathering at Wembley just a few days after the Hindu religious festival of Diwali is expected to be his biggest yet.

The organisers say they can’t meet the demand for the free tickets.

The cost is being met largely by donations – 10,000 people are said to have contributed – along with businesses that are both supporting the event and paying to advertise.

Not all the 1.5m people of Indian origin living in Britain are cheerleaders for Mr Modi and his Hindu nationalist party, the BJP.

A Modi Not Welcome campaign is organising protests during his visit, complaining of religious intolerance and an autocratic style of government.

Part of his purpose, say these campaigners, is to create a worldwide network of Hindu right-wingers – something they regard as worrying.

But there is broad enthusiasm among the Indian diaspora for Narendra Modi. Here’s why:

The courting of Indians abroad is in part about money. The 30 million Indians living outside the country contribute an estimated $70bn (£45bn) to the economy each year in remittances.

Narendra Modi has already taken steps to encourage diaspora investment in India, as well as making it easier for those with foreign passports to spend time in what many regard as their mother country.

Some wealthy Indians overseas are also said to contribute generously to political parties back home.

Political financing in India is notoriously murky, and views differ about how important diaspora money is to the BJP – but academic experts say there is little doubt that right-wing movements do well from this source of funds.

While in London, Narendra Modi will want to remind David Cameron that India may prove a more reliable Asian ally than China, whose president, Xi Jinping, recently enjoyed a conspicuously successful trip to Britain.

As a head of government, Modi won’t get the full pomp and pageantry that greets heads of state such as President Xi.

And while the British government’s overture to China is seen as a bold and distinctive foreign policy initiative, there’s not the same diplomatic buzz about the Indian leader’s arrival.

But British MPs and political leaders – many of whom are being invited to the Wembley event – are bound to be impressed by Narendra’s Modi’s ability to mobilise large numbers of supporters.

It is not often a UK politician attracts a stadium-size crowd.

Andrew Whitehead, a former BBC India correspondent, is honorary professor at the University of Nottingham and at Queen Mary, University of London. This article originally appeared on the BBC on the 10th November 2015. Image taken from Creative Commons.