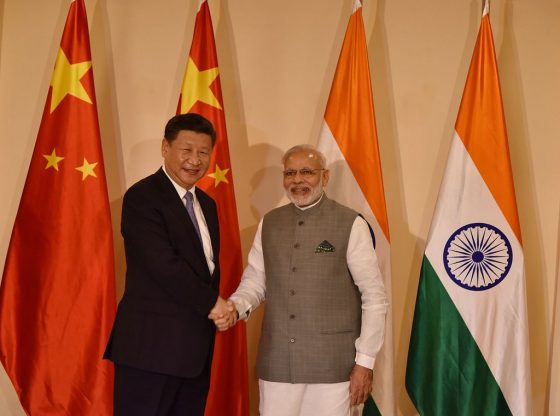 As Narendra Modi completes an year and a half as India’s prime minister with more globetrotting (this time to the UK and then on to Turkey, Malaysia and France for the G20, ASEAN and Global Climate Change summits), one wonders if behind the bravado and public relations glitz, doubts are beginning to creep in. How far can aggressive salesmanship and slick image promotion go in providing effective national and international leadership and changing ground realities both abroad and at home?

It remains to be seen if the unexpectedly crushing defeat suffered by Modi’s Hindu nationalist Bharatiya Janata Party (BJP) in the crucial state elections in Bihar serves as a chastening reality check for a leader unused to electoral defeat. The defeat in Bihar came at the hands of the Mahagathbandhan (Grand Alliance) of the Janata Dal (United) of Chief Minister Nitish Kumar (who only ended a decade and a half of alliance with the BJP in 2013 because of his opposition to the rise of Modi), the Rashtriya Janata Dal of ex-chief minister Lalu Prasad Yadav, Nitish’s long-time rival, and the Indian National Congress (INC), that may have led India’s government for 54 of the 68 years since independence but had been relegated to the margins in Bihar for 20 years. By combining forces, the parties belonging to the notoriously fractious erstwhile Janata socialist tradition in Indian politics consolidated support among the historically underprivileged but numerically strong Backward Class and Dalit (or ‘untouchable’) castes and Muslims to successfully prevent the BJP, allied to three splinter Backward Class and Dalit parties, from winning power in Patna.

Following upon the remarkable success of Modi’s presidential style campaign in the 2014 Lok Sabha elections, the BJP’s attempt to continue to capitalise on his charismatic appeal in the state elections this year failed dismally in the face of the more potent attraction of dynamic reformist state level leaders – anti-corruption campaigner Arvind Kejriwal of the new Aam Aadmi (Common Man’s) Party in Delhi and Nitish Kumar in Bihar. The electoral setbacks also demonstrated that adept exploitation of social media (to an extent unprecedented in Indian politics) and the razzmatazz of mass rallies, both domestically and of Non-Resident Indians (NRIs) abroad, have limited impact in changing political realities. In an instance of the gap between reality and virtual reality, Modi’s otherwise constantly updated glossy official website (http://www.narendramodi.in/, available in Hindi, English, eleven other Indian languages as well as Chinese, Japanese, Russian and Spanish), carried no mention of the election results in Bihar on the day they came out.

Like many national leaders, the Indian prime minister has found it easier to make an impression on the world stage rather than maintain his run of political success domestically. Between his swearing in May 2014 and his return from his second visit to the United States at the end of September 2015, Modi visited 26 countries (including Brazil, Japan, Australia, France, Germany, Canada, China, South Korea and Russia) spending about one week in every seven abroad. He also hosted 21 foreign heads of state and government and, in October 2015, the Third India-Africa Forum Summit in New Delhi.

A veteran Indian journalist observed how Modi plans his foreign trips as if he was conducting an election campaign. As another puts it: ‘Global diplomacy for this Prime Minister is a perfect blend of patriotic kitsch, nationalist pride and simulated intimacy’. This has succeeded in raising his own and India’s international profile, especially given the striking contrast with his predecessor, Manmohan Singh, who was self-effacing to a fault.

However, a foreign policy of attention grabbing salesmanship is unlikely to deliver long term diplomatic gains unless matched by painstaking patient groundwork in forging lasting international relationships, economic, political and military. In the South Asian context the results have been mixed. Despite the initial grand dramatic gesture of becoming the first prime minister to invite the leaders of India’s subcontinental neighbours to his swearing in, relations with the old foe, Pakistan, have since deteriorated as have, more surprisingly, those with Nepal. In both cases, always delicate ties have been handled with little finesse. In August 2014 a possible resumption of a formal dialogue on bilateral issues was called off after the Pakistani High Commissioner in Delhi met with Kashmiri separatist leaders and this was followed by the worst border clashes in over a decade. In September this year, just ten months after Modi made the second of two visits to Nepal, receiving an overwhelmingly enthusiastic response, Nepali public opinion was alienated by India effectively imposing an economic blockade on the Himalayan republic when the country’s constituent assembly passed a constitution denounced as discriminatory by many Madhesis, inhabitants of the southern plains bordering India.

A parallel can be made with Modi’s approach to bringing about change domestically. The past year has witnessed the launch of a proliferation of campaigns with catchy slogans including Swachh Bharat Abhiyan (Clean India Mission), Smart Cities Mission, Digital India and Skill India initiatives, ‘Start-up India, Stand Up India’ (job creation), and Make In India. Lavishly covered in the media, Modi has, with some success, sought to win backing from corporate India and high profile public figures such as film and sports stars. It is framed to appeal especially to younger, wealthier and urban Indians (also more likely to belong to middle and upper castes), as well as NRIs, attracted by the projection of a modern, dynamic, prosperous and assertive India on the rise globally.

The tangible progress of these campaigns depends upon maintaining high levels of economic growth (7-8 per cent in 2015-16) which in turn depends on political stability and the government’s capacity to deliver change and reform. Here the BJP-led National Democratic Alliance (NDA) government has found itself stymied. Opposition parties have united in blocking legislation to introduce a streamlined national sales tax and making it easier for businesses to acquire land from farmers and hire and fire workers. Despite victories in state elections in late 2014 in three states returning the first BJP chief ministers in the history of Maharashtra, India’s second biggest state, and Haryana, the NDA holds power in only a dozen of the 29 states and therefore little more than a quarter of the seats in the upper house of parliament, the Rajya Sabha. Even in the Lok Sabha, the lower house, where the NDA has a comfortable majority opposition MPs have repeatedly succeeded in disrupting proceedings.

Parliamentary opposition to the Modi government has been stoked by anger at a succession of public controversies arising from emboldened Hindu nationalists provoking controversy by their aggressive promotion of campaigns to reform public and cultural life. These have included ghar vapasi (return home), a campaign to convert Muslims and Christians to Hinduism; violent efforts to prohibit the eating of beef even resulting in the killing of a number of Muslims; the murder of several secular thinkers; and attacks ontourists for allegedly profaning Hinduism. Such activities, as well as government moves to place Hindu nationalist sympathisers in charge of national cultural and educational bodies such as the Indian Council of Historical Research and the Indian Film and Television Institute, have unleashed a furious backlash from academic and cultural figures opposed to what they see as the threat to India’s secular and pluralist ethos.

In their aggressive national and global marketing of ‘Brand NaMo’, the BJP and its parent organisation, the Rashtriya Swayamsevak Sangh (RSS) and its affiliates,  have sought to gain the space to realise their vision of remaking India into the Bharat of chauvinist Hindu nationalist imagining. Nationally the BJP maybe discovering the limits of the waning appeal of the talismanic Modi brand – it will certainly be tested over the next eighteen months when nine Indian states, only two of which are currently ruled by the NDA, go to the polls. Internationally, Narendra Modi could also find on his travels that his efforts to sell India maybe incompatible with pursuing a ‘Hindu’ Bharat.

Dr James Chiriyankandath is Senior Research Fellow at the Institute of Commonwealth Studies, University of London, and Co-Editor of Commonwealth & Comparative Politics. This article forms part of an Institute of Asia-Pacific Studies special issue on Hindu nationalism in India. Image credit: CC by Narendra Modi/Flickr.