“They Are Not Colonies but Jails”: Indian Indentured Labour in Colonial Mauritius, 1852-1900 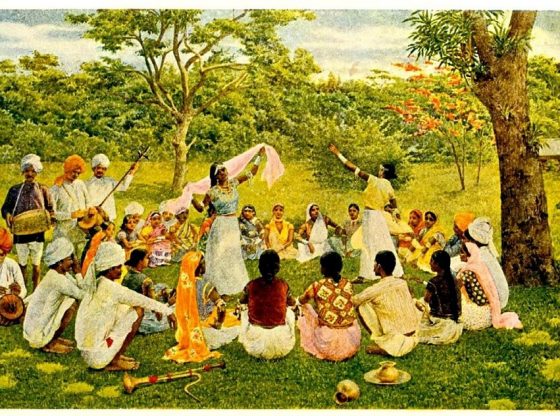 By Sascha Auerbach, Department of History, The University of Nottingham

To understand the rationale for the research conducted with the generous aid of IAPS seedcorn funding, a little background on the topic of study is necessary. Today, the constant flow of population across the globe—whether as workers, visitors, or refugees—is a common feature of life.  In attempting to understand the historical origins of this, scholars have focused primarily on two topics.  The first is the history of transatlantic slavery and the second is the emigration of free European labour.  Both processes were key to the organization and development of diverse societies in both the Pacific and Atlantic Worlds in the nineteenth century.  In contrast to these topics, study of the long-distance migration of labour from southern, eastern, and southeastern Asia remains a tertiary subject of historical inquiry.  This migration, at its height, involved the movement of more people farther and faster than witnessed in any previous period of human history.  Chinese and Indian labourers built and worked the plantations, mines and railroads that formed the backbone of the nineteenth-century economies in European colonies.  They transformed the character of their societies at their destinations in the Caribbean, the Americas, southern and eastern Africa, and Australia, even as their departure helped reshape the history of their communities and regions of origin.  These migrants, whether they returned home or settled at their destinations, forged powerful and enduring connections between these disparate locales, constituting one of the first truly global labour forces in human history.

At the centre of this vast phenomenon was the indentured labour system.  This legal and economic institution underpinned a global network of recruitment, transportation and labour management.  Its establishment in the wake of abolition in the British Empire was one of the most significant social and economic developments of nineteenth-century imperialism.  Through it, millions of Indian and Chinese “coolies” were incorporated into the agricultural and industrial workforces of European empires, those of the British, French and Spanish most especially.  From the goldfields of Australia to the cane fields of Mauritius to the rubber plantations of Malaysia, millions upon millions of Chinese and Indian workers, locked into long-term contracts and subject to harsh regimes of labour discipline, filled the roles once occupied by slaves.  But these men and women were not slaves.  They brought with them their own ideas about identity, work and society and their own conceptions of their rights within this system of semi-coerced labour.  The history of these regions is their history as well, and its traces remain everywhere, from the first mosque in the Americas (built by Indian immigrants to the canefields of British Guiana) to the bustling Chinatowns of Kingston, Capetown and Sydney, to the century-old Buddhist shrine recently discovered behind an abandoned railroad line in suburban New York.

Thanks to the support of IAPS seedcorn funding, my current research project to explore this fascinating history and its connections to labour rights and activism in Britain itself has advanced considerably.  This work was conducted by the current holder of the IAPS/History Ph.D. studentship, Freddie Stephenson.  Originally, the task was to transcribe material about the legal structure and daily experience of indentured labour in the Indian Ocean sugar-colony of Mauritius.  These primary-source records were collected on a previous archival expedition supported by funding from the Canadian Arts and Humanities Research Council.  The amount of material proved too rich and detailed for full transcription, and we opted instead to build an annotated catalogue of primary-course documents, which covers the period from 1850-1900, the height of indentured labour in Mauritius.  The results have offered a fascinating window into the daily contestation of labour conditions between Indian indentured labourers, sugar plantation managers, and the local magistrates who arbitrated their disputes.  Freddie’s work has highlighted key aspects of the archival record, allowing me to pinpoint my own investigations into the connections between labour regimes, law, and the dynamics of race and class across the British imperial system.  As an ancillary part of this project, he also investigated the records of how the parallel legal system in London and Mauritius (the magistrates’ courts) operated to mediate the lives of labourers in both locales.  One particularly useful discovery has been the common themes of dispute among both Mauritian indentured labourers and working-class Londoners.  This suggests that the conditions of labour themselves may have shaped the experience of workers similarly even in very disparate aspects of the British imperial economy.

The research effort supported by the IAPS seedcorn funding has already achieved considerable recognition, allowing me the opportunity to promote the IAPS program and the University of Nottingham to leading scholars in international labour history.  I was invited to present aspects of my work on indentured labour to an international workshop on the “coolie question” at the University of Sydney last spring.  Although the focus in that presentation was the Caribbean rather than Mauritius, the availability of the Mauritian research allowed me to put the topic into a global context and to discuss the similarities and differences between indentured labour in the two regions.  This presentation, in turn, has led to a subsequent invitation to join a panel of international experts at the 2016 Annual Meeting of the International Society for the Study of Chinese Overseas, which will meet this July in Vancouver.  At the moment, I am also incorporating the Mauritian research into several funding bids, and drafting a major research article as well.  In sum, support from IAPS has proved crucial to the substantial advance of this research project, and I look forward to the progress and recognition that will continue to accrue in the next year and beyond.

The two sides of the Strait need each other, regardless who rules in Taipei
How Chinese mix of frugality and risk-taking is driving global stock markets wild