On Disasters and the Yolanda/Haiyan Experience 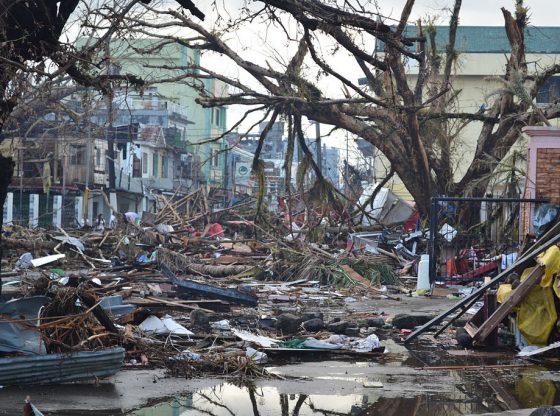 Since 2000, natural disasters, it seems, have become a commonplace in the Philippines more than ever—not simply in terms of numbers, but also in terms of magnitude. Many studies and reports, both national and international, have already highlighted the geographical exposure of the Philippines, which makes it a disaster-prone country. A recent report of Harvard Humanitarian Initiative Resilient Communities Program notes the frequent calamities in the Philippines due to typhoons and floodings, as well as volcanic activities and earthquakes. Meanwhile the Deutsche Welle news agency has called the Philippines ‘a country prone to natural disasters’.

The United Nations Office for Disaster Risk Reduction (UNISDR) and the Belgian-based Centre on the Epidemiology of Disasters (CRED) identified the Philippines as the fourth most disaster-prone country in the world with 274 natural disasters recorded from 1995 to 2015. In 2014 alone, Typhoons Rammasun (locally named Glenda) and Hagupit (locally named Ruby) displaced around 2.99 million and 1.82 million people, respectively. Given these figures and situation, it becomes imperative that the Philippine government, including the local levels, must have disaster prevention, preparation, mitigation, and response mechanisms.

Typhoon Haiyan (locally named Yolanda), the most recent typhoon that devastated a number of provinces in the Philippines, can be considered a test case for the government’s preparedness to respond and mitigate the effects of a disaster. However, as reported by various media organisations in the Philippines and around the world, the strength of the typhoon was overwhelming that the preparations made by the government were simply not enough. According to official statistics the typhoon left 6,300 fatalities and displaced around 800,000 families.

Republic Act No. 10121 or the ‘Philippine Disaster Risk Reduction and Management Act of 2010’ outlines the duties and responsibilities of the different levels of government when it comes to disaster prevention, preparation, mitigation, and response. Aside from strengthening the national lead agency, the National Disaster Risk Reduction and Management Council (NDRRMC), the law also empowers the lower levels of government through NDRRMC’s local counterparts at the regional (RDRRMC), provincial, city, municipal, and even barangay levels (the LDRRMCs). This setup follows the decentralised framework that characterises Philippine political organisation.

So, who is supposed to take charge in a post-disaster situation? According to Section 15 of RA 10121, the concerned LDRRMC should ‘take the lead in preparing for, responding to, and recovering from the effects of any disaster’. Assuming that a disaster affected only one municipality or city, the responsibility lies with the local government unit and its LDRRMC. The national government can only provide support later, perhaps through additional assistance from relevant executive departments. In the case of Typhoon Haiyan, the LDRRMC of Tacloban is the primary response unit. It should have taken the lead in disaster response and rescue. However, the typhoon did not only hit Tacloban. It wrecked havoc and destruction on other local government units in the Province of Leyte, other nearby provinces in the region, and other regions in the central Philippines. If this is the case, should the national government come into the picture?

In the event that two or more regions are affected, the law is clear: the NDRRMC shall take the lead. The assumption here is that the local government units and their LDRRMCs were also affected by the disaster. Videos and photographs of the devastation brought by Typhoon Haiyan show how much was taken and how much was left. It might be unreasonable for the national government to demand action from local governments if the latter is also victims of the disaster. The logic of the law is clear. The ‘ping-pong’ of responsibilities between the national and local governments could have been avoided. But politics behind the personalities involved, i.e., the president, the interior secretary, and the city mayor, also played a role in the disaster response and relief operations.

More than two years after the disaster, recovery and rehabilitation are still taking place. The experience of Typhoon Haiyan should serve as a lesson for both national and local governments. There will be typhoons and other disasters that will come. These could be attributed to the worsening climate change. However, its effects cannot be reversed. Governments can only prepare, implement mitigation mechanisms, and once disasters are there and gone, respond. Finally, given the limited amount of resources and time, personal politics should not get in the way of response and relief for the victims of disasters.

Jan Robert R Go is an Assistant Professor in the Department of Political Science at the University of the Philippines, Diliman. He is a researcher with the ESRC/Dfid funded project ‘Poverty Alleviation in the Wake of Typhoon Yolanda. Image credit: Wikipedia Commons.