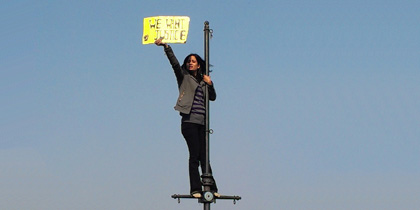 Our 2015/16 Tomlinson Lecture speaker is Kavita Krishnan. Kavita is the Secretary of the All India Progressive Women’s Association and a politbureau member of the CPI(ML) Liberation Party in India. She is a prominent feminist, left activist and campaigner on a range of interrelated issues, in particular women’s rights in India.

Kavita came to international prominence as a vocal campaigner following the brutal gang rape of a student in Delhi in December 2012. The brutality of the rape and the subsequent protests attracted the attention of the national and global media as well as national and global expressions of condemnation of rape and sexual violence. The protests in Delhi were broadcast around the world. The government, initially slow to respond, convened the Justice Verma Committee to recommend measures to address issues of violence against women. The Committee consulted a large number of activists and organisations in a very short space of time and came up with far-reaching recommendations, referred to by a feminist legal scholar as ‘a manifesto for radical transformation’. The government adopted some but not all of these recommendations, first passing a government ordinance followed shortly by the Criminal Law Amendment Act 2013. This act included new provisions on forms of rape and sexual assault and other forms of gender-based violence such as acid attacks and stalking. Campaigners protested several important omissions in the ordinance and legislation, including that of marital rape, a form of sexual violence that is still not recognised in the Indian penal code.

In the coverage of the protests and subsequent public debates in the national and global media, Kavita encouraged us to challenge the victim-blaming that often follows incidents of rape and sexual assault, including questions about why the victim was out late at night or in a remote area or dressed in a certain way. Kavita criticised so-called ‘solutions’ that sought to increase male control over female bodies in the name of protecting women and ensuring ‘women’s safety’. She suggested instead that women should be free to move around without the fear of sexual violence and should not be restricted and confined to the home by their male relatives. Rape, sexual violence and other forms of gender-based violence that occurred within domestic spaces, including marital rape, would not be eradicated by exerting control over the mobility of women and girls. Kavita also warned that increased surveillance in public places might be used by state authorities to harass and blackmail young couples. In the UK, some of the media coverage was criticised for suggesting that rape and other forms of sexual violence were a problem specific to India and were accused  of neo-colonial depictions in their coverage of the Delhi gang rape while ignoring the prevalence of rape, sexual violence and a broader culture of victim-blaming prevalent in the UK. Kavita Krishnan also countered this problematic representation by emphasising how movements around the world challenged rape culture and other forms of patriarchy in its specific forms in their respective locations.

In September 2013, four of the accused in the case were convicted and sentenced to death for gang rape and murder. Of the remaining two accused, one had previously died in custody earlier in March and another had been convicted in a juvenile court shortly before in August. Almost two years later, in March 2015, a BBC documentary called India’s Daughter about the December 2012 gang rape and murder was banned by the Government of India shortly before its first screening on an Indian television news channel. The documentary was seen as controversial for different reasons. The producer of the documentary had interviewed one of the convicted accused while he was on remand in Tihar jail, prompting criticisms that the documentary makers were given privileged access to the convicts and the airtime to be given to his account of events could potentially normalise sexually violent attitudes. For some, it was not just his account but also that of his lawyer, also shown in the documentary, that suggested a rape culture of victim-blaming and thus a lack of culpability or regret by the perpetrators of sexual violence.

Kavita Krishnan was interviewed for the documentary but subsequently criticised it on a number of counts. Its name, ‘India’s Daughter’, invoked a kind of ‘patriarchal protectionism’ of women and girls as daughters that the campaign had sought to reject. The kind of privileged attention it was getting in the global arena, however well-meaning that attention may be, often came across as patronising rather than as an expression of solidarity. The too-narrow focus on the case failed to connect it to the wider issue of rape culture. Kavita joined a number of prominent feminist activists, scholars and lawyers including, among others, Indira Jaising, notably the first woman to be appointed as Additional Solicitor General in India, prominent human rights lawyer Vrinda Grover, and respected feminist historian and publisher Urvashi Butalia, in articulating their concern at the proposed broadcast of the documentary. They submitted an open letter to NDTV, the news channel planning to broadcast the film, seeking a postponement of the documentary. They argued that screening the documentary would prejudice the outcome of an appeal filed by the accused against their conviction and death penalty, which amounted to an obstruction of justice for both the rape victim and the accused. They also suggested that the broadcasting of particular content would amount to hate speech against women. They sought to strongly disassociate their reasons from those of the Hindu nationalist party in government, who had argued that the documentary would tarnish the image of India. There were also some alternative views on the documentary’s ban articulated by other notable Indian feminists, including those also on the Left (some examples can be found here, here, here, and here; and read documentary maker Leslee Udwin’s response to the ban).

Subsequent to the Delhi protests and debate, Kavita gave several talks on the anti-rape campaign in India and reflections on transnational solidarity in the global movement addressing violence against women. Kavita continues to play a leading role in the women’s movement in India and participates in demonstrations of solidarity across a range of issues and movements in both India and abroad. Kavita has been a prominent critic of Hindu majoritarianism or Hindutva, the political ideology associated with the ruling party of the incumbent national government in India, particularly in relation to its ideas about gender. She is also a strong critic of neoliberal economic policies both in India and across the globe, and makes connections between such policies and the violence that is perpetrated along gender, caste, and religious lines. She is a former student activist with the All India Students Association (the student wing of a political party) and a former Joint Secretary of Jawaharlal Nehru University Student Union, where she gained an MPhil in English Literature. She tweets at @kavita_krishnan

Carole Spary is an assistant professor at the School of Politics and International Relations at the University of Nottingham. Image: Delhi protests – Another lamp-post revolutionary © Nilanjana Roy.