Dangerous Freedoms: Some thoughts on Gender, Caste and Development in India

Home /Asia/South Asia/India/Dangerous Freedoms: Some thoughts on Gender, Caste and Development in India 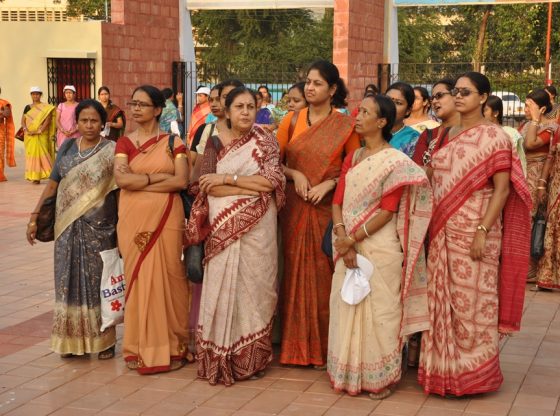 Gender violence cannot exist on the scale it does in India unless there is endorsement and social sanction for it or at least for the conditions that breed violence against women. To understand better the idea of social sanction, I suggest we see gender violence, not only as the horrific acts of sexual assault, rape and torture that seize public attention and evoke visible protests and outrage, but as a spectrum, a continuum of everyday practices that are part of the ‘normal’, the ‘routine’ and the ‘taken-for-granted’ as we experience it. Take, for instance, the pervasive tolerance for street sexual harassment or ‘eve teasing’, its rationalization or indulgence as a form of masculine sport associated with the young, an upsurge of ‘young hot blood’ or a legitimate exercise of manhood. Or take the condoning of ‘domestic’ violence or violence within households. In a Tamil movie released in 1959, a popular song ‘adikkira kai thaan anaikkum’ (the hand that hits also embraces) has a drunkard alternatively beat and embrace his wife who weeps her way through the song even as she supports her staggering husband! The notion that women are fully human autonomous actors is a radical idea that still does not find purchase in many parts of India. But how do we account for the failure of this idea to take root and flourish in India more than sixty years into the life of the Indian republic? Perhaps some of the answers might be sought in the nature of development and capitalist modernity in India and the paradoxes and contradictions they have spawned for Indian women.

Social science research shows us that when state-sponsored development interventions/projects intersect with community and household patriarchies and ‘commonsense’ notions about the proper place of women in society, the outcomes are complex and unpredictable. They do not follow linear trajectories of modernity and progress. Take the case of the agrarian households in several parts of India that have gained a measure of economic prosperity due to developmental policies that include infrastructure growth (new roads and highways), state promotion of high-yield crop cultivation, subsidized bank credit, support prices for crops or access to new markets. These households signal their upward economic mobility through the withdrawal of women from the workforce and their seclusion within the household. The women partake in the relative affluence of their households, but experience a trade-off in terms of the loss of economic independence and autonomy and the socially valued and visible status of paid workers. Even where women have won the right to higher education and to participate in paid employment, what choices does this translate to for them? In a paper written in the late 1990s, the economist Nirmala Banerjee points to an emergent and growing class differentiation amongst women in India, given that a minority of women, belonging to the upper middle and upper classes have secured professional education and experienced an expansion of their life-worlds. She asks, provocatively, if the class-derived differences amongst women are more apparent than real, given the enormous social anxieties there are across classes to contain young women’s sexualities within the ‘safety’ of family-arranged marriages.[1] 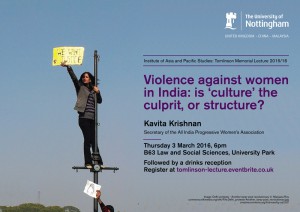 Banerjee’s poser is particularly resonant when we consider the ‘choices’ that were available to Divya, a young woman from the Vanniyar caste, an intermediate backward caste of Dharmapuri district (Tamil Nadu) who fell in love and eloped with a young Dalit, Ilavarasan. Divya, who had clearly enjoyed some degree of personal mobility and professional education as a nursing student, discovered to her cost and that of the man she chose, that her freedoms did not include the right to love or to choose a partner across caste lines. Divya’s elopement with Ilavarasan resulted in the burning down of around 250 homes in three Dalit hamlets following the suicide of Divya’s father, apparently shamed by his daughter’s refusal to leave her husband and return to her natal village in conformity with the caste panchayat’s ruling that she do so. A year after their marriage, when Divya suddenly left Ilavarasan, allegedly under pressure from her mother and other kin, Ilavarasan’s mutilated body was found near a railway track. What Divya’s case illustrates is that caste patriarchies act as intermediaries/brokers between women of particular caste groups and their constitutionally guaranteed rights. They decide what rights women may access and where the lines must be drawn. And the stakes have always been high. The sexual control of women of the dominant castes and land-owning classes – the enforcement of their sexual ‘purity’ – has, historically, secured the transmission of property from father to son and the purity of the bloodline (and therefore also of caste). A vital ingredient of a deeply stratified social order, this control is central to reproducing caste and class dominance.

The continuing control of women’s mobility and sexual and reproductive lives and choices in post-independence India is thus hardly incidental. What is interesting is that the re-assertion of clan, caste and community control over women has come to be seen as urgent and pressing in the face of new developmental trajectories that offer the possibilities of challenge to the status quo, of resistance and defiance by subaltern groups and by women. For instance, researchers situate the growing intolerance of the dominant and intermediate backward castes to ‘love’ marriages and cross-caste elopements in Tamil Nadu with reference to the shifting patterns of labour and livelihoods, the increased migration of the young in search of employment, the diversification of jobs that make it possible for the Dalit poor to refuse degrading agricultural labour on farms and fields and the growing work-related mobility of young Dalit men from rural areas to small towns.[2]In some North Indian states, traditional, male-dominated community organizations such as the Khap Panchayats have objected to and sought to ban the use of mobile phones by young women, a move that hints at the enormous anxieties at play. These include the fear that the new technologies and the new public spaces outside the household that women have come to inhabit may foster dangerous liaisons and connections that threaten an existing social order. In the face of the severe and ongoing backlash against women who seek to exercise ‘dangerous’ freedoms, we might ask, following Banerjee, if the emancipatory possibilities opened up by higher education and employment are more apparent than real for women, more specter than substance.

The state is not a neutral spectator to any of the developments discussed here. The signals it sends out to social actors and entities on the question of women’s right to an autonomous existence and to identities not defined by male kin or household-based relationships are incredibly important. For instance, women were not granted an independent status by economic development programmes for over three decades after independence. India’s famous Green Revolution (1967-1978) targeted its package of seeds, fertilizers and bank credit to men, re-instating them in their ‘natural’ role as household head and disregarding the overwhelming evidence of women’s work in agriculture on family-owned or leased land. The distribution of land by the state to the landless poor, wherever this has happened, has usually meant endowing men with land. Independent land titles for women in their own names was seen as a dangerous demand as it could give women the means to quit unhappy marriages and abusive partners and send out the message that women’s interests and identities cannot be subsumed within family and household interests. More recently, the Indian state has categorically refused to legislate on marital rape despite being urged to do so by the Justice Verma committee that submitted its report in January 2013 (The committee was constituted to recommend amendments to the criminal law so as to more quickly prosecute cases of sexual assault against women). The central government’s refusal to act in this regard sends a socially retrogressive, nonetheless unmissable signal to household, kin and community patriarchies that their suzerainty over the bodies of married women is quite right and may continue undisturbed.

States might act in ways that shore up patriarchy and state developmentalism may intensify the inter-locking inequities of gender, caste and class, rather than dismantling these. But what of progressive social and political movements and parties wedded to inclusive notions of social justice and anti-caste politics? Even when they have condemned the attacks on cross-caste marriages and espoused support for the right of the young to fall in love, equally strident calls for women’s emancipation or the denunciation of patriarchal control over women’s life-choices and sexualities have not been forthcoming. And this is disappointing indeed. For the writing on the wall stares us in the face. To parcel out and ration women’s democratic rights and to permit some entitlements while proscribing others will simply not cut it any more.

Kalpana Karunakaran is an Assistant Professor in the Department of Humanities at IIT Madras. Ideas in this article were first raised on the Gender Violence Research and Information Task force blog available here. Image credit: Wikipedia Commons.

[1] Banerjee, Nirmala (2002) ‘Between the Devil and the Deep Sea: Shrinking Options for Women in Contemporary India’ in Karin Kapadia (ed) The Violence of Development: The Politics of Identity, Gender & Social Inequalities in India, New Delhi: Kali for Women.