The 2012 Delhi protests: towards a scalar analysis 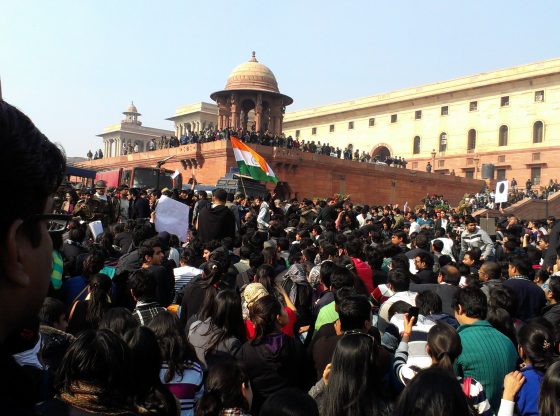 The brutal gang rape and murder of 23-year-old Jyoti Singh Pandey in Delhi in December 2012 has come to constitute a ‘critical event’ in contemporary India. This is largely ascribable to the unprecedented public protests that the event propelled. The protests are one critical and representative moment in a changing landscape of mobilisation in the name of women with significant global currency, insofar as they travelled farther than other events of a similar nature. Operating on a national as well as a global scale and drawing in new actors like middle-class youth and men, such a landscape demands an analysis that is able to capture the spatial and scalar expansion of feminist politics.

Let me, in this short piece, use the mass protests around Jyoti’s rape and murder as a way of thinking through the changing scales and sites of contemporary feminist protest in the global South. The 2012 protests defy the usual labels of ‘field’ and ‘movement’ given their highly contingent, unstable and disparate nature. They might be more productively understood as an assemblage, in Deleuze’s sense.

The protests were constituted by a multiplicity of heterogeneous agents, a large section of whom had no history of political participation, and whose actions were disaggregated across different spaces and sites (the street/the web) and operated on multiple scales (metropolitan/national/global) and even on different temporal registers such as the immediate demand to ‘hang’ the rapists versus the long-term demand for structural change. The protestors represented vastly different currents of thought. So, there was no unified vision of how to combat India’s rape culture. The heterogeneous, shifting, evolving and excessive nature of such a protest made it impossible to know its ‘outcome’ in advance; one that could not be reduced to the agency of the actors involved or to their intentions.

The media, both old and new, played a key role in shaping the manner in which this protest assemblage came together and transformed in its unfolding and even in its aftermath. This is not to say that the media or the Internet created the 2012 protests, but that they would look rather different without their mediation. Not only did the media environment shape and transform Jyoti’s story as it travelled but it also constituted and channelized the outpouring of affective responses to ‘Jyoti’ in particular ways. For instance, at the domestic level, the media served to orient affective responses towards the concerns of the state, and, at the international level, to the global community’s Orientalist reading of the India’s ‘rape problem’. Generally speaking, Jyoti’s gang rape produced a transnational circulation of multiple meanings, some of which reproduced narratives of ‘saving’ Third World women while others inverted these power relations in unexpected ways. The documentary India’s Daughter that I now turn to became a transnational object, par excellence.

Leslie Udwin’s BBC documentary of Jyoti Singh Pandey, India’s Daughter, that showcased interviews with Pandey’s parents and one of the men convicted of the crime, Mukesh Singh was quickly banned by the Government of India for being offensive towards women. More interestingly, the controversy surrounding the film and the ban brought to the fore sharp differences within the Indian women’s movement. Amidst angry dismissals of the film as Orientalist for patronizing ‘India’s daughters’ and predictably linking rape to Third World poverty, critique and censorship converged on the unparalleled screen time the film affords a convicted rapist. Influential Indian feminists called for ‘restraint’ on the film’s release initially on the grounds that Mukesh’s misogynistic statements comprised hate speech against women while later arguing for the rights of the accused to a fair trial. The counter critiques to this feminist position underscored how the demand for ‘restraint’ ultimately fed into the government’s reactionary move to ban the film.

Not only, then, did the film create a new assemblage of discourses, meanings, practices and affects around violence against women, but the government’s attempt to censor it created new capacities of protests even within the media. The private news broadcast channel NDTV telecast a ‘tribute’ to ‘India’s Daughter’ in the form of blanking its screen for a full hour. A final moment in this new assemblage of meanings around ‘Jyoti’ came in the form of the mass lynching of a man accused of rape in Dimpaur in Nagaland, an economically marginalized Indian state in the north east of the country. This event was linked, by metropolitan feminists and the media, to the incitement to avenge sexual violence that both the 2012 protests and the controversy around India’s Daughter had created. ‘Dimapur’ is another key moment in the journey through which ‘Jyoti’ has travelled and transformed in the aftermath of the Delhi gang rape. In tracing this journey, we see how a singular event is transformed and has limitless capacities to assemble meaning, affect and action.

Let me end with a final point about this protest assemblage: dalit feminists were some of the most vociferous critics of the publicity surrounding Jyoti’s gang rape. Their critique was posed on two levels: one, emanating from their struggle to accrue any publicity for the sexual violence that serves to uphold caste hierarchies; and second, for serving to further render their victimisation invisible (in the face of the heightened visibility of violence towards urban, aspirational, upper-caste women). Their critique was not directed at media representations alone but also towards metropolitan feminists. One male dalit feminist called out, for instance, elite upper-caste feminist hypocrisy in questioning the right of a Western woman to make a documentary on Indian women while effectively masking – and thereby naturalising – their own privileged position in the Indian context. There is a long history of the manner in which metropolitan Indian feminists have, much like their Western counterparts, eclipsed from view internal asymmetries of power pertaining to caste-class and sexuality in speaking on behalf of ‘Indian woman’. Consequently, the ‘Hindu middle-class woman, “everywoman”, has become the de facto subject of Indian feminism’, as Krupa Shandilya writes of the protests on behalf of Jyoti Singh Pandey.

Dalit feminist interventions into the Delhi gang rape and its representation in India’s Daughter problematize the idea that the national is the scale upon which authenticity, representation and political solidarity can be built, given the kind of power relations that criss-cross the national field. They also foster solidarity networks across and beyond borders. It is interesting to note that dalit women’s attempts to develop a feminist voice of their own in India have drawn on black feminist politics in the US.

In conclusion, a scalar analysis of the 2012 protests shows complex interactions at national, regional, local and global levels that together ‘produced’ the Delhi gang rape as a transnational object forming the basis of endless knowledge-production around gender and violence. A simple local-global model would not be able to capture or adequately represent the complexity of these transnational connections and modes of meaning-making or, indeed, the deep cleavages that came to mark this unprecedented moment of public consensus around violence against women.

Dr. Srila Roy is Senior Lecturer at the Department of Sociology at the University of Witwatersrand. Image  credit: CC by Wikipedia Commons

Learning Party-speak: What the New Textbook for Dislocated Minority Students Tells us about China
Why doesn’t China want any more ‘weird’ buildings?