Hardman Rodrigo Duterte closes in on the Philippine presidency 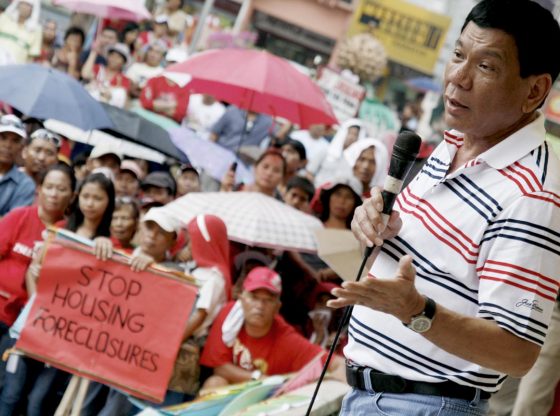 As the Philippines careers towards the May 2016 presidential elections, it looks as if one of the country’s toughest politicians may be about to sweep to power. Rodrigo “Digong” Duterte is currently leading in the polls despite a series of outlandish and outrageous remarks – most recently, a vow to kill his children if they take drugs – and it seems as if it may be too late for any of his challengers to pull off an upset.

Duterte is a qualified lawyer and served seven terms as mayor of Davao City on the island of Mindanao. Under his tenure, Davao City has been consistently highly ranked as a safe city. His governing style has been undeniably effective, but is also highly questionable. Duterte has deliberately cultivated an image as a hardman. He was referred to in Time Magazine in 2002 as “The Punisher”. He freely admits that he is a womaniser – and for a lawyer, he seems to have a tenuous relationship with the rule of law.

Urban myth has it that he made a tourist who flouted the city wide smoking ban eat a cigarette butt and he has no qualms about disciplining drug dealers, petty criminals and recalcitrant taxi drivers with a personal touch. He also has no problem with the Davao City Death Squad, a vigilante group allegedly responsible for the summary executions of drug dealers and petty criminals. Far from it: he has explicitly declared his support, much to the horror of human rights groups.

The controversy doesn’t stop there.

Duterte’s decision to jump into the campaign was triggered by the decision of the Philippine Senate Electoral Tribunal to allow Senator Grace Poe to run for the presidency. The legality of her candidacy had been called into question as she is a “foundling” found abandoned as a baby and therefore potentially not a Filipino citizen. She became a naturalised US citizen US Citizen in 2001, and her husband has had dual US/Filipino citizenship since birth.

Poe’s citizenship reverted to Filipino in 2010, but there were also questions over whether she met the residency requirement of “at least ten years” before an election. For his part, Duterte made it plain he did not want an “American” as president.

This all pales in comparison to his recent comments about a female missionary who was gang raped and murdered in the course of a prison riot in 1989, during his first term as mayor: “I was angry she was raped, yes that was one thing. But she was so beautiful, I think the mayor should have been first. What a waste” – the mayor at the time, of course, being Duterte himself. The comments caused an international outcry. After first dismissing this as just “how men talk”, he finally issued an apology.

So how is it that a man like this looks set to become the next president of the Philippines?

Duterte is a man who just might get things done. Filipinos are weary of promises of significant poverty reduction and pledges to provide meaningful peace and order that never seem to be realised. They are also sick of dynastic politics, corruption and the sense that their politicians care more about feathering their own nests than about making things better for the people.

None of the other presidential candidates offer anything other than a changing of the guard: all are drawn from the elite, sponsored by the elite, and firmly embedded within a narrow network of family dominated dynastic politics.

There is no ideology in Philippine politics – candidates tend to get chosen on the basis of personality rather than platform which means that the country’s elected offices are littered with former actors and showbusiness personalities. And on this score, Duterte is steaming ahead.

When the Philippines found out about the tanim-bala bullet scam at NAIA airport in Manila, in which bullets were inserted into passengers’ luggage so that they could be forced to pay “fines”, Duterte told airport staff that he would make them eat any bullets they were caught planting.

The incumbent president, fourth-generation politician Benigno Aquino III, has even gone on record as saying that the Manila “carmageddon” is a positive thing as it is a sign of growing prosperity – a statement that did nothing to endear him to the capital’s commuters.

Duterte has promised that he will deal with law and order problems in the Philippines within three to six months or hand power over to current senator and vice-presidential aspirant, Ferdinand “Bongbong” Marcos Jr.

Marcos is the son of the previous dictator of the same name, who was ousted via the so called People Power revolution in 1986. Critics have noted that if another Marcos gets voted into a political office a hair’s breadth away from the Philippines presidency, the country will become an international laughing stock – and yet the younger Marcos is currently frontrunner in the vice-presidential election polls.

Nonetheless, it’s easy to see why Duterte’s appeal is still so strong. He offers something to all segments of society – more affluent voters are sick of crime, corruption and traffic, while the less affluent are fed up with politicians who profess their empathy and then do little to bring about meaningful change once they are comfortably ensconced in political office.

It remains to be seen whether Duterte’s comments about rape will deal a blow to his chances. But those voters still backing him enthusiastically should be careful what they wish for.

Pauline Eadie is a University Lecturer in International Relations at the University of Nottingham. This article was first published on The Conversation and can be found here. Image credit: CC by Keith Bacongco/Flickr.

Philippines 2016: Election Day is All Souls Day
How and why China became Africa’s biggest aid donor