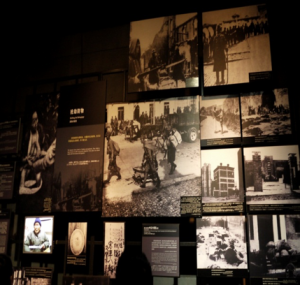 Urban heritage tourism in China reflects the major changes in recent decades in the country’s economy, society, politics and governance. There has been a gradual but substantial transformation from a centrally planned economy to a more market-oriented economy “with Chinese characteristics” (Sofield & Li, 2011).  There are continuities as well as changes in this gradualist transformation. China’s long-standing tradition of commerce and entrepreneurialism, for example, has re-emerged, following its suppression. This is one influential factor in the dramatic expansion of domestic tourism.  Chinese society continues to value social order and harmony, and often also believes in the subordination of individual desires to the greater whole (Sofield & Li, 2011, p.506).

In terms of governance, there has been the retention but also the evolution of a strong state sector, which continues to be led by the Chinese Communist Party. Despite an absence of any significant shift to western forms of democratic governance within this one-party state, there has been some greater tolerance of dissenting voices. Sofield and Li (1998, p.364) suggest that, in China, the approach to heritage “has tended to be carefully controlled by the state; and its use for tourism has often been driven by ideological tenets of politics (in this case, socialism as defined by the Chinese government)”. Thus, at times, the state has sought to use cultural heritage to disseminate messages and values which are supportive of the Chinese Communist Party (Henderson, 2002; Yan & Bramwell, 2008).

Interpreting urban heritage tourism in China is different from other Western perspectives. Western tourists often seek a way of understanding knowledge and truth, while Chinese tourists often put the emphasis on imaginative memories and cultural values. A Chinese interpretation is very important to understanding Chinese heritage at tourist sites, as it is tied up with spiritual experiences deriving from China’s 4000 years or so of history. In Chinese history, emperors established different dynasties, and many historic resources depict “emperor-gods and animistic spirits” within “mountains, rivers, lakes, and other natural features” (Sofield & Li, 1998, p. 366). In addition to these imaginative messages and poetic contexts, broad Chinese contextual factors such as the history of wars, population migrations, dynasty change, and social changes, have affected the development of heritage tourism and have created different interpretations in China.

My research has been conducted in Nanjing, a city with a population of over 8 million in 2011 and which was historically prominent as the national capital at various times during the Six Dynasties (220-589), Ming Dynasty (1368-1644), and Republic of China (1919-1949) periods (Nanjing Tourism Bureau, 2010).  Nanjing’s legacy of major cultural heritage resources has led to it becoming a major tourist city, attracting 79 million domestic tourists in 2012. According to the Nanjing Statistics Department, the city’s tourism industry revenues in 2009 was 82 billion CNY, representing 19.7% of Nanjing’s GDP (Nanjing Tourism Bureau, 2010). Information on Nanjing’s heritage tourism was collected in February–April 2011 and May–June 2012, including semi-structured interviews, observations, policies, plans, annual reports, newspapers, and photographs, together with official websites and Weibo.

Fig 1: Pictures on exhibition at the Nanjing Massacre Memorial Hall

There are particular interpretative issues at Nanjing’s Memorial Hall of the Victims in the Nanjing Massacre, a site which explains how Japanese troops killed 300,000 unarmed Chinese soldiers and civilians during the second Sino-Japanese War (1936-1945). Since 2014 February, Nanjing city government decided to set up December 13 as National Memorial Day to commemorate the deaths during the Nanjing Massacre.

The Nanjing Massacre Memorial Hall had an official role for the Chinese state in promoting patriotic education. While visiting the Memorial Hall in 2004, the Chinese Communist Party General Secretary asserted, “Here is a good place to carry out the education of patriotism. Never forget to educate the adolescents on patriotism at any time” (Zhu 2007, p.62). It has been suggested that the nationalism promoted at such sites can provide a cohesive ruling strategy and that this can help legitimize the Chinese Communist Party’s position (Coble, 2007; He, 2007; Seo, 2008). Some innovative media was used at the Memorial Hall to encourage tourist empathy, including sculpture groups at its entrance. Another exhibit involves drops of water falling, and a light next to the photograph of a victim which turns on and then off every twelve seconds.

The Memorial Hall’s interpretations emphasise that China’s former national weakness provides us with historical lessons for today, as reflected in the Nanjing Massacre.  A Nanjing Tourism Bureau official suggested that, at this attraction, “The historical past memory may always record and present sad or negative information […] and at the same time help us to consider our further social development”.  In the Memorial Hall, a high wall displays the motto: “Past experience, if not forgotten, can serve as a guide for the future”.

The Nanjing Massacre is a notorious incident in China’s collective memory, and this encourages many domestic tourists to visit the Memorial Hall. The tourists who were interviewed generally had been prompted to reflect on the horrors experienced by the massacre’s victims. One tourist interviewed at the Memorial Hall described how, “My boy asked me about that, why unarmed Chinese people were killed by the Japanese? I suggested that he should forgive the Japanese…and Chinese people should become stronger, so that their country cannot be invaded by other foreigners”.  Another tourist took away the message that, “Backwardness leaves you vulnerable to being attacked. In the past, we had this miserable history of the Nanjing Massacre […] Our Chinese people should become stronger so that no one can invade us any more”.  More generally, Zhao (2004, pp.232-3) argues that recent nationalist rhetoric in China involved people being “asked to bear in mind that weakness, disunity, and disorder at home would invite foreign aggression and result in loss of Chinese identity, as China’s century-long humiliation and suffering before 1949 demonstrated”.

Fig 3: An exhibition of skeletons

Yet there could also be tensions between the Memorial Hall’s interpreted messages and the tourist reactions. A Nanjing Tourism Bureau planner suggested, for example, that there were limits to what the site’s patriotic education could achieve: “The Chinese government encourages patriotic education to increase Chinese people’s national pride and sense of national identity. However, it does not actually work very well. People may be more open-minded now than they were many years ago. Thus, they may not fully accept this patriotic education”.

Another tourism official considered that tourists were increasingly questioning what was presented. He argued that: “The government probably cannot easily affect people’s values, especially when the Internet is widely used in everyone’s lives. People can search for any information online and they become more open-minded. Therefore, they can think critically about the messages which the Chinese government has promoted at different patriotic attractions”.

Indeed, one tourist stated, “I know that some of Nanjing’s tourism attractions are patriotic education places. However, the reason for visiting those places is their history and culture, and not for the patriotic education on offer”.  Other tourists commented, “I do not like the patriotic education at some tourist sites. It looks like a brainwashing activity”, and “Patriotic education might have been useful fifty or sixty years ago, but not for now. I do not think that it is very useful for the future either”. Such responses support Ashworth’s suggestion that the acceptability of tourist products and their associated messages is likely to depend on whether they are “incorporated into the existing experience, expectations and historical understanding of the visitor” (1994, p. 25).

The research here only identifies the importance of interpreting urban heritage tourism and relevant issues in the case of the Nanjing Massacre Memorial Hall. Influenced by the governance system, the Chinese government seeks to interpret the political purposes very substantially at historic sites, sometimes in the belief that some historic messages are beneficial in uniting people and establishing national identity. Meanwhile, a few tensions also raised in terms of China’s rapid economic and socio-cultural urban dynamics exist in most cities, including Nanjing. The discussion can be opened up to other policy makers, industrial operators and academics who are interested in cultural heritage, urban planning and tourism development.

Ashworth, G. (1994). From history to heritage – from heritage to identity. In search of concepts and models. In G. Ashworth & P. Larkham (Eds.), Building a new heritage. Tourism, culture and identity in the new Europe (pp. 13-30).  London: Routledge.