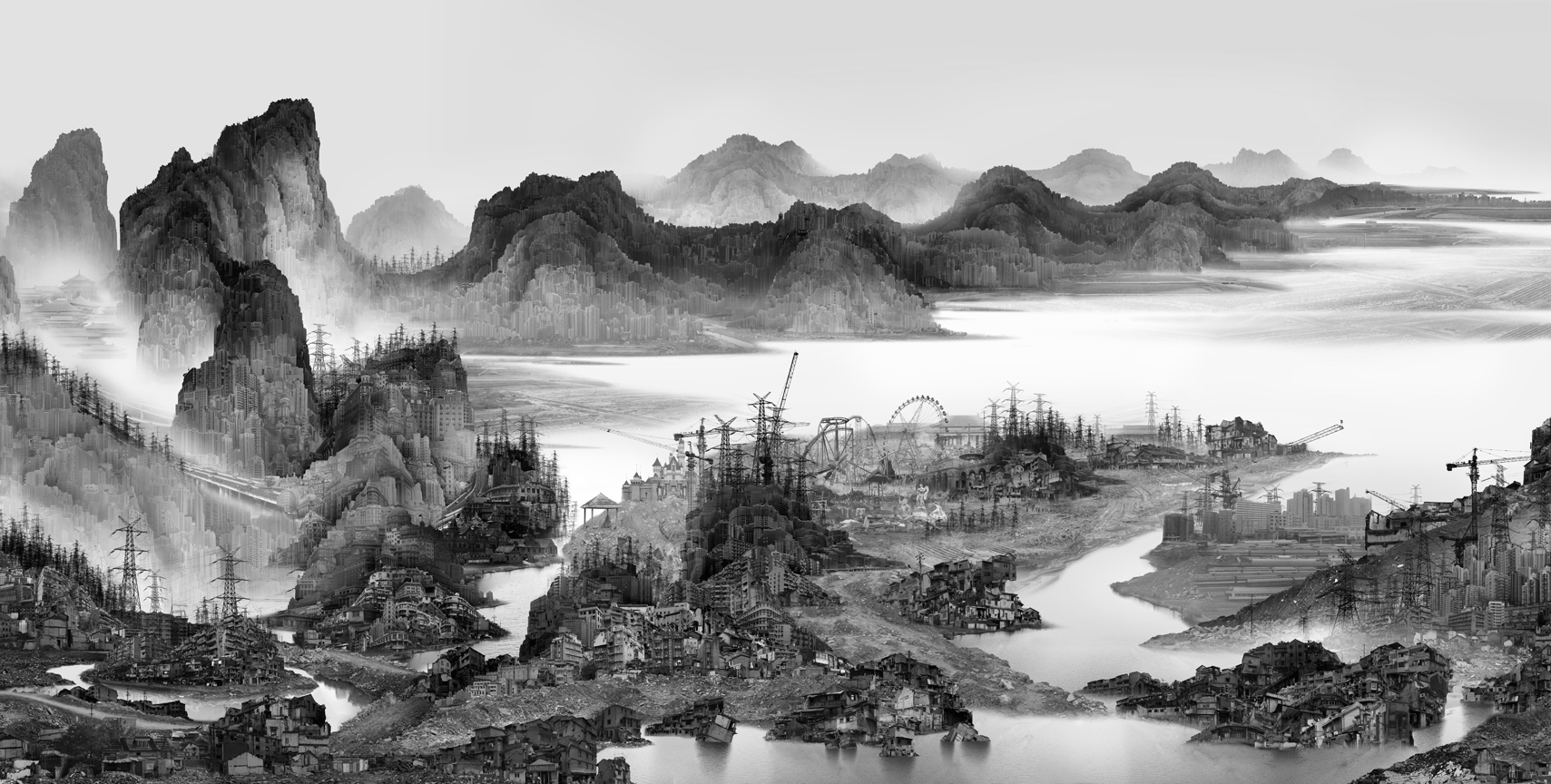 Along with its apparent prosperity and great wealth, China’s top-down and profit-driven urbanization has provoked ever intensive and perplexing social changes and environmental degradation. In response, a growing number of critically-minded Chinese artists have investigated the downsides of this process in art making. Shanghai artist Yang Yongliang is such an artist who examines the sweeping geographical and physical reconfigurations of Chinese cities and their destructive consequences. Since 2006, he has created several conceptual photographic series and video works which reveal a unique personal style through which he visually engages with various problems brought about by mainstream urbanism. These works include Phantom Landscape, Heavenly City, The Peach Blossom Colony, Artificial Wonderland, and The Day of Perpetual Night.

Yang’s work Artificial Wonderland 1 (Fig. 1) exemplifies his perception of the rampant urban development in China. This large digital photograph looks like a reproduction of a typical Chinese landscape painting of the Song dynasty, with its broad vista, overlapping mountain ranges and misty atmosphere, and the opulent presence of rivers and lakes. Upon close observation, however, one might be greatly surprised and even shocked. The beauty of nature, a topic rhapsodized about in Chinese paintings and literature throughout the ages, is achieved by the artist’s careful piecing together of numerous photographed images of the cityscape that he took with his digital camera in and around Shanghai.

What seem to be mountain ranges and hills, trees and plants, boulders and foliage, and pathways, are actually formed by various urban structures such as skyscrapers, elevated highways, voltage lines, electrical towers and poles, and construction cranes. Through his painstaking arrangement of countless urban structures and motifs, Yang has constructed an artificial landscape, a megalopolis disguised as natural landscape, with a wide range of details that can be readily associated with the consequences of China’s consumerist urbanization.

In the foreground, by the shores and in the water, what seem to be villages, boats, and greenswards are actually construction sites, collapsing buildings, and rubble-covered ground, speaking to the endless construction and demolition. Behind all this at the center of the composition, there emerges an amusement park whose giant Ferris wheel and roller coasters hint at the hedonism of contemporary urban culture (Fig. 2).

This section is full of ambiguous details, and the amusement park exists in a complex architectural environment. In front of it are ruins of ancient Greek structures with remaining stone sculptures standing over a field of debris. An edifice of Roman style is to the right of the park, and behind it emerges a number of Chinese palatial buildings. To the left and in front of it is a forest of electric towers over a group of overlapping high-rises. Further left and behind those is a cluster of European-style villas, and next to that is an empty thatch-roofed pavilion. The ground that supports all these structures is a mix of earthy land, heaps of concrete rubble, and trash dumps. This is a space where old and new, Eastern and Western, fictional and real randomly co-exist without any inner logic. History and time do not make sense in this zone, which very much reflects how urban development unfolds in China. In the rush to urbanize and prompt GDP growth, the history of a place seems to bear minimal value in the mind of decision-makers. And ironically, when authentic historical sites are demolished, new structures in vulgar and fragmented pseudo-antique styles (Chinese and European) are often established.

This work and those others mentioned above are informed by Yang’s first-hand experience of the disruptive process of Shanghai’s urban expansion. Yang was born in the historical county of Jiading, near the old Shanghai city and renowned for its beautiful scenery, historic cultural sites, and residential quarters and streets built in the characteristic southern architectural style. In the early 1990s, Shanghai began rapid economic development and found itself in need of more land to fuel its economy. Its solution was to expand its urban territory by annexing its neighboring rural counties, including Jiading.

For Yang, that was when the destruction of his historical county began. As the speculative and commercialized urban development took hold of the ancient country (renamed ‘Jiading district’), a lot of historical sites were torn down and the beautiful landscape was destroyed to make way for industrial complexes, commercial districts, and apartment compounds. Many of these new urban structures, oddly, are made to resemble the style of the authentic traditional buildings that were demolished. Having traveled to other cities across China, Yang sees similar phenomena everywhere and laments: “A country that carries a long civilization and is full of traces of history shall have been replaced by a new, soulless kingdom which is littered with concrete cement!”[1]

The work clearly expresses Yang’s critical assessment of the mode of development Shanghai and China as a whole is taking. Numerous buildings of similar architectural style populate the foreground of the composition. Other than obvious ruins, it is often unclear whether the standing structures are being spared from demolition, or if they are in the middle of collapsing and will be reduced to rubble. This is a state of transition between construction and demolition, a condition that has actually become perpetual in China’s nonstop urban renewal and expansion. The ambiguity and uncertainty here reflect the artist’s response to an observed reality and reveal a certain level of psychological truth. The distant skyscrapers are piled up in a congested and precarious way so that the whole situation looks horrendous, especially when one considers that these structures are where human beings live. This photographic image bears the atmosphere of an apocalyptic prediction: the once tranquil and pristine nature has been entirely abolished with the invasion and infiltration of the urban world. It might well be seen as an urban dystopia.

In Yang’s meticulously simulated image of the traditional landscape painting, however, there is one important element missing: the human figure. This intentional omission might serve as a pointed comment on the anti-humanistic nature of recent urban development in Shanghai, which bears typical features of overall Chinese urban transformation. As many scholars point out, the development is predominantly driven by the desire to accelerate economic growth, maximize financial profit and political prestige, and enhance the competitiveness of the city to attract foreign investment and international tourism.[2] In the drive to create a global city, the everyday life of ordinary local residents is ignored by the grand scheme of social progress designed by a few political and economic elites.

Therefore, the human-less urban environment portrayed in Yang’s work is essentially an alienated one. The tightly overlapped skyscrapers appear threatening and fundamentally unsuitable for organic life, while the collapsing structures and rubble-covered ground look like a scene after an epic disaster (Fig. 3). Either as a comment on the increasingly estranged contemporary lifestyle or a critique of the problems embedded in Chinese urban development, or both, this work can be seen as an honest and poignant representation of the conflicting and distressing urban space that Yang sees himself living in. The magnificence of Shanghai’s newly built urban environment renders the destruction of heritage and communities, and the distress inflicted upon its inhabitants, invisible, much like the beautiful and orderly surface of the photograph which conceals such disturbing and chaotic content.

Meiqin Wang is Associate Professor of Art History at California State University Northridge. Her research focus is on the recent developments of contemporary art from China and their social, political, economic, and institutional implications in the context of the commercialization, urbanization and globalization of the Chinese world. Recently, she has begun working on socially engaged Chinese art, including rural reconstruction through art, social activism through art, and community building through art. A longer reading of Yang Yongliang’s work can be found in chapter 4 of her recent book Urbanization and Contemporary Chinese Art (Routledge, 2016). Image credit: Image: Yang Yongliang, courtesy of the artist.

Does China manipulate its currency as Donald Trump claims?
Chinese Paw-litics, Anyone?