Xi’s Anti-corruption campaign: Echoes from the past 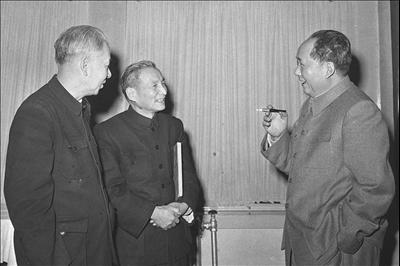 Over the past several years, a number of commentators have drawn parallels between Xi Jinping’s three-year-old anti-corruption crackdown and Mao Zedong’s Cultural Revolution. On one level, such an analogy seems absurd. Whereas Xi’s crackdown may stoke fear through the party ranks and made official reluctant to act, the Cultural Revolution engulfed society, plunged China into protracted political turmoil that killed upwards of a million, sent tens of millions into internal exile, and severely disrupted the economy. Three and a half years into Xi’s crackdown China is not in chaos and, while growth rates are down, the economy is still growing. But there is an element of truth in this analogy. Like Mao’s Cultural Revolution, Xi’s crackdown seeks to cleanse the official ranks and reassert hierarchical control over the party-state. But Xi’s tactics are clearly not those of the Cultural Revolution.

In the spring of 1966, convinced that the party was becoming politically bankrupt and “revisionist,” Mao called for a “cultural revolution.” He quickly brushed aside Liu Shaoqi’s attempt to control this revolution by deploying work teams composed of cadres to guide and direct it. Freed from the controlling hand of the party establishment, students attacked, humiliated, imprisoned, beat, and even killed school administrators and teachers. They poured off campus in a frenzied attack on the “four olds.” They searched homes; hauled individuals off for questioning; and staged mass struggle sessions in which they denounced, tortured, and in some cases executed the “hidden counterrevolutionaries” exposed by their searches. In 1967, the “Red Guards” seized the “bourgeois headquarters” occupied by politically degenerate and corrupt party cadres. They then fell to fighting amongst themselves for power. Split into hostile factions, competing members leadership manipulated the Red Guards as they fought each other. The result was not a reassertion of Mao’s ideological dominance. On the contrary, he lost control as the chaos mounted and ultimately had to turn to the army to resort order.

Xi’s approach to cleaning the party differs considerably from Mao’s. First, although the crackdown on corruption may have enabled Xi to eliminate some of his purported political enemies and has been wrapped in propaganda that stresses the frugality and uprightness associated with the “golden days of socialism,” the focus of the crackdown is ultimately to attack corruption defined as the usurpation of cadres’ and officials’ delegated authority for personal gain or advantage. Thus, unlike Mao’s hunt for ideological deviants, Xi has targeted those who have violated the law. The fact that his political enemies have committed a criminal act is, obviously, quite convenient.

Second, whereas Mao used the masses to attack the party, Xi has relied on the party and judiciary institutions. He has designated Wang Qishan and the Central Discipline Inspection Commission (CDIC), which has sweeping investigatory powers including the ability to detain suspects indefinitely, as the primary attack dog. Once accused of corruption, an individual clearly faces a tough uphill battle. Although they might somehow convince CDIC investigators they are innocent, most apparently face relentless pressure to confess. If they do confess or investigators find sufficient evidence of guilt, they are handed over to the Procuratorate for a criminal investigation and possible court trial. Trials are swift and sentences are often harsh. Even so, the process follows the “rules” as laid down in party statutes and criminal law. Thus, in contrast to the Cultural Revolution where guilt and innocence were determined in an opaque and arbitrary manner, Xi’s campaign has been conducted within China’s formal organization structures. Evidentiary standards may be questionable, confessions may be forced, and trial procedures stacked against defendants, but unlike the Cultural Revolution, Xi’s crackdown at least tries to conform to the formal rules, laws, and process of judicial process.

Third, whereas Mao unleashed the “bottom” (the revolutionary “masses”) against the “top” (the party and state establishment), Xi has not mobilized the masses. He has actually sought to demobilize the masses. Although commonly referred to as a “campaign,” Xi’s crackdown is not a “mass campaign” (群众运动). In a Maoist mass movement, the masses play an active role, but it is a secondary role. In the mass campaigns of the 1950s, the party deployed “work teams” to units and localities. After conducting investigations, the work teams selected the targets. They then organized the masses to “struggle” against the accused. During these struggle sessions, the masses were encouraged to denounce and even assault the accused. But the masses are ultimately supporting actors and it was the party’s work team that directed the drama.

By contrast, to the extent that the public interacts with Xi’s campaign, they do so through the official media and are relegated to the role of a passive audience. Early in the campaign, netizens did seek a more active whistleblower role. Activists culled public records seeking to identify officials who owned multiple properties. They posted pictures of officials sporting luxury watches and videos of officials with prostitutes. Jilted mistresses posted denunciations. Rather than encourage netizens to help expose corruption, the regime clamped down. In September 2013, the judiciary issued a new ruling that stipulated that individual who spread “rumors” on the internet and through social media could face up to three years in prison. Thus, they made it clear that the crackdown was strictly an internal cleansing of officialdom. The regime has vigorously publicized the crackdown and its determination to wage a “life and death battle” against corruption. Ultimately, while the party may be conducting an internal tiger hunt, it nails the fallen tigers pelts to a media wall for the passive public audience to view.

In conclusion, whereas Mao’s Cultural Revolution was an unguided, bottom-up assault on what the Chairman saw as political degenerates within the party, Xi’s anti-corruption campaign has been a tightly controlled, top-down attack on those who have violated party statutes and laws to seek personal enrichment. The Cultural Revolution and Xi’s crackdown are thus both purges in the sense that they have sought to cleanse the party, but they have employed radically different tactics. Finally, although Xi may have taken out some political rivals, the evidence seems to suggest that he is not hunting imaginary witches; the big tigers and dirty generals charged with corruption seem to actually be guilty. Xi is thus attacking a major political problem, not tilting at ideological windmills as Mao was during the Cultural Revolution. And if some of Xi’s rhetoric may harken back to that of the Maoist era, it harkens back to the “pure” revolutionary ideals of Yan’an and the early 1950s, not the fanaticism of Mao’s Cultural Revolution.

Andrew Wedeman is a Professor of Political Science at Georgia State University, where he heads up the China Studies Initiative.