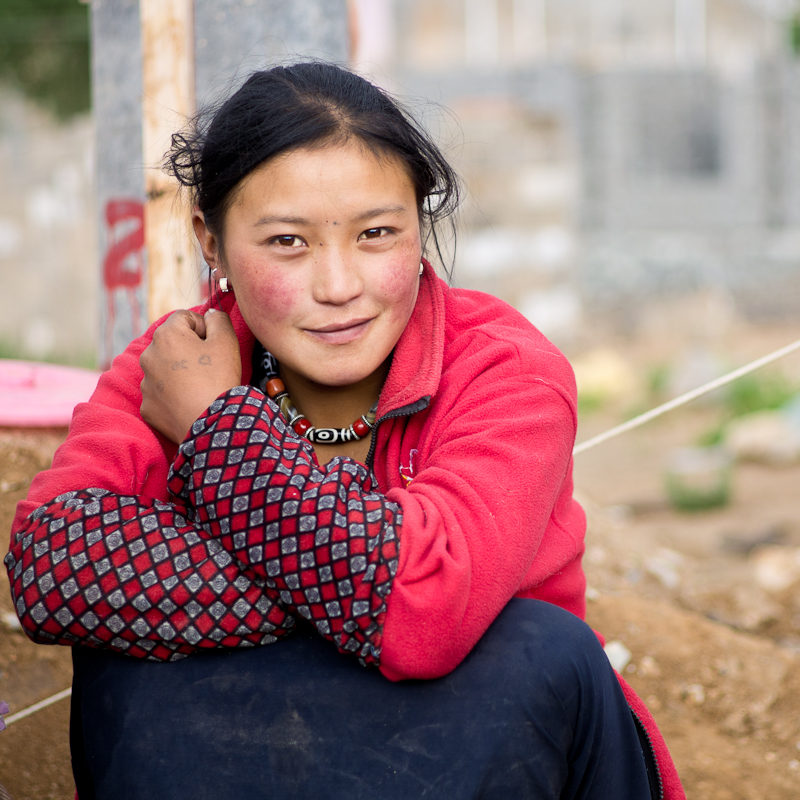 The northeastern area of Qinghai province is home to many ‘Tibetan autonomous’ counties and prefectures, with unique ritual practices, local languages rarely understood elsewhere in China, and a host of locally specific cultural traditions. Like the rest of China, this region has been heavily affected by rapid urbanisation and economic development, with particular impacts on Tibetan women’s social standing. Recent state discourses are reflected in the accounts of many Tibetan women and men I have interviewed, who assert that when Tibetans become educated, familiar with urban life, and interact more often with ‘modern’ groups and nationalities, the value and esteem they extend to women also increases. It is true that some visible improvements in women’s standing have been seen in modern times, not least because girls’ education has increased, while quotas have helped some women attain relatively high government positions. However, as with any major shift in social organisation and economics, the effects of urbanisation have not been all positive and the reality is more of a mixed bag.

Livelihoods were once based on a near-subsistence mode of living, with families living off the products of their labour in farming and animal husbandry. But this basis of livelihood has shifted with economic development and urbanisation, as subsistence production has been supplanted by an economy that is more market-oriented, with more of the necessities of life bought with cash rather than made by hand. One Tibetan woman I interviewed said, “Before, one item of clothing and one pair of shoes to wear in both winter and summer was fine, but not anymore.” Now, social respectability requires the possession of more material items. Cash income has grown more necessary for a family’s welfare as well. Health care expenses have increased, and schooling of children has grown more important in a modernised and Sinicised economy in which language skills, literacy, and official diplomas have grown in necessity. Families deal with these pressures by engaging in seasonal labour for pay, by providing labour on construction sites, for example, and by digging for the lucrative medicinal herb known as caterpillar fungus, or in renting out their land to fungus diggers. Women’s traditional confinement to labour based in and around the home is often behind pervasive notions that women lack competence in tasks such as facilitating negotiations between community members, professional work, and making household decisions. In current times, however, women are leaving home to engage in seasonal labour for pay along with men. In some cases, it is women who are even more likely than men to leave home to earn this type of income. This means that one of the main rationales behind beliefs that women are incompetent can less easily hold in a more urbanised and marketised economy. As the economic environment has become more competitive, husbands need to cooperate more with wives to find income-earning opportunities and make the cash income that has grown in importance in modern times. This appears to have led to women’s increased participation in household decision-making.

But urbanisation and more education for women can also cause new tensions or new spaces where old restrictions are re-asserted. According to Tibetans I interacted with, a woman who drinks alcohol and frequently goes out at night is considered to be a ‘demon’. Professional opportunities, though available to women, can be restricted by husbands or can cause marital tensions. I spoke with a number of people involved in promoting Tibetan women’s writing and publishing, and I was told that it is common for young women’s literary production to decline once they get married. Women also reduce their attendance at literary conferences once married, or are blocked from attendance by husbands. In fact, I was told that married women who do attend these conferences are careful about what they say in their presentations, and do not feel they can speak as freely as they did when single, because they must worry about how their husbands will react to their statements. Even though women are enjoying new opportunities, then, norms by which women are expected to prioritise family responsibilities and which frown upon women who act with the freedom that men enjoy restricts women’s freedom to socialise, engage in voluntary professional development activities, and be mobile.

I spoke with one female university professor who said that when her female students are successful or confident enough to vocally assert their opinions, they are ridiculed by male classmates. These male classmates tell their outspoken female classmates, i.e. women “who have capability and are able to speak [well]”, that they will not be able to get a boyfriend or get married. When women are good at arguing and show their skills openly, this goes against norms of relative silence for women, and the notion that men should be superior to their wives in achievement, income, etc. Women are therefore left under a difficult double-bind, in which education and professional income can increase women’s status and respectability, but they are also supposed to stay marriageable, demure, and not ‘too’ outspoken.

Urbanisation can have particular impacts on gender-based violence as well. Evan Stark argues fear of violence outside the home is one reason women in the United States stay in abusive marriages. Similarly, when speaking with Tibetans, I encountered the case of a woman who chose to remain with an abusive partner in part because of fear of being harassed by men if single. As stated by a Tibetan woman who posted anonymously online about an abusive ex-boyfriend, “I figured staying with him was better than being with other men I knew, and if I didn’t have any boyfriend, lots of men would harass me for sex”. A Tibetan woman activist who campaigns for women’s rights and gender-based violence awareness has likewise stated, “Too frequently, Tibetan women are…harassed for sex”.

Harassment marked by visiting a woman’s house at night and propositioning her for sex is a common practice among Tibetans. It requires, however, being acquainted with the woman in question, knowing her circumstances – such as whether she is in a relationship and whether she has a father or husband or boyfriend living with her, and close proximity of residence. For residential proximity, men usually reside in the same small town, village, or school campus as the women they are propositioning. With urbanisation and its accompanying atomisation of lifestyles, with bigger and bigger cities, people are less likely to know their neighbours, or to know their neighbours’ life circumstances, and this is likely to cause a decline in this type of harassment. This by no means decreases the possibility of other types of rape or violence against women, however. In fact, the proliferation of brothels, pornography, and commodification of women’s bodies that accompanies urbanisation, the spread of the internet, and advertising can strengthen notions of male entitlement to women’s bodies, with knock-on effects on violence against women.

Moreover, Sinicisation of social norms in Tibetan communities appears to have accompanied increases in population, and increasing numbers of Han, within urban centres. This seems to have caused an increasing focus on chastity, on the need for women to remain sexually pure in order to be respectable and marriageable. This trend is therefore bringing new social pressures and restrictions to women.

Feminist scholars have cast doubt on popular notions that urbanisation unilaterally increases prosperity and improves gender equality.[1] Likewise, in this region, there is reason to doubt the claims of those who assert urban life improves women’s status in every way. As in the rest of China, the pace of change continues to march forward, with both positive and negative effects on individuals’ prospects.

Hamsa Rajan is a doctoral candidate in the Department of Social Policy and Intervention, University of Oxford. She tweets at @rooftopsun. Image credit: CC by kevinschoenmakers/flickr.

Beyond City as Spectacle: Branding and Everyday Life in Urban China
The end of China-Taiwan rapprochement tourism