What You Don’t See Doesn’t Exist: The edible dog in China 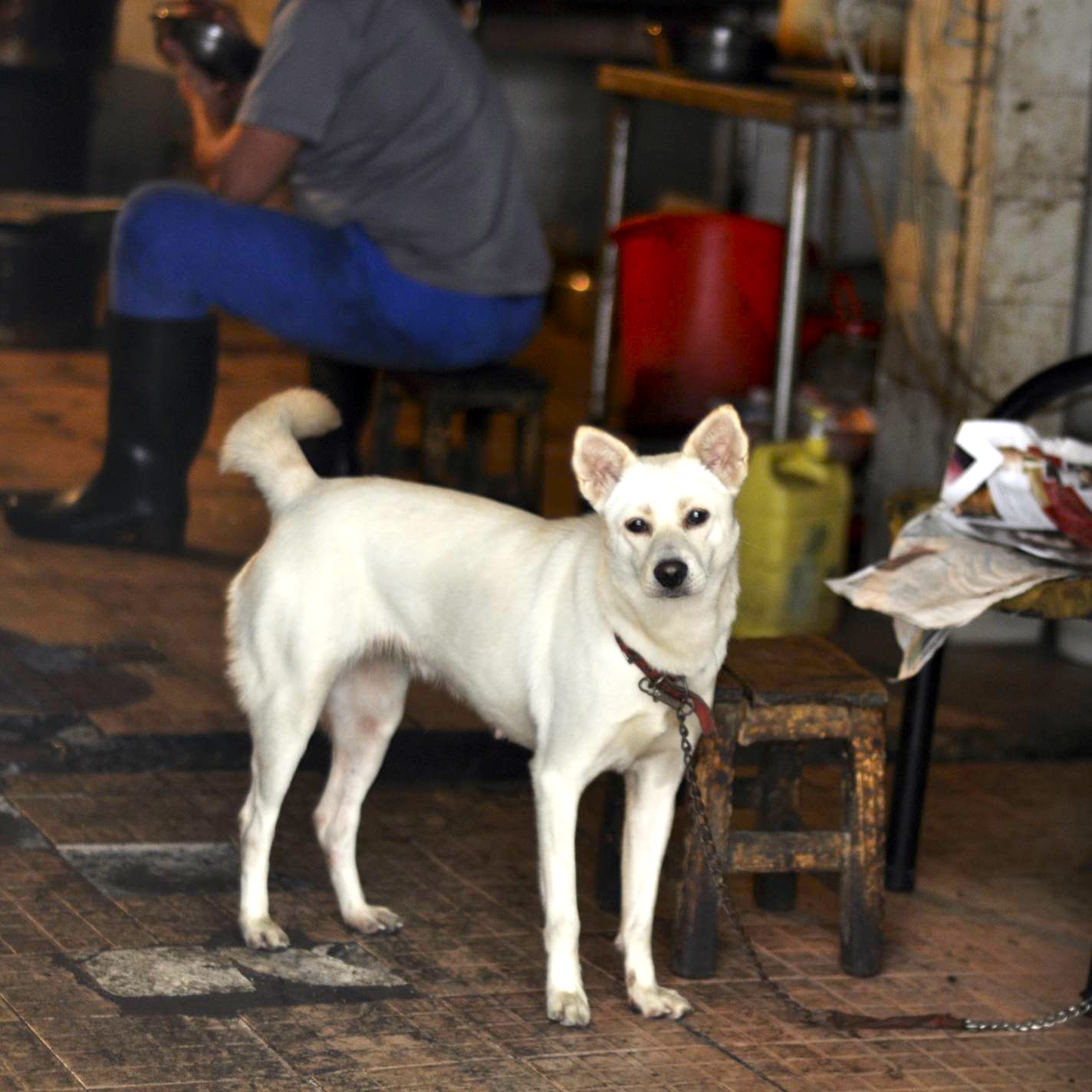 I was happy to read recently on the MCLC LIST a text on animals and China. Haiyan Lee’s text “Chinese Paw-litics, anyone?” emboldened me to write this response. As I’m presently doing research on dogs and China, I thought I’d share some of my thoughts on the dog eating business in China today. While critical attention, in and outside China, is turning a horrified gaze on the annual Yulin Lychee and Dog Meat Festival, I would like to gain some perspective by looking back to the Han dynasty, a time when human-dog relations were viewed as complex, and the status of the dog was high.

Inhumane slaughtering techniques and dog flesh recipes have existed throughout China’s long history. The difference is that, toward the end of the Han dynasty, dog ceased to be a prized meat, and the business itself — the butchering and selling — was relegated to the wretched of the earth. Blame the poor. Or blame Buddhism, which prohibited the consumption of the flesh of animals working with humans. By the Eastern Han dynasty, dog meat was three times cheaper than a pig’s and barely more expensive than chicken or rabbit.[1] By the Tang dynasty, dog meat was consumed in fixed seasons for its purported health giving qualities.[2] Here of course we are speaking of the habits of full-fledged citizens. The peasants, the poor, the outcasts eat dogs; but not those with the means to assume moral superiority.

Liu Bang, the first emperor of the Han dynasty, chose a relative, a dog butcher named Fan Kuai as his right hand man. Fan Kuai invented a recipe that combined turtle and dog in a stew. Liu Bang gave dogmeat its lettres de noblesse. In 2009, this recipe was elevated to the status of “intangible cultural relic” of the province of Jiangsu. A descendant of Fan Kuai, Fan Xiantao started the Pei County Fan Kuai Dog Meat Festival (沛县樊哙狗肉节) in 2007. All meat comes from the family’s own dog meat rearing farm/ factory that people can visit. I imagine you can witness there the practical application of numerous manuals on how to rear dog for meat. One ideal way to produce high quality meat is apparently to mate Saint Bernards with local dogs.

In 2013, the organizing committee of this dog meat festival decided to publicize the event in the subway stations of Shanghai, where you can hop on the no. 2 train line to get to Xuzhou (Pei County). The citizens of the megapolis, along with other urban netizens, were scandalized by the barbaric custom of their peasant neighbours. The festival adopted a more low-key presence, although it continues to be held.

Throughout what was the Han dynasty’s geographical area, dog meat is still eaten, especially in the winter months. This practice is more than acceptable, as long as it’s not publicly displayed. On January 10, 2016, Nanjing local news reported the gruesome scene of a 60-year old man skinning alive a dog on Dachang street, in the Luhe district. It took some ten minutes to complete the slaughter while a crowd, which included children, watched. The event was newsworthy, not because a dog was being killed, nor because of the way it was killed, but because it was done in public, and by a peddler who did not have the requisite health or quarantine certificates. The short article ended with a caution to buy your meat in a respectable place.[3]

The Yulin Festival represents the “Southern” way of eating dog. Yulin, province of Guangxi close to Guangdong, has seen better days, notably during the Han dynasty. Today’s residents are neither rich nor cosmopolitan. They never imagined that publicizing their dog eating festival nationally would create such a stir. News of the event caused reactions even in the West.

During the Han dynasty, Yulin was part of the Nanyue kingdom, which was semi-sinicized. This means that power was concentrated in the hands of Han people from the North who adopted the Han dynasty system, while the native inhabitants lived, as Michael Loewe writes, “naked, with no compunction, and they had yet to learn of the habit of paring off in orderly forms of marriage.”[4]

The South, or what Chinese today refer to as Lingnan (Jiangxi, Hunan, Guangdong, Guangxi, and Hainan as well as northern Vietnam), has always been afflicted by sultry weather and miasma diseases (瘴气) in the summer. Long before the Han dynasty, the locals believed that the dog could ward off (避邪) evil and pestilence. The hundreds of stone dogs unearthed at crossroads, by the sea, at the foot of mountains throughout the Leizhou peninsula of Guangzhou attest to this belief dating back to the Spring and Autumn period (771-476).[5]

Hence the ideal time for sacrificing/killing dogs, and consuming its flesh, was the summer solstice — 夏至 pronounced in Cantonese ‘haa6 zi3’) when the Western winds brought on the ‘poisonous gases’. Closer to present times, in the 1892 edition of the Bazaar Exchange and Mart, and Journal of the Household, a two-page text on the Chinese edible dog mentions the annual A-chee Festival (read 夏至) as the time of year “where canine delicacies are most indulged in”.[6]

Dog flesh in Lingnan is often eaten as a hotpot, accompanied by lychee, the queen fruit of the south, and warmed alcohol. The combination has no proven medical value. Dog stew was a sacrificial viand and a staple during the Han dynasty; so were dog meat hotpots in the South and dog meat kebabs in present-day Gansu.

The killing of dogs continues today, and in the same inhumane ways of the Han dynasty: skinning the dog alive or clubbing it to death, while other dogs wait their turn. Marc Ching who, under the guise of an undercover buyer, has visited many makeshift killing grounds stretching from the Beijing area down to the south, also claims that the peddlers burn dogs alive with blowtorches.[7] I believe him.

The days of dog meat festivals in China are numbered. In 1987, Harriet Ritvo wrote intelligently about the parallels between the lower classes and the animals in Victorian England (The Animal Estate).[8] In 2016, Colin Dayan wrote spiritually about the American lower classes and dogs, in particular about the dog fighters and their pitbulls. Her brilliant book is aptly titled With Dogs at the Edge of Life.[9] The dog-human relationship should not be a question of morality but of ethics. Why is the onus always on the poor?

Claire Huot is Associate Professor of Chinese Studies at the University of Calgary. Her ongoing research is on dogs and Chinese civilization and culture. She published “The Dog-Eared Dictionary: Human-Animal Alliance in Chinese Civilization” in The Journal of Asian Studies in August 2015. The present piece was originally circulated on the MCLC LIST as a response to “China Paw-litics, anyone?” by Haiyan Lee. Image credit: CC by Dominique Archambault/flickr.

[8] Harriet Ritvo, The Animal Estate: The English and Other Creatures in the Victorian Age (Cambridge: Harvard University Press, 1987).

The end of China-Taiwan rapprochement tourism
Britain and China: A One Track Relationship after Brexit