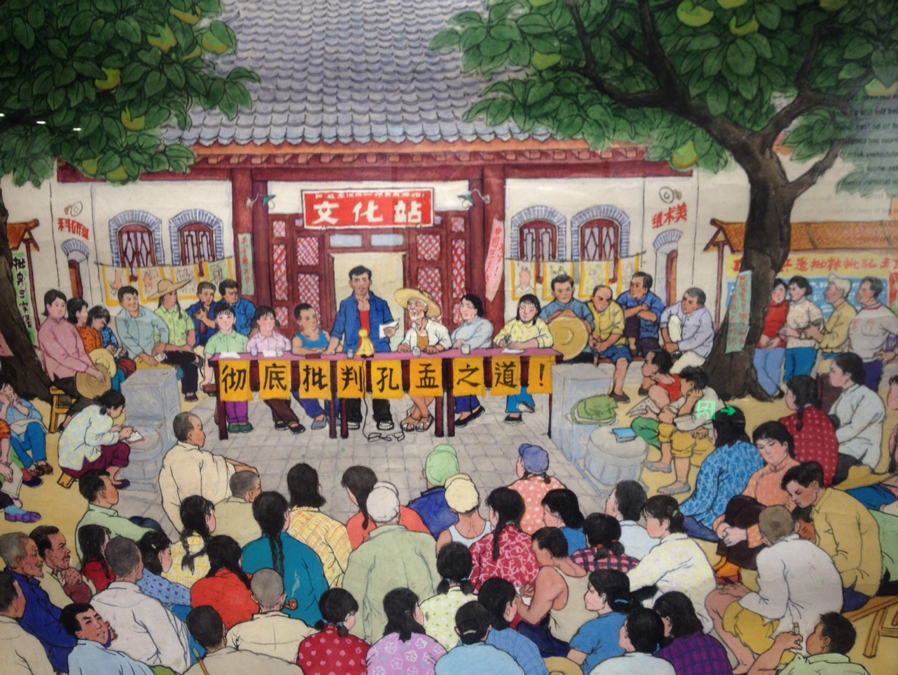 Not long ago, in a coastal Chinese city, I encountered a sight that struck me as remarkable, and perhaps as a subtle marker of social change. Somewhere on the eastern seaboard, I passed by a middle-aged, apparently middle-class person on a boardwalk, in the full light of day, performing what were very clearly the gentle Tai Chi-like exercises of Falun Gong. Not far away, a police officer casually walked his rounds. Neither seemed to take much notice of the other – a situation that, just a few years ago, would have seemed highly unlikely (and just a few years before that, in the full heat of the anti-Falun Gong crackdown, more or less unthinkable).

Though popular religion, along with any form of non-Party sanctioned social movement, ideological discourse, or group affiliation, remain serious sources of paranoia for the Communist Party, what is targeted for repression is often not the mere expression of divergent views, but rather any forms of expression that seem to have the likelihood of sparking mass action and mobilization. Even more than in the pre-Xi era, the Party currently seems able to tolerate anything that seems sufficiently private – like doing one’s exercises alone by the seashore – or even just sufficiently ambiguous that it cannot be read as any kind of call to action.

So whence comes the narrative of “increasing repression” and ideological crackdown that is associated with Xi’s administration? Arguably, this very real phenomenon does not come from increasing ideological strictness or “thought policing” as such, but rather from an expansion of the parameters of what types of behavior or discourse are seen as potentially implying group political mobilization. In many areas of life, such as private religious worship, reading or media consumption, art, and casual social discussion, the system responds with a shrug. Yet increasingly, types of behavior that during the Hu-Wen years were not seen as implying possible “mass action” now are seen as risking just that.

Though there are many examples, among the most important is the ongoing crackdown on “rights-protecting” or wei quan (维权) lawyers, who have challenged the system for years by advocating for human and civil rights protections (or even just basic attention to due process and legal procedural rules) in various different kinds of cases, throughout China. Beyond standing up to Party-controlled judicial panels and representing the interests of petitioners, political dissidents, and minority religious group members, these lawyers also alarmed China’s security apparatus by publicly broadcasting their activities, and in many cases, developing large online followings.

The recent sentencing and subsequent disbarment of Pu Zhiqiang, one of the most active and outspoken of these attorneys, over a handful of Tweet-length online posts was an indication of the Party security regime’s intention to signal the end of its already-limited tolerance for such activities. Of course, even more dramatic and far-reaching was the so-called “’709” crackdown, in which hundreds of rights lawyers and those associated with them were rounded up, questioned, and in many cases then detained. Just recently, wives of some of those still in mysterious circumstances under state custody were themselves detained merely for attempting to ask their husbands’ whereabouts.

The irony is that this tightening of the screws comes at the same time as a much-vaunted Party-led effort to further implement the top-level ideological imperative to “comprehensively govern the nation according to law,” as part of Xi Jinping’s “Four Comprehensives” platform. The related attempt to rid the Party of corruption via Wang Qishan’s much-feared Central Commission for Discipline Inspection, too, has made appeals to justice and the rule of law, as well as to Confucian-cum-old-school-Marxist virtues like “frugality,” “honesty,” and “sincerity.” In a major turn from either the Jiang or Hu administrations, corrupt officials are now portrayed as not just naughty individual cadres, but as themselves a kind of social group who might endanger Party rule. Officially, at any rate, they no longer have a place in the system. The Xi Jinping quote on this wall in Kunming proclaims that the anti-corruption campaign must focus on two things: cracking-down “frequently” and “for the long-term.” (Photo: Ryan Mitchell, 2016)

Meanwhile, “rule of law” is also trumpeted with much flourish as part of the twelve “Socialist Core Values” (社会主义核心价值观) which today one finds just about everywhere in China. In bright, reassuring TV advertisements; on billboards and banners; in glossy bronze plaques along the highway; and emblazoned onto walls in neighbourhoods both rich and poor stand the characters for Democracy (民主), Freedom, (自由) Justice (公正), and the Rule of Law (法治). As we can see, private conversations or even public discourse, academic papers, and the like, do not become threatening to the Party merely by advocating one of these “values.” Even TV shows where audiences vote singers up or down can casually talk about how “democratic” they are. There is no contradiction with the Party’s rule or its proclaimed ethos. What’s threatening are any group identities outside of and (even just potentially) opposed to the Party’s dominance over society and the state.

This has always been a feature of the Communist Party’s approach to social management, but its intensity today should be seen as in many ways a reaction against the Cultural Revolution: That was the quintessential period during which groups previously outside, or on the margins, of the Party became a force that “bombarded” and laid waste to many of its institutions and hierarchies. To those inclined to grand philosophies of history (such as but not limited to Marxist theorists), this implied what Hegel called the problem of “the rabble” (Pöbel). What happens when those excluded from a system try to end their exclusion either by breaking in, or simply by breaking it down? From Deng through Xi, China’s leaders have sought various different ways to prevent anything like this from ever occurring again, but their differences are perhaps not as important as their similarities.

All have sought to present a kind of “corporatist” state, in which every individual can be a member of a social group or collective that gives him or her a stable place in society, a sense of belonging, and an intermediary affiliation through which to deal with the authorities. From this perspective, rights-protection lawyers or minority religions are not problematic in their dimension as individual identities, but rather as potential “corpora” or social groups that don’t fit into the current state-society arrangement. This corporatist ideal of an organically-bound social whole, incidentally, is easy to reconcile with many Confucian ideas – an important plus for today’s Party and a clear break from the anti-Confucian ideology of the Cultural Revolution.

Thus it is probably a mistake both to characterize Xi as a hardline Maoist (though he has with some success sought to establish a popular base of support in the masses) and to suggest that today’s forms of repression are directly indebted to the Cultural Revolution. After all, most of the abuses of that period were actually used by the excluded masses to target those in positions of authority, and precisely for “private” sins (reading habits, family background, owning foreign records, use of Confucian language, insisting on the privileges of the traditional social hierarchy… the list goes on). By contrast, as has been the case since Deng, today repression is mostly used by those in authority to ensure that no “public” affiliation can become an avenue for mass activism or popular resistance. The rhetoric of individual rights per se can sometimes even serve the Party’s interest, as it proclaims that it alone can ensure a stable and ever-improving legal system under the conditions of modern China.

These are all reasons why social group-management, rather than adherence to or violation of human rights protections as such (though as in the case of wei quan lawyers, rights advocacy can itself spark group identity formation), may be the space to watch in terms of understanding the Party’s evolving relationship with society. There was a reason, after all, for local cadres to start chopping crosses in Zhejiang Province or to ban veils and beards in some Muslim areas. Even things which are not in themselves “calls to mobilization” can be put into that category by sufficiently paranoid authorities. But such tactics, in themselves, may only serve to reinforce the alternative corporate identities and solidarity of those who feel excluded from the system.

Ryan Mitchell is a Mellon Foundation Humanities Fellow and Ph.D. in Law candidate at Yale, where his research focuses on China, international law, and political and legal theory. All pictures taken by the author.

Europe and China after Brexit
China and the UN Convention Against Corruption: A 10- year appraisal