Queer Filmmaking in the People’s Republic of China

Home /China, LGBTQ/Queer Filmmaking in the People’s Republic of China 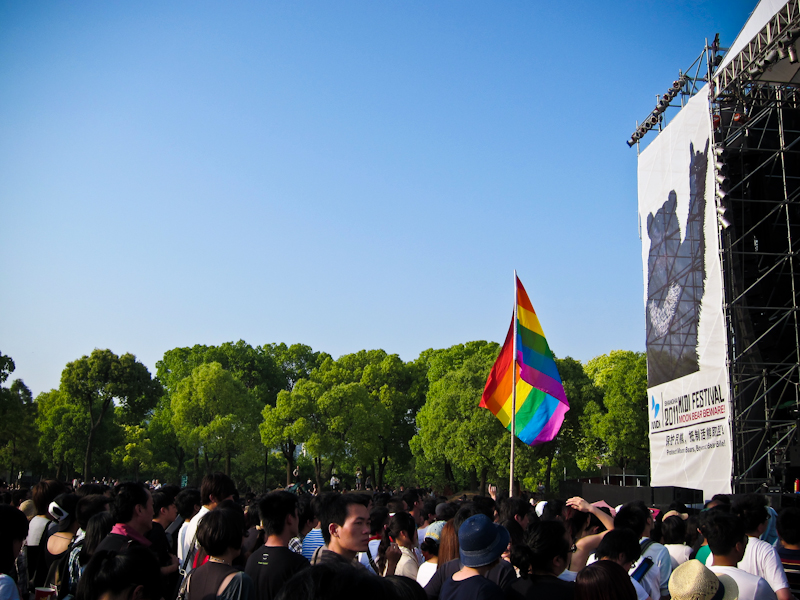 While the Shanghai PRIDE Film Festival was celebrating its second edition from 17th to 26th June, 2016, the ninth edition of the Beijing Queer Film Festival was calling for entries for this year’s programme. Queer film making in the People’s Republic of China has prospered in the past decade, albeit with great precariousness due to China’s specific political and social context. In a country where the pride march is considered politically sensitive and culturally alien; making queer films and organising queer film festivals have become an important form of LGBT (Lesbian, Gay, Bisexual and Transgender) activism contributing to China’s rapidly changing gender and sexual landscape.

Although China has a long history of homoeroticism, the emergence of LGBT identities in their modern sense can only be traced back several decades when China bid farewell to Maoism and started its economic reforms. Together with de-collectivisation and privatisation in the economic sector, a new type of citizenship and personhood was needed for a globally oriented and ‘desiring’ China. The ‘gay’ identity emerged in this historical context; it immediately became, in Lisa Rofel’s words, an ‘allegory of postsocialism’ that signified China’s entry into a ‘brave new world’ of transnational neoliberalism with its alluring promises of liberating ‘true’ and ‘repressed’ genders, sexualities and desires from their repressed past.

Concomitant with early sociologists’ and medical professionals’ efforts to study ‘their world’, some avant-garde filmmakers, often labelled as China’s ‘Sixth Generation’ filmmakers, began to turn their attention to a group of ‘homosexuals’ who were suffering from the repressions of a political system and a heteronormative Confucian familial structure.

The queer-themed films coming out of this time were represented by Zhang Yuan’s 1996 film East Palace, West Palace, Li Yu’s 2001 film Fish and Elephant, and Ying Weiwei’s 2001 documentary The Box, respectively recognised as postsocialist China’s first gay-themed feature film, lesbian-themed feature film, and lesbian-themed documentary Notably, all of these films were made by heterosexual-identified filmmakers in their efforts to draw people’s attention to the neglected and marginalised sexual minorities. These films often feature ‘sad young men’, and women, in Chris Berry’s words, who were trapped in an overwhelmingly powerful and repressive social structure and could not see any hope for a better future.

The emergence of portable and affordable digital video cameras in the late 1990s ushered in China’s ‘New Documentary Movement’ and provided exciting opportunities for a new generation of filmmakers in China to explore new ways of documenting the multiple facets of social realities in a transforming Chinese society. Inspired by the ‘direct cinema’ tradition, these filmmakers often adopt an aesthetic of on-the-spot realism and try to ‘objectivity’ capturing the contingency of social reality, while at the same time distancing themselves from their filmed subjects. Gender and sexual non-conformists in urban bars and clubs, in particular ‘drag queens’, came under the gaze of the digital video cameras. The films that feature transgender themes include: Zhang Yuan’s Miss Jinxing (2000), Michelle Chen’s The Snake Boy (2002), Zhang Hanzi’s Tangtang (2004), Han Tao’s Baobao (2004), Gao Tian’s Meimei (2005), Du Haibin’s Beautiful Men (2005) and Qiu Jiongjiong’s Madame (2009).

There are many reasons why the ‘drag queen’ became the privileged subject in queer representations at this time. Shi-Yan Chao and Luke Robinson identified two important ones: apart from the subjects’ feeling of safety by coming out as a performing artist, the voyeuristic gaze of the heterosexual-identified filmmaker and audience often play a role in representing the ‘other’ as exotic and erotic. I suggest that this type of representation also situates itself in, and along with, the translation and popularisation of some poststructural gender theories, represented by Judith Butler’s notion of ‘gender performativity’, in China’s academic and filmmaking circles. Although the rendering of ‘gender performativity’ into xingbie biaoyan (‘gender performance’) may initially look like an insufficient understanding of poststructural gender and queer scholarship, the process of cultural translation suggests intricate links between Chinese and Western queer activism, and globalised forms of knowledge production.

In 2001, some Beijing-based university students and filmmakers organised China’s first ‘homosexual film festival’, later renamed as ‘Beijing Queer Film Festival’. With the goal of public education and social enlightenment in mind, the organisers chose Peking University as the film festival venue. The forced early closure of the first edition and the complete cancellation of the second edition right before its opening ceremony made the organisers aware of the risks and pressures that they had to face when organising such a politically sensitive public event in China. They changed strategies by incorporating the 3th and 4th edition of the festival into the Songzhuang-based Beijing Independent Film Festival and by positioning queer filmmaking as ‘avant-garde’ and ‘non-political’ artistic expressions. This subsequently raised the question of community engagement: what is the festival for and who are the subjects of queer films? In later editions, the organisers tried to address these questions by striking a balance between community building and public education, often running the risk of forced closure by the police.

Each edition of the Beijing Queer Film Festival features predominantly PRC-produced feature films, documentaries and shorts. It also showcases films from other parts of the Sinophone sphere, Asia and the world. The film festival programme often looks very transnational and cosmopolitan, without losing its cultural specificity and political stance. The festival has adopted a ‘guerrilla’ type of organising strategy, selecting multiple screening venues and designing contingent screening plans: when one screening venue is shut down by the police, the festival can still continue at another venue. In recent years, the festival has experimented with online streaming of films and with on-board screenings on a travelling bus or train. New technologies and changing material conditions have certainly contributed to the development of some context-specific and culturally-sensitive forms of queer activism.

One of the biggest changes in queer filmmaking in the new millennium has been the changing subjects of filmmaking: instead of being represented’ by heterosexual identified filmmakers as the ‘other’, more and more LGBT identified people have picked up digital video cameras themselves to make their own films. A great range of film genres and styles is represented: Cui Zi’en’s early avant-garde queer feature films and his later community documentary Queer China, ‘Comrade’ China; Fan Popo’s queer activist documentaries New Beijing, New Marriage, and Mama Rainbow; Wei Xiaogang’s queer community webcast series Queer Comrades, and Shitou and Mingming’s poetic lesbian feminist film Women 50 Minutes.

Despite their differences, these films are all characterised by the filmmakers’ strong identification with, and deep commitment to, the LGBT identity and community in China. The LGBT NGO, Beijing Gender Health Education Institute, organised ‘Queer University’ which sponsors and trains young people from the community to make LGBT-themed films. Other LGBT NGOs and queer-friendly venues across China, as well as film screening events such as the China Queer Film Festival Tour, help to distribute these independently made films all across China.

Recently, various social forces, including commercial companies and websites, have participated in queer film production and dissemination. From 29 January to 23 February 2016, three episodes of a gay-themed online drama, Addicted (aka Heroin) aired on Chinese streaming websites before it was banned by China’s media administration, SARFT. The complete first season, 15 episodes in all, was soon made available on Youtube. This case demonstrates some of the challenges and opportunities that queer filmmakers face in today’s China: continuing state censorship, strong commercial incentives, popular audience demands, increasingly open social attitudes towards gender and sexual diversity especially among the younger generations, often de-territorialised new media and technologies, as well as multiple, flexible and transnational modes of production, circulation and consumption.

In a country where independent filmmaking and public expressions of homosexuality are considered problematic, the proliferation of queer films and queer film festivals demonstrate a great potential for LGBT culture in China. Films and filmmaking do not have to be political, but in a country where queer representations and sexual rights are limited, queer filmmaking can take on a political edge. Sitting together to watch a queer film becomes an important way of constructing identities and of building communities; organising a queer film screening despite the state ban may have the same political significance as organising a pride march. The 5th Beijing Queer Film Festival organiser Yang identifies the ‘greatest value and ultimate goal’ of holding a queer film festival’ as ‘challenging and opposing this mainstream ideology’ (the 5th Beijing Queer Film Festival programme, ‘Preface’, translation in original). Mathew Baren and Alvin Li, coordinators of the 1st ShanghaiPRIDE Film Festival locate the significance of the queer film festival in the intimate experience of viewing and sharing films:

‘There is no shared experience like sitting in the dark room of a cinema. […] Watching in the darkness, those who gather are not merely an audience, but performers. They reach out and touch, feeling and sharing every fibre of their experience […] [A] film festival demands engagement, collaboration and engagement.’ (ShanghaiPRIDE Film Festival 2015 Programme, p.2, translation in original)

Dr Hongwei Bao is an assistant professor in Media Studies at the University of Nottingham. His research primarily focuses on queer filmmaking and LGBT activism in contemporary China. For more information about this topic, please see “Queer/Tongzhi China: New Perspectives on Research, Activism and Media Culture” (NIAS Press, 2015). Image credit: CC by john/flickr