The End of Fantasy: Framing State TV within Chinese Documentaries 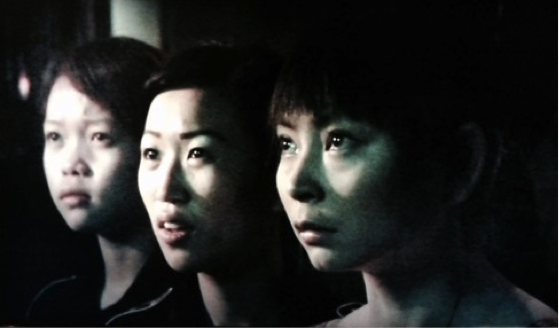 What happens when Chinese filmmakers frame state media footage on television screens within their documentaries today? I’m going to argue that Chinese state media, when represented within contemporary Chinese documentaries, are, in the words of David Foster Wallace, an “agent of great despair and stasis.” It is an argument that perhaps, due to increased transnational connectivity, could be widely applicable to the role television plays in culture today regardless of geographical location, but the argument here is isolated to particular, specific examples. I begin with Lucy.

Lucy is French director Luc Besson’s 2014 sci-fi film shot on location in Taiwan and Europe. It depicts a female protagonist played by Scarlett Johansen who achieves invincibility by unlocking the full potential of the human mind. The science is flawed but the entertainment value is high, especially when Lucy uses telekinesis to defeat her adversaries. As shown in the screen shot below, “Lucy” merely raises her hands to preternaturally disarm and concuss multiple policemen who fall to the floor at her will.

As if to accentuate the validity of this fantastic scene–to reinforce the notion that this is “really happening”–Besson cuts to a shot of the same event as witnessed by closed-circuit television. The blurry, grainy black and white footage screams authenticity because it appears unaltered in an age when Instagram can provide filters in an instant, shows us the scene from an angle we can guess has been planted there by maintenance workers instead of a brilliant director, and it is separate from the film’s texture of reality, demonstrating that CCTV (closed-circuit television) is a supplement to reality rather than reality itself. CCTV is associated here with credibility. No one is fooled, but the card is well played.

Besson’s innocuous film gets us thinking in the right direction as we approach the question that initiates this discussion: what happens when Chinese filmmakers frame state media footage on television screens within their documentaries today? Arguably something more complex and even ominous is at play when state media representations are housed within documentary films such as Li Ning’s 李凝 2010 documentary Tape《胶带》, Wu Wenguang’s 吴文光 memory project “village films” such as My Village《我的村子》(dir. Shao Yuzhen 邵玉珍, 2007) and Trashy Village《垃圾的村子》(dir. Zou Xueping 邹雪平, 2012), and the portrayal of a state news agency capturing news stories in Mouthpiece《喉舌》(dir. Guo Xizhi’s 郭熙志, 2009). Specifically, these documentaries include televisions within, and as part of, their realistic depictions of Chinese contemporary life.

The fact that Chinese documentary filmmakers frame state television within their films is certainly no surprise: Chinese viewers watch 2.5 hours of television a day and some 3000 stations are available nationally. Television is nearly universal, so documentaries of actual Chinese life will inevitably show images of television: flickering in the background or enrapturing television viewers, functioning as symbols of status, and at times just a random part of the mise en scène.

Chinese state television is an institution, and less formally, documentary filmmakers are part of an establishment as well, such as those who studied documentary filmmaking techniques with Wu Wenguang at his Caochangdi Workstation and Living Dance Studio. In general, state media when presented in documentaries is quite formulaic, it provides expected or uncontentious issues, is motivated by state-endorsed expectations, and depicts subjects that maintain state authority and the status quo. These characteristics serve in contrast to independent documentary films that, respectively, demonstrate a seemingly unlimited array of stylistic and interpretive possibilities in terms of film form and film sense, self-motivation on the part of the documentary filmmakers, and present film subjects that might lead to the filmmakers and/or audience to experience a change of consciousness.

Li Ning’s three hour documentary “Tape” performs the contrast between state media strategies and documentary techniques, and the 2008 Beijing games play an integral role. The profilmic events Li depicts include unpredictable public performance stunts, like throwing fake Renminbi bills off of an urban overpass to a flash mob below, and private moments, such as repeated uncomfortable exchanges between Li Ning and his wife regarding their meagre financial status.

It is a performance piece interjected into Tape, one among many, that is relevant within this discussion: Li Ning walks barefoot and alone over the ruins of a demolished hutong, cautiously and even daintily over sideways houses, broken pieces of cement, bent rebar, and shards of glass and metal. The act is accented by the positioning of a TV set, connected to an outlet by a long extension cord, turned on, and playing images of the Olympics until IT (the Event) happens: Li Ning slices open his foot on a sharp object. Blood streams out of the sole of his foot. Spontaneity, the actuality of pain in the present, contrasts with the sugar-coated spectacle presented by the state. Thus, “Tape” presents a dichotomy in this sequence, a gulf between two positions – the destruction of old communities and the idea of a perfect China – that cannot be reconciled without asking a series of important questions: What is the state media covering? Who is controlling it? And for what purpose?

Consider that within the documentary “Mouthpiece”, which presents behind-the-scenes footage of a Shenzhen TV station news-crew looking for stories to present to their audiences, there is a sequence that presents the news crew filming workers protesting a factory under Japanese management. The TV crew at one point states, in effect, that they are “just doing a report, it won’t arouse people’s feelings” as if arousing feelings is to be avoided by state media. But documentaries like Wu’s village documentaries arouse feelings regarding poor state management during the Great Famine (1958-1961) intentionally, while Li Ning’s documentary “Tape” deliberately questions the boundary between spontaneous performance and premeditated state tropes.

Li Ning states, in an online introduction to his film that “it doesn’t follow the conventional story-telling mode of documentary” and that his hope is to “integrate extreme individuality with the public consciousness.” Li Ning strategically edited his film from 6 hours down to the current 3 to be more accessible, yet the final product still feels irregular, at times slipshod (arguably intentionally so), and certainly counter-cultural. The counter-cultural element is found in valuing discovery over reportage, living in the moment, uncovering knowledge. Certainly state documentaries depict unprompted moments as well, but like the Olympics which were presented in a 10 second delay in order to edit out potential protests during live events, unwelcome spontaneous events are edited out of the picture if they do not conform to state mandates.

In contrast, the spontaneity of the documentary form is to enable audiences to learn and discover something on their own. While the television images depicted project the fantasy that the state controls the message in its entirety, the documentary’s credibility is garnered by questioning what it depicts. While the use of staged, fictional CCTV images granted credibility to Besson’s fictional film as described at the beginning of this essay, television footage captured within the “realism” of documentaries subsumes the ideas projected by televisions within the purview of the documentary film construct, rendering the television and its projections yet another cultural object that the documentary studies, questions, and evaluates in order for audiences to gain a new perspective. In fact, in questions and answer questions, I have noticed that Wu Wenguang appears relatively unconcerned about the nature of audience interpretation of his films, but would rather that audiences come to their conclusions regarding his documentaries. The contrast is between active fact-finding and passive ideological transmission.

However, it would be an oversimplification to conclude that the documentary is “real” and that state television is “unreal” – for the documentary is a work of art that is in and of itself what I would label “a new incomplete memory” of the events depicted, whether current or historical. It is not enough to simply decry the façade of state media, and the filmmakers in this essay are too sophisticated to avoid such a shallow trap – the issue is how and why the incomplete memories projected via documentaries are preferable to the fantasies depicted by the state news making apparatus.

Consider the way “Tape” portrays the local condition: residents exist within the messiness of the historical and material condition, while the views projected on television from Beijing appear ideologically cut adrift in time, agenda-laden, pitching spectacle even when conveying facts. When Li Ning cuts his foot in the presence of a television presentation of the Olympics – an event that the government used as a rationale to mandate the destruction of hutongs such as the one Li Ning climbs over – the television is a prop set up within his film to signify a contrast in points of view.

In Wu Wenguang’s village films, the contrast between a documentary uncovering the past and the state’s projections is accentuated by movement: the handheld documentary camera moves while it captures a television, an artefact projecting messages approved by the state, in a state of rest: positioned within the screen, somewhere in the background, in a set location that the camera revolves around. Again we find a distinct rhetorical appeal at work: perhaps audiences of these films will in turn make movements of their own (with cameras, with words, with solidarity, with knowledge) that delineate the margins of state approval.

James Wicks is an associate professor of literature at Point Loma Nazarene University. In the summer of 2014 on June 16-22, Chinese documentarian Wu Wenguang joined a group of film scholars at the “The Tangled Dynamics of Independent Filmmaking in Contemporary China: Wu Wenguang 吴文光 as Artist in Residence at UC San Diego” conference. Each day, participants watched hours of documentary footage together, including Li Ning’s Tape and Wu Wenguang’s films and more. In the afternoon, they discussed ideas, theories, and questions with Wu Wenguang. This essay is an excerpt of a longer piece written in response to the numerous films they watched and the conversations inspired by Wu Wenguang’s oeuvre. Image Credit: Bartenders gaze at a television presenting the 2008 Summer Olympics Opening Ceremony in Last Train Home.