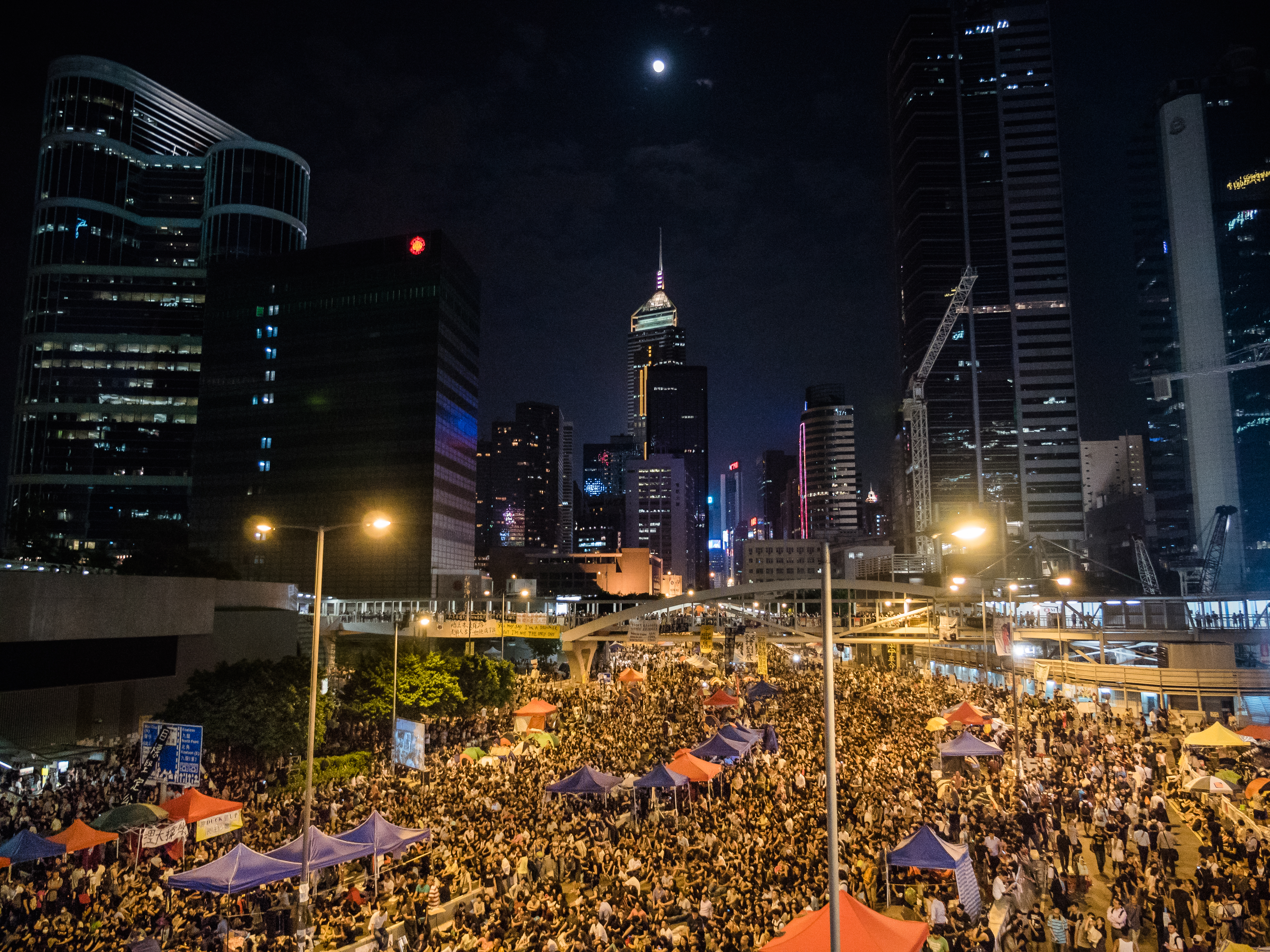 A couple of weeks before the second anniversary of the 2014 Umbrella Movement, the massive 11-week street occupation demanding genuine suffrage of the Chief Executive election, Hong Kongers headed to the polling station to vote for Legislative Council members. The election demonstrated the continuing influence of the Umbrella protests.

In terms of seat distribution, the results appear to be a continuation of the political stalemate of the last election in 2012. Among the total 70 seats, the pro-establishment camp obtained 40 seats, down from 42, while the pan-democratic parties and others received 30 seats, up from 28. The opposition’s slight seat gain is not expected to change the existing political balance. The opposition camp still can adopt the filibuster tactic to postpone controversial issues indefinitely. This is because it succeeded in maintaining a majority of popularly elected geographic constituencies (19 out of 35), so that the pro-government camp is prevented from revising the procedural rules to outlaw the filibuster. It also holds more than one-third of total seats, the necessary threshold to veto government-proposed political reform packages.

With the expected continuation of the standoff between the pro-Beijing forces and the pro-democracy camp, it is of interest to understand how the Umbrella Movement affected this election. On the surface, the protests were not talked about much during the election. Among the pro-Umbrella candidates, there was the perception that the incident had become a “negative asset” because of polarization and the failure to achieve the movement’s goals. Particularly since the so-called “Fishball Revolution” in February 2016, the anti-police uprising against the eviction of street vendors during the lunar calendar New Year holiday, large-scale collective action has gained notoriety among the stability-minded electorate. Pro-Beijing candidates on the other hand, blamed the opposition for its obstructionism in the legislative process, without mentioning the Umbrella Movement in particular.

Nevertheless, we can still identify some visible effects that came out of the great protest two years ago. First, three social movement activists were elected to the Legco, without joining the existing pan-democratic parties. Eddie Chu, a conservation activist since 2006, won first place in New Territory West, receiving more than 80,000 votes. Chu’s career is a catalogue of movement activism accumulated in the past decade. He was active in the preservation of Star Ferry Pier (2006), and Queen’s Pier (2007), and the anti-Express Rail Movement (2008-2010).

Lau Siu-lai, a college lecturer, became a noted community activist by staging street forums (“Teacher Siu-Lai’s Democracy Classroom”) during and after the Umbrella Movement. During the election, Lau championed for elderly and indigent welfare needs, and she won third place in Kowloon West. Nathan Law, formerly Secretary General of the Hong Kong Federation of Students, the leading student organization during the Umbrella Movement, won second place on Hong Kong Island. Law represented Demosisto, a newly-founded party led by Joshua Wong, probably the most recognizable student leader in the world.

Coming from different movement backgrounds, Chu, Lau and Law’s success demonstrated the vitality of Hong Kong’s civil society. For a decade, movement activists had been at the forefront of promoting new ideas and identifying social problems, whereas the established opposition parties often ended up as followers. Moreover, Chu, Lau and Law pledged to uphold the principle of “democratic self-determination” among Hong Kong people – a defiant gesture after the failure of the Umbrella Movement to secure genuine suffrage. As such, they were called the “Self-determination Trio”.

Second, localism, a political tendency that sees Hong Kong as a distinctive unit different from China, came in a great variety of ideologies. These include Hong Kong independence, nationalism, permanent separation of Hong Kong and China, reversion to British rule, the prioritization of Hong Kongers’ interests, and even anti-immigrant nativism. In 2012, Civic Passion was the only localist organization participating in the election. With a setback in the District Council election in November 2015, there used to be a perception that localists were a group of unelectable political outcasts. This time, three localist candidates were elected into the Legco.

Civil Passion, Wong Yuk-man (an anti-communist veteran Legco member), and Chin Wan (the localists’ intellectual “Godfather”, whose 2011 bestseller popularized the idea that Hong Kong could be an independent city-state) teamed up for the 2016 election. Another localist alliance emerged, led by Youngspiration, a new political organization formed in 2015, noted for its pro-independence remarks. The Youngspiration alliance fielded four candidates. Therefore, two versions of localism (permanent separation of Hong Kong and China versus the nationalistic pursuit of independence) competed against each other during the election. Youngspiration appeared to be more popular among young voters, especially since Edward Leung Tin-kei, a charismatic pro-independence student leader who was barred from the election, offered his personal endorsement. Cheng Chung-tai of Civic Passion and Youngspiration’s Yau Wai-ching and Baggio Leung won the election.

Lastly, the Umbrella Movement also represented a generational revolt in which young Hong Kongers’ economic frustrations were a noticeable driving force for protest participation. Students emerged as the recognized movement leaders partly because supporters were more willing to trust their commitment and idealism than other established pro-democracy leaders and politicians. As such, Hong Kong voters were willing to vote for young candidates despite criticism regarding their inexperience and unprofessionalism. Nathan Law, Baggio Leung, and Yau Wai-ching were all under thirty. Moreover, the pan-democratic parties evidently took note of the changing climate and attempted to present a younger image. For years, the Hong Kong Democratic Party has been criticized for its gerontocracy. However, Roy Kwong, a 32-year-old district councilor famous for his literary writing, won first place in the super seat election, receiving nearly half a million votes.

In sum, in spite of its seeming failure to win concessions from Beijing, the Umbrella Movement has left an indelible legacy on Hong Kong’s electoral politics. Civil disobedience, a more prominent indigenous identity, and young peoples’ enthusiasm for political participation were its visible results.

Here, it would be of interest to cast a comparative glance on Taiwan, where most observers would agree that the Democratic Progressive Party’s landslide in the presidential and legislative election in January 2016 was made possible in part by the eruption of the Sunflower Movement in March 2014. In both societies, the emergence of large-scale student-led occupy protests spawned subsequent electoral participation among young people and strengthened indigenous identities vis-à-vis China.

Nevertheless, a landslide victory for the opposition camp was out of the question under Hong Kong’s semi-democracy. Only 40 out of 70 Legco seats were open to the popular vote. And the proportional representation system was designed to fracture political opposition and prevent it from winning a clean sweep. Moreover, the Self-determination Trio and localists emerged as competitors to the opposition, whereas Taiwan’s New Power Party, currently the third-largest party in legislature with five seats, campaigned as a partner to the Democratic Progressive Party. Clearly, Taiwan’s more unified and better-organized opposition party was able to coordinate the electoral campaign with its new forces. Finally, it will remain fascinating to observe subsequent developments once these new forces have entered the legislative arena, both in Taiwan and Hong Kong.

Ho Ming-sho is Professor in the department of sociology, National Taiwan University, and a Non-Resident Senior Fellow at the China Policy Institute. He published Working Class Formation in Taiwan in 2014 and is currently working on a monograph on Taiwan’s Sunflower Movement and Hong Kong’s Umbrella Movement. Image credit: CC by Studio Incendo/flickr.

Education policy in China
Taiwan and Free Trade Agreements – Missing the Wood for the Trees?