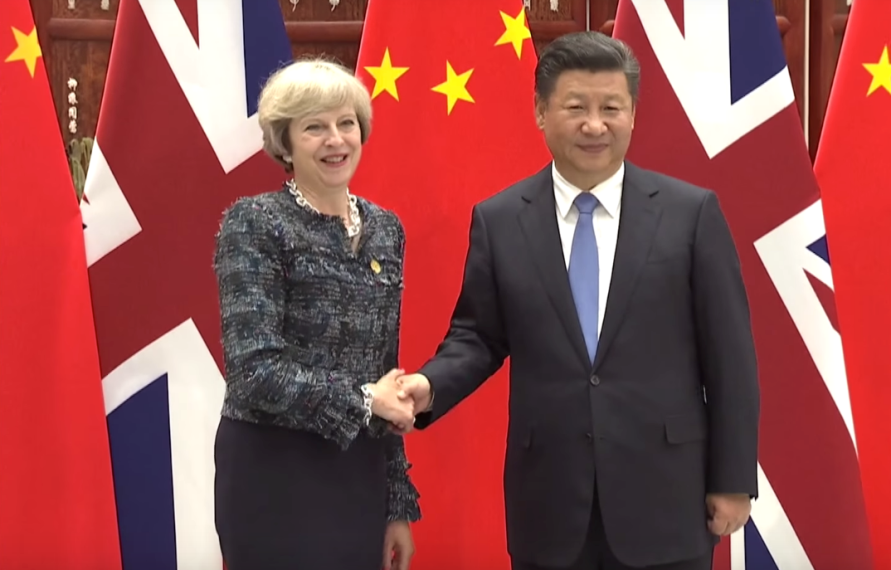 “The golden era of British-Chinese relations will continue,” Prime Minister Theresa May stated September 2nd on her way to the G20 in Hangzhou, China. Will it however, be the 24 carat of the days of Cameron and Osborne? Or have delays linked to Hinkley Point irrevocably tarnished the gleam of relations? If President Xi Jinping’s statement during the G20 Summit is any indication, he is willing to ‘show patience,’ giving Mrs. May time to frame and launch her vision of British foreign policy and economic relations.

As one who seems to keeps her cards close to her chest, the question is what shape will this come in?

Britain’s China policy should be about achieving its national interest. Far from an unusual demand, the Americans, Europeans and most definitely China, have core objectives that must be maintained. Under Blair it was all about humanitarian intervention and human rights. Cameron offered us a more commerce-focused approach. For May, saddled with the aftermath of Brexit, a balance must be achieved.

Mending Fences—It’s all about Trust

It is imperative to remember that the Chinese are not renowned for their patience. As May announced delays and called for a reassessment on China’s flagship project with Britain, a mere week passed before Chinese Ambassador to Britain, Liu Xiaoming responded. With national security concerns now at the forefront, regarding the risk Chinese partners may represent, the linchpin is nowTrust—China’s loss of trust for Britain, its current main European economic partner.

Liu wrote on August 8th in the Financial Times, ‘Britain is one of the key destinations for Chinese companies seeking to invest overseas…if Britain’s openness is a condition for bilateral co-operation, the mutual trust is the very foundation on which this is built.’

China has a long memory, and Britain’s track record is mixed at best. When compared to other European economies, the historical baggage of Britain’s colonial past, the Dali Lama freeze-out of 2012 and continued efforts to intercede on Hong Kong, for China the attractive tangibles don’t necessarily outweigh the negative.

It’s all about Attitude

Critics saw the former government as moving too quickly into China’s embrace—myself included. In engaging with China remember, when it comes to negotiations they are all about status, respect and consistency.

Firstly, to be a serious partner, Theresa May’s dream team: Phil Hammond (Chancellor), Boris Johnson (Foreign Secretary) and Liam Fox (Britain’s first Minister for International Trade) need a strong united front. Any territorial in fighting will be seen as a weakness. May’s operation plan will never succeed if her generals aren’t in line.

Secondly, there needs to be a concerted effort to shift British-China relations. It can’t be about coveting China anymore. Harry Potter, Shakespeare and David Beckham, the cornerstone of British soft power, aren’t going to cut it. While Chinese tourism brings an estimated £500m per annum, selling Britain as cultural and historical icon offers little substance for a long-term and balanced relationship.

Thirdly, Yes the new government needs to woo, but more importantly it needs to go into negotiations on an equal (not inferior) footing. This is imperative.

Since 2012/2013, Britain has become China’s top destination for investment. Therefore, beyond parking funds in property purchases, May needs to secure the UK’s position as the expected and natural destination, not a grateful one. British technology, skill sets, industrial know how, innovation, research and development, each represents an opportunity for Chinese investment and capital. The proof is in Britain’s tech sector, which secured £2.5 billion in venture capital investment in 2015.

Know your Audience—Have a Plan

With Britain’s new government still reeling from the potential political and economic costs of Brexit, China as the world’s second largest economy is in a position of strength for any future negotiations for direct trade links. But just as we’ve left the EU’s ‘development strategy’ bed, we should avoid jumping into a Chinese one.

Success, above all, requires a clear China policy and strategy with identifiable core objectives, something Britain has long been missing. As I’ve written before, in addition to ‘…showing how Britain can contribute to China’s economic reform… [the government must stress] how China can enhance Britain’s own industrial base and technological comparative advantages—for Britain.’

Prime Minister May is right in stating that Hinkley does not represent the entire Sino-British relationship. For China however, this was the prize of Xi Jinping’s 2015 state visit. To dismiss its significance would be unwise.

Should it come to a renegotiation of terms, May should take this occasion to shift the focus of relations beyond highly sensitive and security laden sectors that Chinese investment has dominated over the past 3 years—including water, rail, aviation, and energy.

While the Chinese are inherently pragmatic by nature, May should frame this decision around Brexit—partially resolving China’s concerns that it is the sole target or impetus behind the Hinkley reassessment.

Moving forward, Cameron and Osborne have left a stamp on British-China relations which May should build upon—including AIIB membership, record trade and investment relations, and participation in China’s currency internationalisation and financial reform.

The latter is an invaluable opportunity for securing the City of London’s international footprint and stature after Brexit. With IMF’s efforts to broaden the use of its SDR basket and issue bonds, and Britain topping RMB centres outside Hong Kong (UK RMB payments rose 21% y-o-y in March 2016), it is well positioned to participate in a central pillar of China’s current 13th Five year plan: finance and service sector.

At the end of 2015 China was Britain’s 6th largest export market. As China’s continues its economic reforms, a relatively underutilized resource has been UK’s domestic businesses—long ready to do business with China. Attracted by an expanding services sector and a market of 1.3 billion consumers, May’s China policy should stress job creation, strategic industrial development, collaboration and investment.

May is being offered an opportunity to assert an enlightened and forward thinking China policy built around Britain’s national interest. This is long overdue. But make no mistake; this isn’t a time for hard line negotiations. Britain needs China. Successful bilateral negotiations require sincerity, strength and equality, not dependency. But it also requires knowing your audience. For China it’s all about quantifiable benefits.

Winnie King is a Teaching Fellow at the University of Bristol where specialises in East Asian Political Economy and Sino-EU Relations. This article was first published on LinkedIN and can be found here. Image credit: Screencap/Youtube.