Translation in Activism and Cyber-nationalism in China. 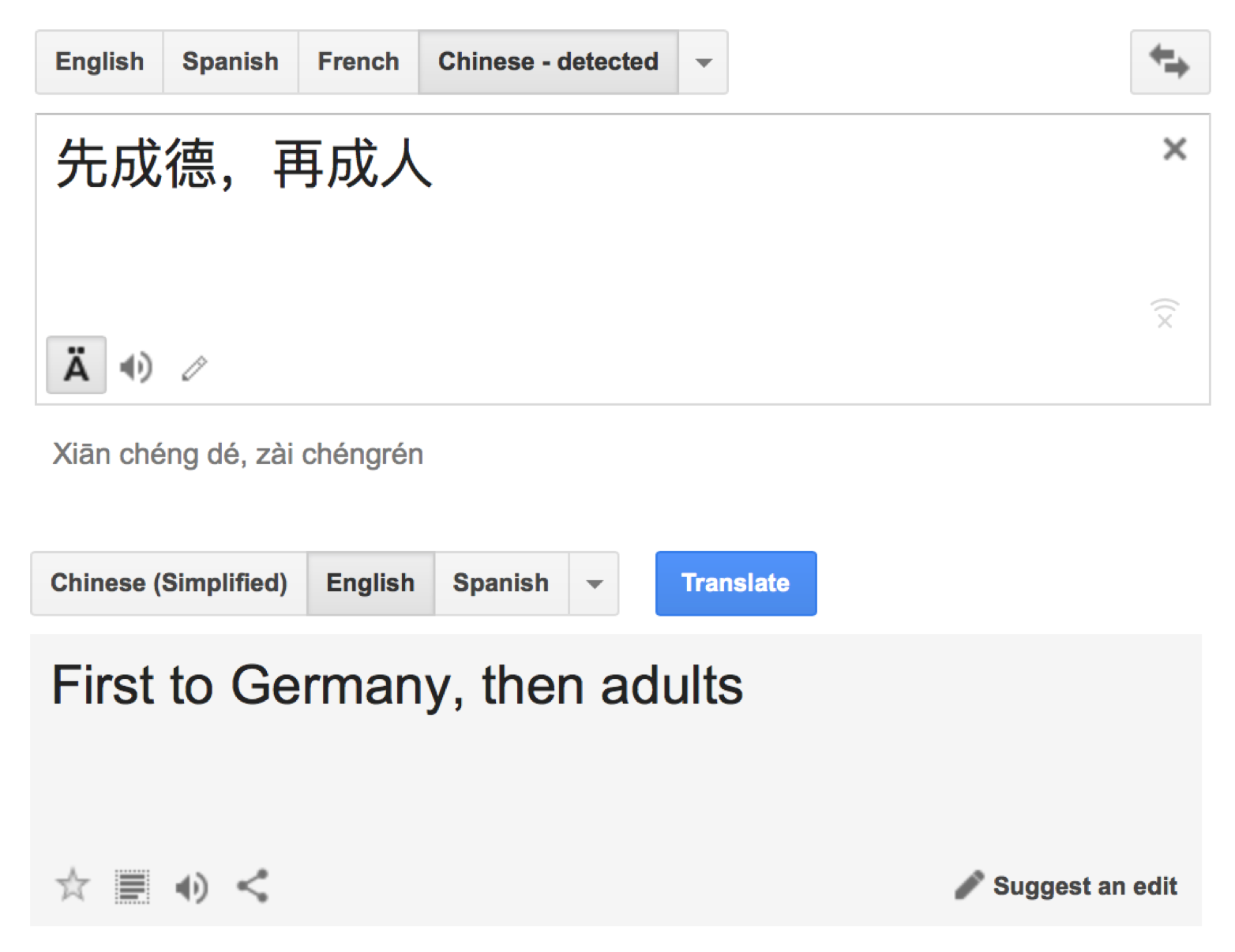 On January 20, 2016, young nationalists in the PRC, now nicknamed Little Pink, launched an “expedition” from the popular Baidu message board “Diba” to the Facebook page of Taiwan’s newly elected president Tsai Ing-wen. They posted large numbers of emojis, called “emoji packs” (biaoqing bao), on Tsai’s Facebook page, attacking her pro-Taiwanese independence position while expressing pride for the natural beauties, cuisine, and history of mainland China. The online organizers of this “expedition” set up a translation team to render some of their slogans in English. A popular song called “Missing home” (xiang chou), with lyrics like “My wandering son, do you still remember the sweetness of our land,” was circulated in multiple languages.

An official Chinese slogan about socialist morality called “eight honourable things and eight shameful things” was translated into English and bilingual versions were posted on Tsai Ing-wen’s Facebook page. The first of these “eight things” reads: “Honour to those who love the motherland, shame on those who harm the motherland.” Commentators noticed to their amusement that a Confucian saying meaning “Develop morality first, then one turns into a person” was translated as “First into Germany, then adults” – which only Google Translate is capable of.

Translation may narrowly mean the rendering of texts from one language to another, or broadly as the communication of expressive forms and experiences from one context into another – the latter is sometimes called cultural translation. Translation in both senses is integral to contemporary activism in China. Inside China, civil society groups, cyber-nationalists, human rights advocates and dissidents are engaged in translation activism. Outside of China, civil society groups and dissident communities use translation to shape public opinion about China, to voice dissent, or to press for transparency and accountability inside Chinese politics. Some of these translation projects have a clear advocacy orientation.

Besides cyber-nationalism, translation plays an important role in environmental activism, feminist activism, labour activism, human rights activism – indeed in just about all the major areas of contemporary activism in China. This is because contemporary activism often has a transnational character and translation plays a role in reaching audiences of other languages and cultures or in bringing international practices and discourses closer to home. Environmental activists in China, for example, appropriate specific vocabularies and the NGO organizational form in global environmentalist circles through cultural translation. Similarly, among the wide range of practices among Chinese feminists are efforts to translate the transnational concept of violence against women into local action.

Studying translation in and as activism promises to shed light not only on the role of language and translation in political struggles, but also on the meaning of the particular kind of activism in which translation is deployed. To return to the example of “First into Germany, then adults” mentioned above. The use of this translation is in fact quite revealing. It distinguishes Little Pink nationalists from Mao’s Red Guards. Red Guards would never cite a Confucian saying approvingly, because Confucianism, along with other elements of traditional Chinese culture, was the target of attack in the Cultural Revolution. Little Pink and other varieties of nationalists in China today separate themselves from Red Guards by lionizing what they now glibly call “guo xue”, or traditional Chinese learning.

The example of “First into Germany, then adults” reveals a second difference between Little Pink and Red Guards. Little Pink patriots grow up in an information age whereas Red Guards were products of the Cold War. If they want to translate a Confucian saying into English, it would not be surprising if their first instinct was to try Google Translate. The digital culture in which they are immersed, including the culture of gaming and online literary communities, goes a long way toward explaining their particular kind of behaviour in their “expedition” (which is outside the scope of this blog).

Finally, the fact that Little Pink patriots attempt to display their slogans and emojis in both Chinese and English is revealing. They did not have to use English to protest against their Taiwanese targets who understand Chinese perfectly well. The adoption of the English language is a gesture to the world, perhaps a cry for global attention. Judging from this essay in The Economist, they succeeded.

Guobin Yang is an Associate Professor of Sociology and Communication at the Annenberg School for Communication and Department of Sociology at the University of Pennsylvania. He is the author of The Power of the Internet in China: Citizen Activism Online (Columbia University Press, 2009), The Red Guard Generation and Political Activism in China (Columbia University Press, 2016), and Dragon-Carving and the Literary Mind (2 vols, Beijing, 2003). He is the editor of China’s Contested Internet (2015), The Internet, Social Media, and a Changing China (with Jacques deLisle and Avery Goldstein, 2016), and Re-Envisioning the Chinese Revolution: The Politics and Poetics of Collective Memories in Reform China (with Ching-Kwan Lee, 2007). He co-edits the new SAGE journal Communication and the Public. He tweets at @Yangguobin. For more information, please see: https://www.asc.upenn.edu/people/faculty/guobin-yang-phd