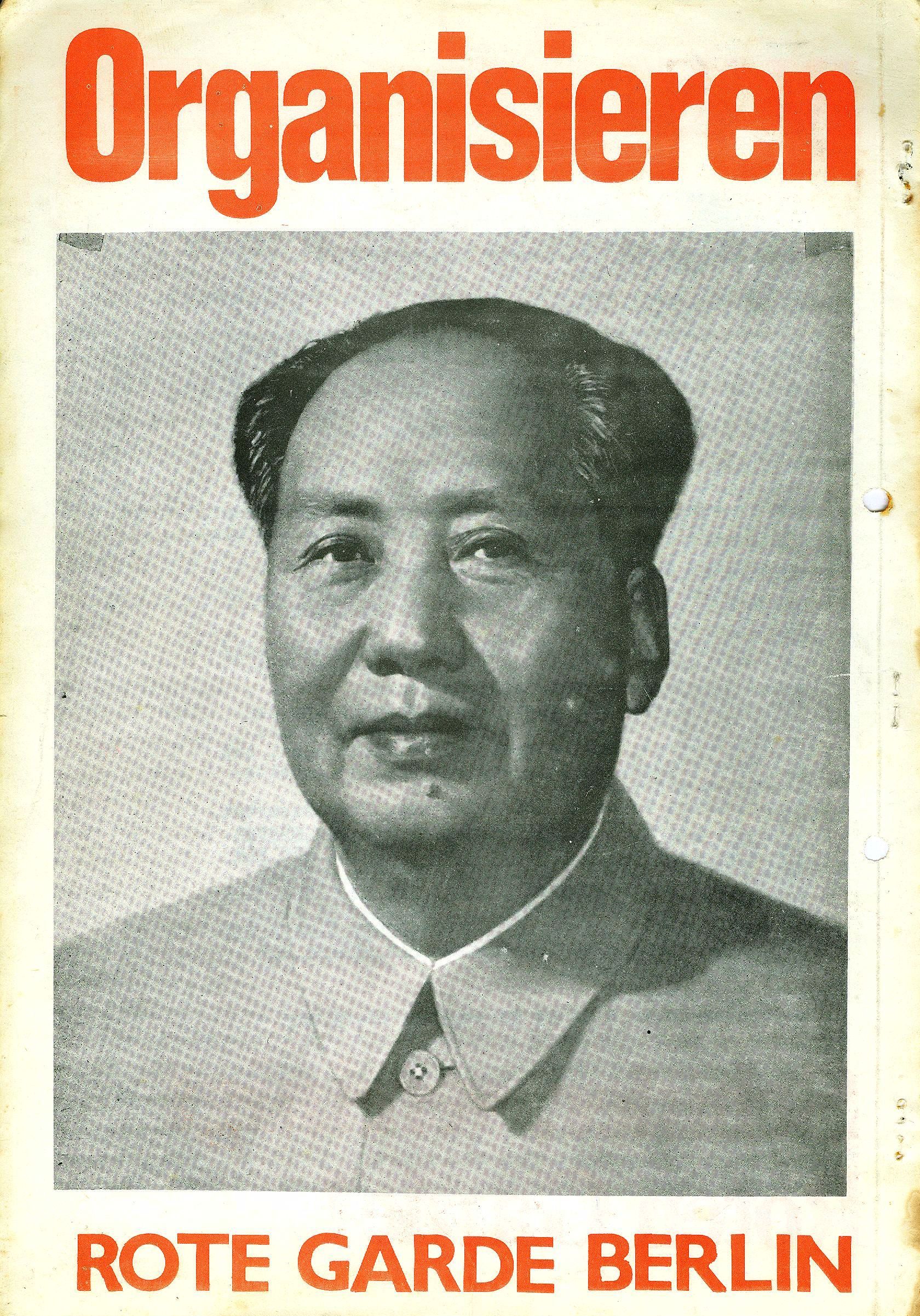 Only months before many of their Chinese models began to be sent to the countryside “to be re-educated by the peasants”[1], a Maoist youth group named after the Red Guards emerged in West Berlin in August 1968. Over the following year, the Rote Garden [Red Guards] became a nationwide phenomenon in West Germany that preceded and influenced the first transregional Maoist cadre party Kommunistische Partei Deutschlands/ Marxisten-Leninisten [Communist Party of Germany/Marxists-Leninists/KPD/ML]. Founded independently, some local Rote Garde groups joined the party later as its youth organization. Taking a look at the barely studied radical left-wing youth movement shows how parts of the anti-authoritarian ’68 movement transformed into dogmatic Maoist organizations. One of the most exciting questions in this context remains: what direct role did Chinese publications and institutions play in this transition process? Throughout the 1960s, liberation and protest movements arose worldwide that referred to the ideas of Mao Zedong and the Cultural Revolution. When the Sino-Soviet split manifested itself in the first half of the decade, China’s publishing house aimed at overseas markets, the Foreign Languages Press, shifted from translating a wider range of writings to propaganda literature. Publications including the “Polemic on the General Line of the International Communist Movement” ideological pamphlets, foreign language journals (e.g. “Peking Review”), Quotations from Chairman Mao Tse-tung, commonly known as the Little Red Book, and Selected Works of Mao Tse-tung were distributed worldwide to promote Mao Zedong Thought and Communist China as the new center of world revolution while denigrating the Soviet Union. Moreover, the global network created by the Chinese distribution center International Bookstore aimed to “coordinate international revolutionary movements.”[3]

After the outbreak of the Cultural Revolution in the summer of 1966, images of the Red Guards were circulated. Next to Mao himself, the rebelling youth became the face of the “continuous revolution”, which seemed to mainly fight against traditional power structures, encrusted bureaucracies, and capitalist restoration. The Red Guard movement (roughly corresponding with the period identified by Daniel Leese as the “Cultural Revolution” itself, August 1966 – autumn 1968)[4] intertwined with the ’68 movement in West Berlin and West Germany. Politicized by the U.S. war in Vietnam and disappointed by the rapprochement of the Soviet Union to the West, the West German New Left was susceptible to the “third way” China offered: a radical political alternative to Western capitalism and Soviet state socialism during the Cold War. Journalists and activists discussed the Cultural Revolution as a model for West Germany. First, small Maoist groups emerged. Members of the left-wing Kommune 1 [Commune 1] dressed up as Red Guards, read aloud from the Little Red Book at a court hearing, and ordered and resold thousands of copies.

Researchers on ’68 agree that, without these rather playful references to Maoism of the mostly anti-authoritarian movement and its decline, the emergence of dogmatic Maoist parties would not have been possible.[5] Following the wane of the student movement at its height, larger groups emerged which studied Maoism for building a revolutionary party. Although this is just one part of the story, the Chinese role has been underestimated so far: against assumptions in the scholarly literature[6], West German Maoists had direct contacts to Chinese institutions beyond left-wing activists receiving propaganda literature at the Chinese embassy in East Berlin. An organization that illustrates this especially well is the Rote Garde.

In August 1968, the Rote Garde Berlin appeared publicly for the first time. At a demonstration against the Warsaw Pact invasion of Czechoslovakia (CSSR), its mostly teenage members distributed a leaflet addressed to the “Czech revolutionary youth.”[7] “Do your best and destroy the invading enemies!”[8] It advised in the words of Mao, next to his iconic portrait. Besides, it cited one of his “quotations”: “Everything reactionary is the same; if you don’t hit it, it won’t fall.”[9] Like many others, they succumbed to the appeal of the handy Little Red Book.

As intended, when the collection of Mao quotes was first compiled for the People’s Liberation Army, it provided suitable slogans for many instances. In the text of the first flyer, the Rote Garde Berlin identified the struggle of the Czech youth with their own protest against the Axel Springer publishing company. The coverage of the conservative publisher had been accused of stirring up hatred that led to the assassination attempt on student leader Rudi Dutschke in April 1968. Important campaigns of the student movement afterwards had failed. Many blamed the lack of organizational structure of the leading student union Sozialistischer Deutscher Studentenbund [Socialist German Student Union/SDS] and the Außerparlamentarische Opposition [Extra-Parliamentary Opposition/APO] overall.

Against this backdrop, Soviet troops marched into the Czech capital ending the reform efforts of the Prague Spring in August 1968. The invasion was a turning point for many West German left-wing activists. No other incident seemed to so drastically demonstrate the “social imperialism” that the Chinese Communists accused the Soviet leadership of. The CCP also opposed the reforms in the CSSR and accused the Czech and Soviet “revisionists” of cooperating in “selling out the sovereignty and interests of the [Czech] people in the most abominable manner”[10], as the Peking Rundschau shortly after the incident stated. Seemingly, many West German left-wing activists overlooked that the Chinese government blamed the Prague Spring for making the invasion possible in the first place.

Members of the anti-authoritarian pupil and apprentice movement in West Berlin founded the Rote Garde Berlin. Rather loosely organized at the beginning, their first actions were directed against the perceived authoritarian educational system. A leaflet campaign at schools in West Berlin fought the expulsion of a student, who had distributed flyers with Marxist-Leninist thought in class.[11] With a similar campaign procedure, they created study collectives dealing with Marxism-Leninism and Mao Zedong Thought.

Starting with a call to read Mao’s thoughts on how the peasant movement in Hunan organized itself to then overthrow the local landlords and order in 1926-27 (Selected Works Vol. 1, part one), they gradually institutionalized the study of Mao Zedong Thought: study collectives were first built, and then regionally integrated to be developed into a “strong revolutionary organization.”[12] The goal was to “contain the old APO-plague of disorganization that has also affected the student movement.”[13] Moreover, a marching block for Red Guards at demonstrations was supposed to ensure the spatial delineation from former companions of the student movement.

For a particularly spectacular action, these lines were blurred again: on the occasion of Mao’s 75th birthday, Red Guard and APO members stormed the former building of the Chinese embassy before the Communist Revolution 1949. They claimed the right to the location to the PRC’s embassy in East Berlin.[14] Files of the Federal Office for the Protection of the Constitution and publications at that time reveal that the Rote Garde Berlin had connections to the embassy then. Moreover, different Maoist youth groups had relations with Chinese embassies, Xinhua news agency, or personal political contacts in China and Albania.[15]

After the official founding of the first transregional Maoist party KPD/ML on New Year’s Eve 1968, the Rote Garde Berlin joined the party as its youth organization. Despite common suppositions, the older Maoists wooed the Rote Garden. The affiliation to the Leninist cadre party led to reorganization: the group’s name was slightly adjusted to Rote Garde – Marxistisch-leninistische Jugendorganisation [Red Guard – Marxist-Leninist youth organization], and a central organ superseded the leaflets. During 1969, a statute was resolved, which stipulated “the fight against manifestations of bourgeois ideology-subjectivism”, and consequently, anti-authoritarian members were expelled. The demarcation from the student movement started with building Marxist-Leninist/ Mao Zedong Thought study circles after the Soviet invasion of Prague. But it was not until the Rote Garde was subjected to the structure of the cadre party led by old Communists in their mid-Forties that the break from the APO became distinct.[17]

Until spring 1970, approximately 30 local Rote Garde groups were founded in West Germany, which claimed to count 900 members and sympathizers. Some also joined the KPD/ML. The West German authorities monitored the movement with concern. Reports stated how they tried to recruit students, apprentices, and young workers. A runaway teen member was returned to his parents by the police. Rumors about weapon arsenals, members practicing gun shooting and knife throwing were examined – but later proved to be unfounded.

In March 1970, a conflict between the Rote Garden in North Rhine-Westphalia and the Central Committee of the KPD/ML in Hamburg led partially to the first split of the party. The dispute revolved around the weighting of theory and practice in the political work of the organizations. While the leadership insisted on focusing on theory first, elaborating the party’s “class analysis,” the young Maoists called for practice. They wanted to conduct campaigns and demonstrations, distribute factory newspapers and literature to mobilize young workers right away. In principle, they were displeased with the party deploying a leading committee and making decisions for the Rote Garde.

To regain autonomy they employed a slogan of Mao: “Bombard the Headquarters!”[18] Featured on a big-character poster in the summer of 1966, the underlying text called to fight against supposedly capitalist leaders within the CCP. Four years later in West Germany, it heralded a series of splits, fractionations, and renaming that accompanied the growing Maoist movement in West Germany throughout the 1970s. 50 years after the beginning of the Chinese Cultural Revolution, the detailed historical evaluation of these transnational transfers has just begun. Felix Wemheuer has pointed to the parallel – yet delayed – developments of the Chinese and West German “cultural revolutions”[20]: around the time that the Red Guards were replaced by workers’ propaganda teams to end factional battles and regain state control, left-wing activists in West Germany started building authoritarian Maoist organizations and went to the factories. Through direct interaction with Chinese counterparts and close readings of propaganda literature, the foreign followers might have understood the direction which Chinese Communism was developing in better than is often assumed. China was more than just a screen onto which romantic notions were projected.

Mascha Jacoby is a PhD student at the joint graduate programme “China in Germany, Germany in China”, Universität Hamburg and Fudan University. Her dissertation project focuses on direct interactions between West German activists and Chinese state institutions from 1950 to 1980. It retraces the flow of propaganda literature from Beijing to Berlin, reconstructs the actions of Chinese officials in West Germany during the founding of the first Maoist organizations, and follows the routes taken by West German left-wing delegations in the People’s Republic of China. Image credits: CC by Mao-Projekt.

[1] Renmin Ribao, ‘Mao Zhuxi Yulu’ (Beijing, 22 December 1968). The students were sent down as ‘zhiqing’ (often referred to as ‘sent-down youths’), and many were former Red Guards.

[15] The findings of this article are partly based on files of the Bundesamt für Verfassungsschutz (= Federal Office for the Protection of the Constitution), which will be cited in my forthcoming dissertation.

Banish the Impoverished Past: The Predicament of the Abandoned Urban Poor.
Tianxia: Imperial Ambition or Cosmopolitanism?