Are Chinese-style gardens built outside China a form of ‘soft power’? 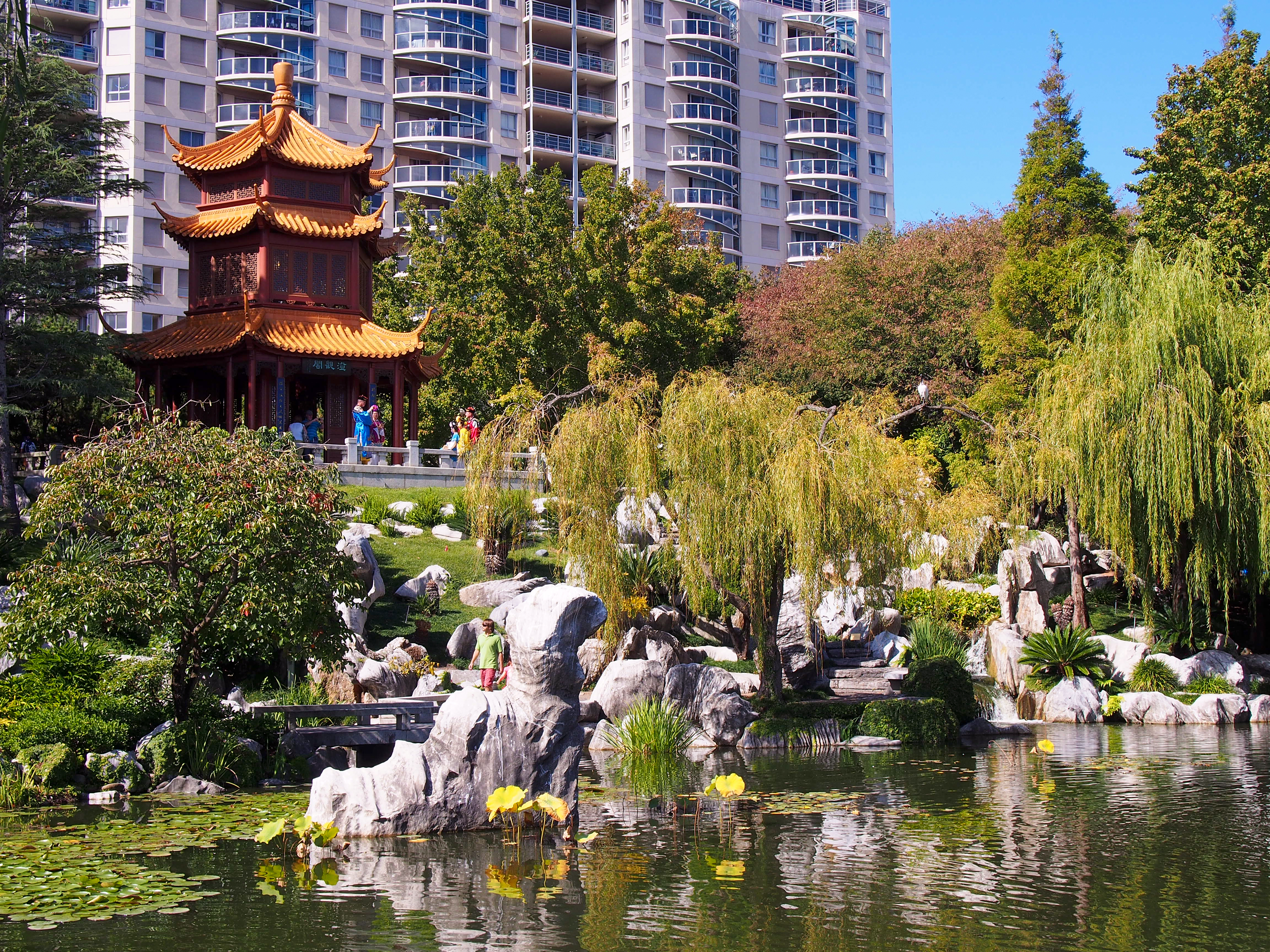 Chinese-style gardens have been built outside Chinese territories since the 17th century. However, in the 20th century, they were considerably outnumbered by Japanese-style gardens by as many as 10 to 1[1]. For a long time, the concept of the Japanese garden seemed to have captured non-Asian imaginations of what an East Asian garden should look like, and amalgams between Japanese, Korean, and Chinese cultures contributed to this confusion. Even after the re-opening of China and the subsequent string of Chinese-style garden projects built abroad during the 1980 and 90s (the most famous is probably Aston Court at the Met), this state of field held true.

In the 21st century, however, Chinese landscape diplomacy seems to have garnered more momentum. For example, over the first half of 2016, local newspapers have commented upon projects of Chinese-style gardens in Wellington and Invercargill (New Zealand); St Paul, Minnesota and Birmingham, Alabama (United States); Adelaide (Australia) and Dublin (Ireland). Although still no match for the number of Japanese-style gardens built abroad, the field of landscape diplomacy nevertheless seems to be increasingly relevant to discussions on Chinese soft power and its relative success. This short commentary aims to rekindle discussion on this topic, notably in terms of whom Chinese-style gardens as a soft power tool might be aimed at, and what type of identity they attempt to project. The fascination for Chinese culture was probably at its strongest in 18th century Western Europe, when descriptions of Chinese gardens garnered significant attention among intellectuals. Beyond the immediate exotic attraction related to the craze for Chinoiserie, Chinese gardens were seen as “expressions of social, political, and economic values”[2], and their role in supporting discourse on national identity was not underestimated. Jesuits who had been admitted at the Qing court often referred to the Yuanmingyuan (or Garden of Perfect Brightness) in Beijing as the ‘Versailles of China’, and saw the palaces and gardens as an expression of the emperor’s power. However, at the turn of the 19th century and as the international power balance shifted from the Chinese to the British Empire, the previous admiration[3] of Chinese gardens in the Western[4] world was almost universally replaced by criticism and disdain. Through their gardens, the diplomats and traders who would eventually start the Opium Wars in a bid to open Chinese harbours to unrestricted trade, were actually discrediting Chinese culture and government.

It can be argued that the end-game of this reversal of opinion was the well-known looting and burning of the Yuanmingyuan by British and French troops under the orders of the Earl of Elgin in 1860. Victor Hugo ironically commented that “this is what civilization has done to barbarism”, describing France and England as two bandits. When sealing the fate of the park that had been described as a paradise on Earth, the reasoning behind Elgin’s motives probably went beyond simple greed, insensibility to Chinese art, or revenge for fallen comrades. Destroying an imperial garden was effectively to amputate some of the Qing empire’s projected power and stability; gardens can be potent symbols, despite their ephemeral nature.

I now fast-forward to the last decades of the 20th century and the PRC’s[5] exceptional economic growth. Much like Japan when it was at its peak of economic growth before 1992, China is regarded as an economic ‘threat’ by other big economies, and increasingly, one that is also military. In its own time, Japan mastered the use of landscape diplomacy to appear more outwardly peaceful and friendly: that China would also use such strategy makes sense as their gardening traditions have similar cultural value. Yet using Chinese traditional culture to represent China abroad was not without challenges after the Cultural Revolution where the ‘Four olds’ were targeted and destroyed. One consequence was that the transfer of knowledge between experts and apprentices was interrupted, and Chinese gardening, especially rockworks, happens to require highly specialised workmanship. Nonetheless, a handful of projects were carried out in diverse countries in the 1980s, inaugurating a new phase of Chinese garden construction, characterised by its diplomatic function, with names typically putting emphasis on ‘friendship’ or ‘harmony’. Earlier Chinese-style gardens were usually built due to their owner’s taste for Chinoiserie without the involvement of the Chinese state, such as Biddulph Grange (England). China’s soft power is often described as being loaded with heavy political subtext, in many cases deemed too obvious to be fully effective. However, it seems that landscape diplomacy elicits relatively few concerns. In a piece published by The Economist, the author seems to attribute delays in Washington D.C.’s Chinese garden project to cold Sino-U.S. relationships. If anything, the number of ongoing projects in the United States seems to indicate that, on the contrary, Chinese-style gardens are welcome. No matter who the receiving country might be, delays – which range from months to years – are often due to practical issues rather than an indicator of cold diplomatic relationships. The Chinese government is prepared to pay a significant proportion of the construction costs, and often helps with securing building materials and a team of specialists. However, as is to be expected, the rest of the budget and the maintenance of the garden are left to the discretion of the local government. Local citizens, understandably, have their own opinions regarding the worthiness of these publicly-funded projects. As a result, fund-raising is a tool frequently yielded by those in charge of bringing Chinese-style gardens to completion and maintain the quality of the installations afterwards. The success of fund-raising is often related to the interest and size of the local Chinese community. This community can engage in tasks such as naming the garden’s features and producing related calligraphy; the perceived authenticity of the Chinese-style garden depends heavily upon these sorts of acts.

The whole inception, funding, and building process of such a garden is well illustrated by the case of Dr. Sun Yat-Sen’s garden[6] in Vancouver (Canada). Success depends on close cooperation between the receiving country’s national and local governments, as well as a willingness to find compromises between authenticity and local building regulations. In Vancouver, the Chinese garden project was first talked about in 1972 as part of the Chinese Cultural Centre located in Chinatown. The project started to concretise from 1980 onwards, after the artisanal team who made Aston Court in New York was approached. Until the completion of the project in 1986, many hurdles had to be cleared, and the Chinese community in Vancouver played a key role in clearing repeated financial issues as the budget was revised. The Sun Yat-Sen garden certainly benefited from non-Chinese support, and is enjoyed by a diverse crowd of visitors. Yet the potential allure of this garden for the Canadian-Chinese diaspora seems, to me, a vital aspect to take into account when judging the success of this specific instance of Chinese soft power.

From an aesthetic point of view, the Sun Yat-Sen garden is certainly a success. This is a feat that is not easily achieved with Chinese-style gardens, as a proper and traditional layout is both costly and difficult to achieve. For this reason, most gardens built outside China are complete or partial reproductions, or loosely inspired by existing examples. A great emphasis is placed on taking models from the Suzhou gardens listed in the UNESCO world heritage list, alongside claims that such-and-such gardens are ‘Ming-style’. Yet Suzhou gardens have not crossed the centuries unscathed. As much as any other garden in China, they have been destroyed and remodelled heavily, especially during the 20th century. Interestingly, the focus on Suzhou gardens is rarely disputed, although Yangzhou was arguably a bigger garden centre than Suzhou during the Qing (Manchu) dynasty. China’s effort to present so-called ‘classical’ Suzhou gardens as an idealised vision of elegant imperial China (especially Ming as opposed to Qing) rather than the problematic Yuanmingyuan or other Imperial gardens of the Manchu dynasty is understandable. Still, I would argue that it could be analysed as an attempt to homogenise Chinese culture, rather than presenting “its diverse reality, that was dominant nationally and was being exported internationally”[7]. Gardens representative of other parts of China have also been built abroad, notably in the context of city sistership. Yet these are still much less discussed or appreciated than their Suzhou-style counterparts, even in China. One such example is the Guangzhou-style garden built in Munich (Germany) as part of the International Garden Expo in 1983, an exact copy of the 1981 Fanghuayuan in the Orchid Garden (Guangzhou).

To conclude, landscape diplomacy seems to allow for a relatively subtle reconstruction of a country’s identity than more brash areas of ‘soft power’ such as the Confucius Institutes. Whether Chinese-style gardens built abroad are a kind of ‘soft power’ is debatable. However, it is certainly worth noticing that those are not always targeted at capitals of G20 nations: I would suggest that gestures like the Jamaican Chinese garden and their local reception need more looking into.

Josepha Richard is a PhD candidate researching 19th century gardens in Guangzhou at the University of Sheffield, UK; her supervisors are Jan Woudstra and Alison Hardie. She was a Summer Fellow at Dumbarton Oaks (Washington D.C.) in 2015; and gives the Chinese gardens lecture for the Postgraduate Diploma in Asian Art at SOAS, London. Image credit: CC by Taryn/flickr.

[3] See Clunas, Craig. “Nature and Ideology in Western Descriptions of the Chinese Garden.” Dumbarton Oaks Colloquium on the History of Landscape Architecture XVIII, 1997, 21–33.

[4] As understood as Western Europe and North America.

Tianxia: Imperial Ambition or Cosmopolitanism?
How new is the ‘Belt and Road’?