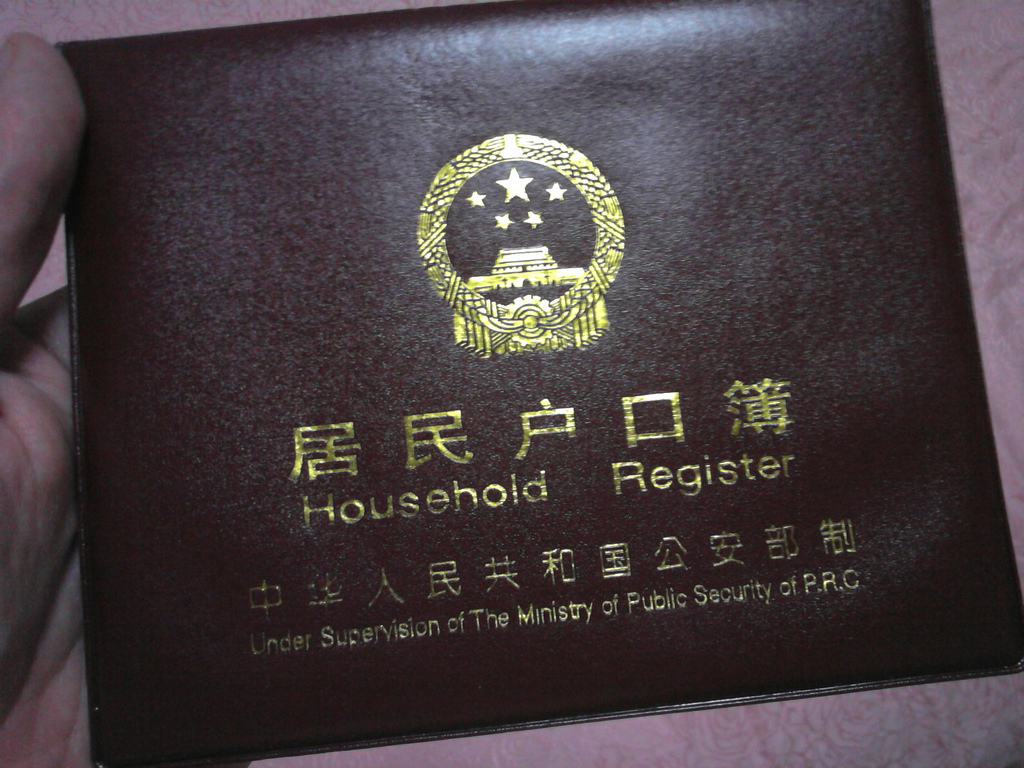 One distinguishing characteristic of life for Chinese citizens has been China’s long-antiquated hukou, or household registration system, which for decades classified people as urban (non-agricultural) or rural (agricultural) and outsider/insider according to where they were born, not where they reside. Begun in the 1950s as a way for the government to distribute resources from the centrally planned economy and to limit population mobility to prevent overcrowding in cities, in the reform era the policy has come under intense criticism from scholars, human rights activists, and the rural-to-urban migrant population due to the way it has created a two-tiered, caste-like system. In China’s cities, those who hold a local urban hukou are entitled to a range of state welfare benefits (in the form of housing, education, healthcare, etc.) while those who do not must go without. The original purpose of the hukou has become obsolete, yet it nonetheless has held much power in determining people’s life opportunities. Moreover, the structural barriers it upholds are indisputably connected to the cultural prejudices faced by “outsiders,” particularly labor migrants in cities such as Beijing.

As I summarize in my book, Technomobility in China: Young Migrant Women and Mobile Phones, in the last two decades or so, multiple attempts have been made at reforming China’s hukou policy. In small towns and cities, these policies have made some headway toward creating a more equitable, though not perfect, distribution of resources. However, in line with China’s market emphasis, quite often these reforms have served to commodify hukou, especially in large cities and megacities. An example is the so-called “blue seal” hukou, established in the early 2000s, which allowed “talented” (educated/wealthy) people to purchase an urban hukou. In 2005 further attempts were made to reform the household registration system by doing away with the agricultural/non-agricultural distinction and replacing it with a “nationally uniform household registration system” that would only distinguish between permanent versus temporary hukou (or local versus non-local). Such changes were initially seen as progressive, but it later became apparent that they were superficial and did not benefit peasant farmers and labor migrants. After 2005, every couple of years more pronouncements on hukou reform followed, with little radical reform.

In 2013, hukou reform was again a topic when it was announced that several central government ministries had been working on guidelines for hukou reform with the goal of establishing a new unified system by 2020. Education, housing, healthcare, and other social services would be given to “qualified” urban and rural residents and differing policies would apply depending on the size of the locale – town, city (small, mid-level, and large), and megacities. In 2014, more formal announcements regarding hukou reform were made, coinciding with the government’s newly announced urbanization plan, which focused on “human-centered” urbanization and moving more rural residents into towns and cities. In all of these efforts, reforms in towns and small and mid-level cities were seen as easier to implement than in big cities. Nonetheless, megacities like Shanghai and Guangzhou did adopt a system whereby people were allocated points based on education, home ownership, payment of taxes over a certain number of years, etc. However, even though a minimum number of points was needed, the local governments still set quotas. According to one report, only 26,000 of 300,000 qualified migrants obtained a local hukou in Shanghai by the end of 2015.

The aforementioned reforms now bring us to Beijing, seen by many as the last holdout of reform given its status as the capital and the government’s desire to control the city’s population growth. An announcement at the end of 2015 put forward a proposal to reform Beijing’s household registration system with policies similar to those in Shanghai and Guangzhou (differences included that applicants could be no older than 45 years of age; this was later deleted due to its discriminatory nature). Throughout 2016 more reports followed on hukou reform in Beijing. Then, in mid-September it was announced that Beijing would get rid of its urban-rural distinction altogether. One might think that such an announcement would invite attention and analysis, but this was not the case. The news was issued through a few government media outlets and it got little attention on Sina Weibo. On my WeChat it was entirely absent. Outside China there was some coverage in papers based in Asia, such as the Straits Times of Singapore and the South China Morning Post out of Hong Kong. This lack of attention might be because no concrete policies were announced. It could also be because that in doing away with the urban/rural distinction and basing eligibility for points on education, employment status, amount of taxes paid, and credit history, among other things, the policy follows in the footsteps of previous reform efforts and announcements.

As many have written, changing the name of the type of hukou or abolishing the urban/rural distinction will not diminish the deep prejudices against migrant workers without other institutional reforms. In general, particularly in large and more prestigious cities, hukou reform has mainly privileged the wealthy and educated, while the vast majority of migrant workers in low-wage, unskilled jobs remain excluded. Furthermore, rural residents could be hurt by such policies if they lose the rights to their land.

If the Chinese government is sincere in its assertion that hukou reform is being undertaken to ensure more “people-centered” development and urbanization, then perhaps one of the best ways of gauging the success of such efforts is by ascertaining how those who have been the most discriminated against by the hukou policy have been affected by and understand these reforms. In my decade of doing research among labor migrants in the low-level service sector in Beijing the answer seems to be very little. Dozens of young women I have met who work in shops, restaurants, and beauty salons have little awareness of these policies. Many middle-aged female domestic workers and male construction workers are in a similar position. When the most recent policies regarding Beijing’s hukou were announced, I used WeChat to conduct an informal survey among the migrant workers I know in Beijing. None of them had heard of this or other recent announcements. When I asked colleagues who work as advocates for migrant workers, their response was rather cool. One said, “Such high-level policies have the result of still keeping out outsiders, especially migrant workers.” Another replied that it was too early to know anything about it, but one shouldn’t have high hopes for significant change. However, these advocates for migrant workers’ rights continue their push to make migrant workers’ lives visible and more equitable, which perhaps offers the most hope for long-term change.

Cara Willis is an Associate Professor at Texas A&M University and a multidisciplinary scholar whose work has focused predominantly on mobile communication technology, gender and on China studies. Her most recent publication in 2015 was titled ‘Gender and China’s Online Censorship Protest Culture’. Image credit: CC by Micah Sittig/flickr.

How new is the ‘Belt and Road’?
OBOR and the Marshall Plan.