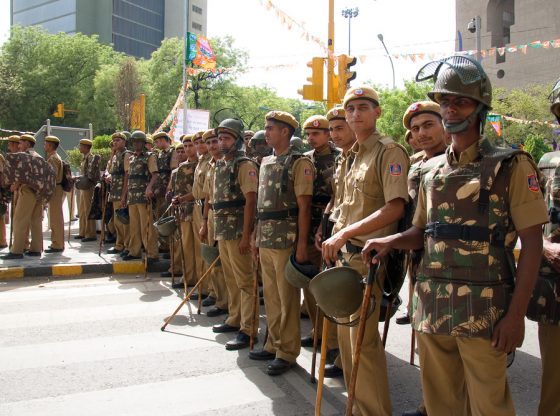 When Narendra Modi was elected as head of India’s BJP government in May 2014, he was expected to usher in a period of stability and development. But midway into his term, he and his party are lurching from one crisis to another – and the atmosphere is getting worse.

When the government recently announced that it had attacked terrorists based in Pakistan to avenge the murder of Indian soldiers in the state of Jammu and Kashmir, it set off the latest in a series of unpleasant political rows. While functionaries of India’s ruling Bharatiya Janta Party (BJP) gloated, several opposition politicians not only questioned the truth of the government’s claims but also accused it of stirring up “war hysteria” ahead of 2017’s elections in key states.

The government’s attitude is belligerent, and the BJP is increasingly dependent on electoral manoeuvring. The casualty in all this is India’s increasingly beleaguered democracy, which is at risk of cracking under the pressure.

Nothing better illustrates this than the proliferation of “cow protection vigilantes” across the north and west of the country. Various people accused of slaughtering bovines or eating beef have been harassed, humiliated, beaten and even killed since 2015. Most of the victims were from Muslim or Dalit communities, both of which depend on cows for their livelihood and sometimes food.

The latest atrocity came to light in July 2016, when seven Dalit labourers who were carrying cattle carcasses in the village of Una were rounded up by cow protection vigilantes, stripped, dragged through the streets and thrashed with iron rods. In a telling measure of the impunity they enjoy, some of the vigilantes filmed the entire episode and uploaded it on social media as a warning to all those who slaughter cows and eat their meat.

As the chilling video went viral, Dalits across the state of Gujarat responded with unprecedented protests, culminating in an assembly of over 20,000 people in Una on India’s 69th Independence Day. Gujarat’s chief minister was ultimately forced to resign.

The cow protection vigilantes have once again inflamed India’s ancient caste hatreds, pitting the self-styled “high castes” against those stigmatised as “low caste” and “untouchable”. Complementing such vigilantism are Hindutva-affiliated student organisations, such as the Akhil Bharatiya Vidyarthi Parishad (ABVP), who are taking the battle to India’s university campuses.

In 2015, high caste ABVP students at the University of Hyderabad complained about a Dalit student at the university, Rohith Vemula, who regularly organised readings and seminars on social justice and human rights. He was involved in a campus beef festival and funeral prayers for a terrorist convicted of the Bombay blasts of 1993. His activities got him suspended from the university along with three other Dalit students, and he eventually killed himself in January 2016.

In response, 14 student unions launched joint protests against the university administration and the ABVP, and soon, India was convulsed with student protests the like of which it has not seen since the so-called Mandal protests of 1990.

Along with pursuing the cow protection agenda and campaigning to safeguard caste privilege, Hindutva ideologues have made no secret of their disdain for affirmative action. To keep the issue from coming to a head, Modi’s government has successfully stalled demands to release data on India’s caste census.

It’s widely assumed that if those data were published, they would confirm what most Indians already believe: that the best jobs, assets and other productive resources are controlled by a tiny fraction of the population, namely members of the self-styled “high castes”.

Exposing the reality of the situation is a crucial prerequisite for truly inclusive growth. But if it made such data public, the BJP government would almost certainly infuriate its core constituency of “high caste” middle-class urban Hindus – and that puts the party in a dangerous electoral bind.

From bad to worse

The perception that the BJP is committed to preserving “high caste” privilege bears down on the party’s prospects in three crucial states that will go to polls in 2017: Gujarat, Punjab and Uttar Pradesh. Taken together, Dalits and Muslims make up a significant share of the population in all three states, and the violence directed at both communities is driving them towards a new alliance – ending two decades of social hostility carefully nurtured by the BJP.

Ms Mayawati, three-time chief minister of Uttar Pradesh and one of the country’s most recognisable Dalit leaders, has advised Dalits to form joint fronts with Muslims so as to contain the Hindu nationalist parties. Dalit organisers of the Gujarat protests consciously sought to reach out to and include Muslims, while joint Dalit-Muslim-Sikh efforts recently thwarted attempts by Hindutva activists to assault a mosque in a sleepy Punjab town.

As these minorities join forces, and with a general electorate angry at slow job growth and the rising prices of key staples, the BJP may well be facing some galling electoral losses in these three crucial states.

Modi’s increasingly hawkish position on Pakistan is a bid to drum up war hysteria on the eve of crucial provincial elections. As protests against the BJP regime mount, and as opposition parties find some semblance of organisation independent of the leadership of the moribund Congress Party, Modi hopes to bolster his party’s prospects by taking recourse to nationalism, jingoism and warmongering. It all adds up to a stifling atmosphere of mutual antagonism, with government ministers and sympathetic journalists regularly accusing their opponents of sedition.

Four decades ago, another Indian prime minister, Indira Gandhi, was faced with similar political opposition to her once-popular regime. She responded by declaring a state of emergency that effectively suspended democracy. The war hysteria Modi and his government are drumming up are all too reminiscent of that era; the consequences could be catastrophic.

Indrajit Roy is an ESRC Research Fellow at the Department of International Development, University of Oxford. This article was first published on The Conversation and can be found here. Image credit: CC by Jaskirat Singh/Flickr.

Made in China 2025
Dynamic authoritarian resilience