The Riddle of Hung’s ‘Peace Platform’ with China 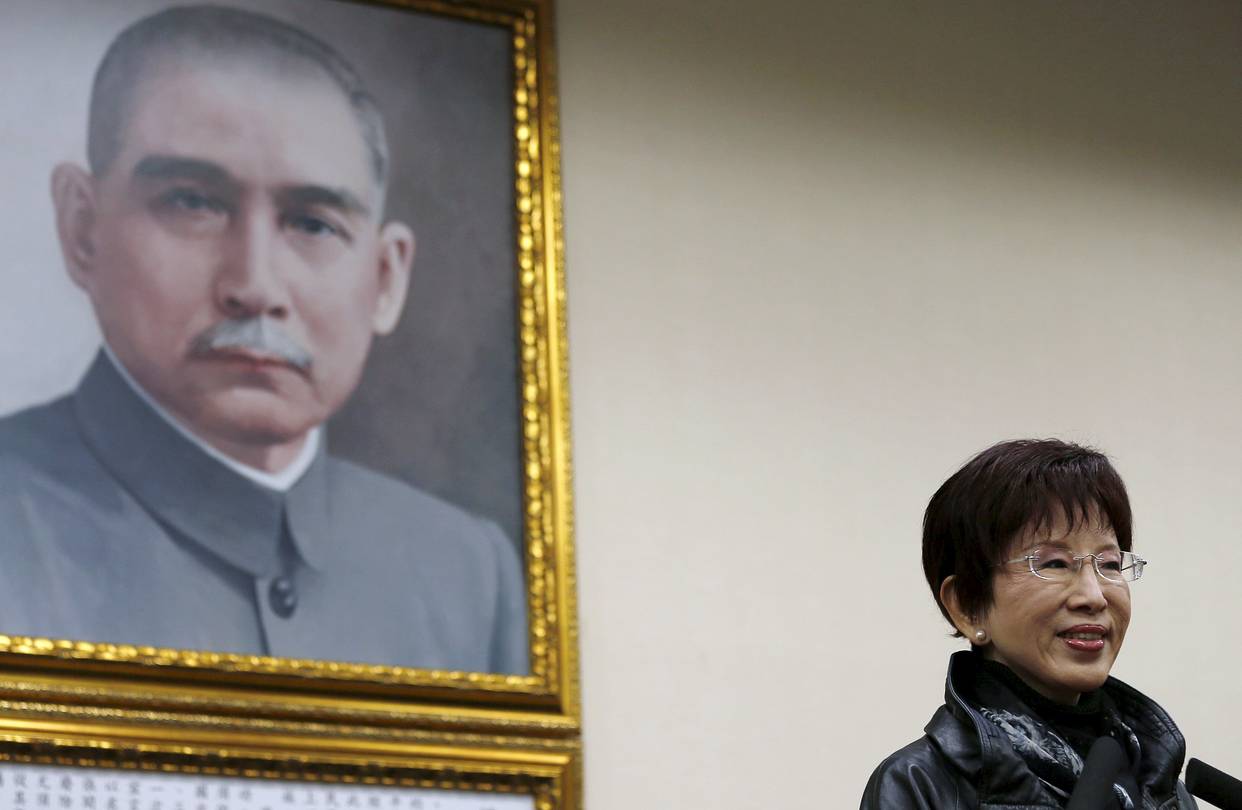 Kuomintang Chairperson Hung Hsiu-chu (洪秀柱) arrived in China this week for a series of meetings and a cross-party forum, causing divisions within her party and apprehensions across Taiwan that the Beijing-friendly politician may seek to sign a “peace treaty” with China.

Hung, whom the KMT leadership pushed aside as the party’s presidential candidate at the eleventh hour in late 2015 due in large part to the unpopularity of her cross-strait policies, has been accused of manipulating the KMT’s new policy platform, adopted on Sept. 4, which while reinforcing the so-called “1992 consensus” failed to incorporate longstanding references to each side interpreting differently what “one China” means.

Many critics, including members of her party, have suggested that Hung elided references to different interpretations to please Beijing and Chinese President and Chinese Communist Party (CCP) Chairman Xi Jinping (習近平), whom she met in Beijing on Tuesday. Her detractors also expect Hung to avoid mentioning the qualifier in Xi’s presence and thereby acquiesce to a “one China, same interpretation” framework.

On Wednesday and Thursday, Hung’s 140-member delegation will take part in the annual KMT-CCP forum, which this year has been repackaged as the Cross-Strait Peace Development Forum from the more neutral Cross-Strait Economic, Trade and Culture Forum name used since 2006, one year after the “ice breaking” visit to Beijing by former KMT chairman Lien Chan (連戰).

The insistence on “peace” has also led to speculation—and fears in some KMT circles, where Hung going rogue is seen as potentially damaging the party—that Hung could propose the signing of a “peace treaty” with China during her visit.

There is very little that Hung can do as party chairperson in terms of signing a pact with China. The Act Governing Relations Between the People of the Taiwan Area and the Mainland Area clearly stipulates that only the government has the authority to sign or enact agreements with other countries.

Still, Hung could nevertheless decide to proceed with some form of peace agreement not for recognition as an official and binding document, but rather as a new basis for cross-strait relations, much as the “1992 consensus,” a construct that eventually took on a life of its own by dint of the KMT and the CCP’s insistence on its validity, has become a government-to-government matter and object of contention with the current Democratic Progressive Party (DPP) administration, which refuses to acknowledge its existence. In a classic sediment-accumulation strategy, by signing some document to that effect, Hung and the CCP could conceivably create new facts on the ground which would be difficult for the KMT to undo in future as the CCP could then make it a precondition for continued talks (pity the KMT chairman who has to contact Beijing and inform it of his or her intention to pull out of an earlier “agreement”).

In other words, while she has no authority to sign a peace accord with China, and despite opposition within her own party to such a pact—especially one that presumably would make no mention of “different interpretations”—Hung could lock her party in and force her successor to embrace the spirit of the document if only for the sole purpose of maintaining relations with the CCP, one area where it continues to have a political advantage over the DPP.

There are indications that the KMT may be preparing the terrain for such a move. Earlier this week, the KMT unveiled the results of an opinion poll conducted on its behalf by “a private polling center” which it claims shows that more than half (51.5%) of the 1,078 respondents interviewed in Taiwan Aug. 18-29 support a “peace-centered policy platform” on the basis of the Republic of China constitution and putting an end to hostilities by “actively exploring” the possibility of a “peace accord.” The party claims that another poll, conducted over telephone with an incredible 600,000 people in Taiwan between Oct. 21 and Oct. 25 (that’s 100,000 respondents per day) yielded similar results (51.7%). Setting aside the framing of the poll questions (after all, who opposes peace?), the KMT now claims, against all evidence to the contrary amid a deepening anti-China sentiment and steady rise in Taiwanese self-identification, that its “peace platform” represents “mainstream opinion” in Taiwan. Indicatively, when running for re-election in the 2012 elections, then president Ma Ying-jeou (馬英九) of the KMT—who in recent weeks has had fierce battles with Hung over “one China”—briefly floated the idea of a peace accord with China, only to shelve it after public opinion made it clear it did not approve.

Whatever Chairperson Hung has in mind probably isn’t illegal and does not constitute grounds to prosecute her for treason, but if she presses ahead with a peace “agreement” with the CCP and does so even against a consensus within her party, she could help Beijing create new facts on the ground and establish new rules for future cross-strait engagement that further constrain Taiwan’s room to maneuver.

Michael Cole is a Taipei-based senior fellow with the China Policy Institute, University of Nottingham, and an associate researcher with the French Center for Research on Contemporary China.