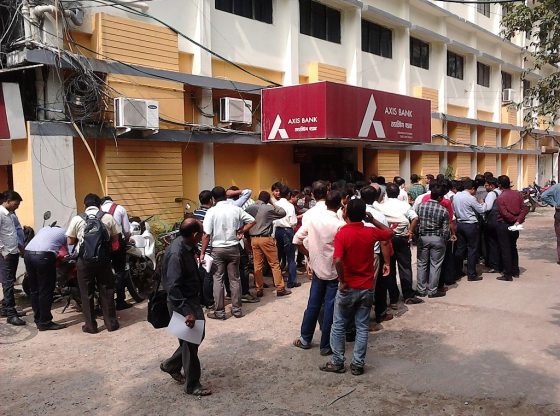 The decision, targeted at people hoarding black money, had to be executed swiftly to stop people using the money to buy other assets.

RS500 and RS1,000 notes together account for more than 85% of the total value of bank notes in circulation in India, and all of this, with the exception black money, will now be returned to the formal banking system.

This will serve many purposes, including reducing unaccounted money, reducing the cash-carry economy and encouraging more electronic transactions.

The move will also strengthen the deposit base of banks substantially. Many of India’s banks are struggling for capital due to high levels of bad loans. The deposits of large pools of high-value denominated cash will ultimately help the banks to lend more.

The public can exchange the outdated bills until December 30, which will likely increase the demand for statutory liquidity requirements at the banks. This will increase demand for government securities and cause a fall in bond yields. The higher deposit base may result in a decline in interest rates, thereby promoting enhanced investment and growth in the long-run.

Cash and carry transactions make up 12% of India’s GDP, much higher than its peers. High value currencies help the hoarding of black money, tax avoidance and terrorism funding. They also enable a parallel economy which is difficult to control and where policies are less than effective.

The government’s plan to promote the non-cash payment system will lead to better monitoring, regulating and policy effectiveness. It may enable the government to widen the tax base, help cleanse electoral politics (where campaigns are often funded with cash), and control Hawala transactions. Scrapping high-value notes will also increase the possibility of detecting and controlling corruption.

The currency switch is one of a number of steps taken by the Modi government to crack down on corruption and tax avoidance.

The government has already set up a special investigation team on black money, and in the 2016-17 Union Budget it offered those with undisclosed income and assets located in India a tax amnesty. A tax rate of 45% was levied on assets declared under the scheme. Almost US$10 billion of undisclosed assets were declared, according to the tax department, which could net the government US$4.5 billion in tax revenue.

But the best way to reduce corruption and black money in the economy is to move from an informal economy predominantly dependent on cash, to electronic transfers. This will require universal banking accessibility.

The Government launched the Jan Dhan Yojana (People Money Scheme) in 2014 aimed at boosting financial inclusion, and nearly 220 million accounts had been opened by April 20, 2016.

But the success of the government’s move to target the black economy will depend on how effectively government counters the inconvenience faced by people and groups that solely depend on the cash and carry economy. Already there are reports of Indians queuing for hours, not only to deposit their expired notes but also just to withdraw cash at ATMs.

Meanwhile, it’s estimated only 10-15% of the population has ever used any kind of non-cash payment instrument, compared to 40% of people in countries like Brazil and China. Increasing the horizon of non-cash users along with convenient, reliable, secure, and affordable payment systems will have implications for access to other financial services such as loans and insurance to the unbanked, particularly in the wake of financial inclusion initiatives.

The challenge will be to strengthen the digital infrastructure of banks and vendors failing, both of which are likely to see the threat of cyber-related theft increase.

Even though the government has made efforts to ensure all rural citizens have a bank account through the Jan Dhan Yojana, many people in rural areas are still without accounts.

Migrant workers, landless workers, potters, contract labourers, street vendors, rickshaw pullers, female workers, housewives, and others all generally keep money stashed at their homes. These people will be forced to spend time and resources to get their money converted into currency notes of valid denominations. This move will cause a severe cash crunch for both customers and sellers. This could lead to slowdown in business for a few weeks. The small artisans and street vendors who deal only in small cash transactions will have a tough time.

The jewellery market and other luxury consumer sectors will also be affected in the short term as cash based transactions slow down.

Some of the other sectors which heavily depend on high value cash transactions including unaccounted black money are trade, mining, transport, hotels & restaurants and some luxury consumer goods sectors.

Ultimately, all this inconvenience is short term and in due course the Indian economy will adapt itself to these changes, curbing the growth of India’s black economy.

Pravakar Sahoo is an Associate Professor, Institute of Economic Growth, and Visiting Fellow, Bruegel, University of Delhi. This is article was first published on The Conversation and can be found here. Image credit: Wikipedia Commons.