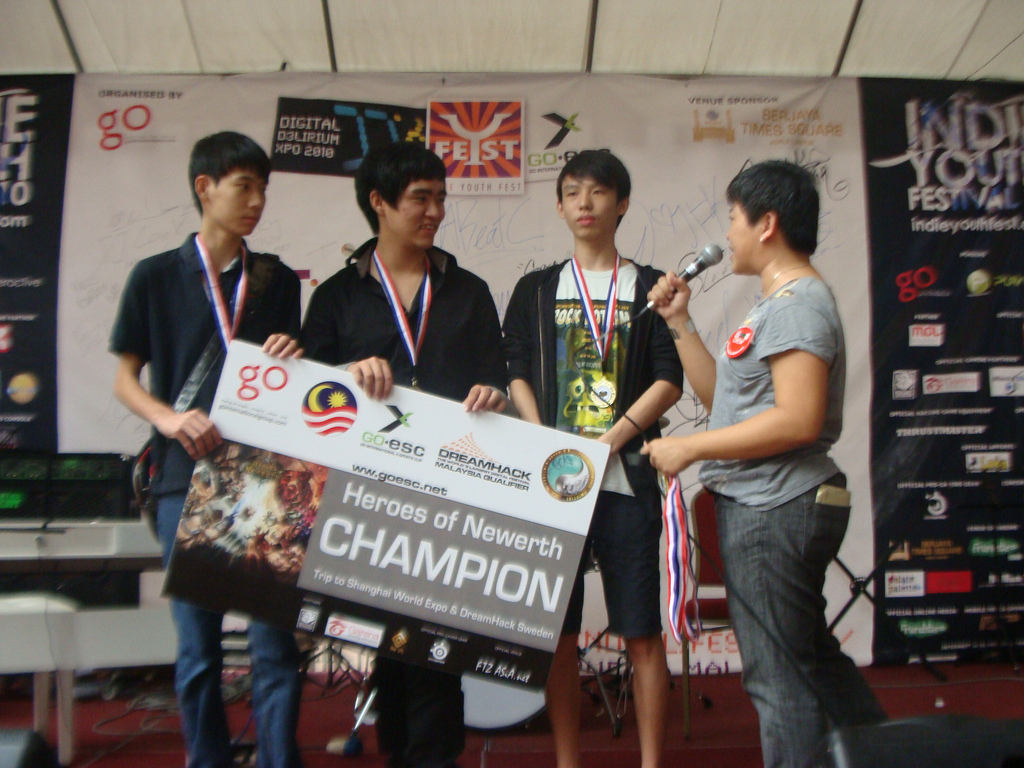 E-sports refers to competitive tournaments of video games among mainly professional gamers. A 2015 research report produced by games market research company Newzoo and global sports market analytics firm Repucom shows that worldwide e-sports market revenue reached US$194 million in 2014 and is predicted to reach US$465 million in 2017. Competitive gaming has grown into a popular spectator sport with a fan base comparable to that of mid-tier traditional sports such as volleyball and swimming.
Initially, competitive gaming was most popular in North America and Western Europe. When the e-sports industry began to take off in the late 1990s, China joined the club and soon became a major player. In the early years, competitive gaming was regarded by most Chinese gamers as a hobby, a leisure activity, a social media platform and a new lifestyle choice in the era of information technology. From the late 1990s, profit-driven companies such as video game websites, PC newspapers, and computer hardware/software vendors began to organize and sponsor video game competitions across the country, which facilitated the emergence of China’s first generation of professional and semi-professional gamers.

The Chinese government took a supportive stance toward e-sports, hoping to take this opportunity to facilitate the development of the IT industry and boost the economy. In 2003, the Sports Ministry listed e-sports as one of 99 officially recognized sports. In 2004, the First China E-sports Games (CEG) were launched by the Sports Ministry and the All China Sports Federation. After more than 15 years of rapid development, competitive gaming has gained general acceptance. E-sports events are organised across the country on a regular basis. Domestic league matches are watched on the Internet and on television by millions of gaming fans. Top players have become national figures. In 2008, celebrity Warcraft III player Zhang Xiangling was selected as a torchbearer for the Beijing Olympic Games as a representative of e-sports. In March 2013, a national e-sports team was established by the Sports Ministry. By 2016, with a total annual revenue of US$22.23 billion, China had overtaken the USA as the world’s largest e-sports market. There are now over 100 million e-sports fans in China.

The past decade has seen the commercialization and professionalization of competitive gaming. ‘E-sports’ has become a new concept that gaming companies, PC hardware vendors, video game publishers and online streaming platforms are eager to sell to gaming fans. The objective is to attract more young people in the ever-expanding gaming industry. Both domestic and foreign gaming companies like Perfect World, Blizzard and Riot Games are investing heavily in China to recruit new players and viewers. While leading gaming companies, live streaming services and online gaming platforms are making millions of dollars of profits from young e-sports audiences and participants, who put countless time, money and effort into online gaming, the booming e-sports culture has contributed to the formation of a vast cohort of gaming addicts in China. Parents, educationists and doctors have expressed growing concern over the social and health costs of the e-sports industry. Many question the sustainability of the e-sports industry.

Professional gaming offers new opportunities for young players who dream of becoming superstars, earning millions in prize money at international competitions. However, aiming to become a professional player seems to be a pricey gamble. The professional e-sports world operates in a pyramid structure, with its base formed by millions of gamers who are willing to devote their time and money to pursuing the dream of e-sports success. The reality is that, more than 90 per cent of the professional and semi-professional players would remain at the bottom of the pyramid, earning small salaries. The average career lifecycle of professional e-sports players is three to five years, which is significantly shorter than in traditional sports. Most of the pro players are between 16 and 23 years old. After bidding farewell to their e-sports dreams at a young age, they soon find out that the knowledge and skills they have learned during their e-sports careers are of little help in securing a new job. At the same time, the e-sports world has also closed its door behind them because e-sports streaming service companies and game software developers only want star players.

A study conducted by the Chinese Academy of Social Sciences in 2010 revealed the increasing number of problems associated with Internet gaming. It pointed out that nearly 50 per cent of young Chinese people use the Internet just to play games. Internet gaming addiction started attracting the attention of the general public when an increasing number of deaths began to occur in Internet cafes. In 2012, a 23–year-old man was found dead in an Internet cafe after a marathon 23-hour gaming binge. In 2015, 24-year-old gamer Wu Tai collapsed and died in an Internet cafe in Shanghai. Internet gaming addiction-related violence and crimes are also on the rise. A 2010 survey conducted by the China Youth Association for Network Development showed that gaming addiction has become an significant factor in juvenile crimes such as theft, burglary and robbery. In December 2013, a 15-year-old secondary school student was stabbed to death by a 14-year-old boy in a Internet cafe in Dandong. The 14-year-old confessed that he could not control his anger when the victim had laughed at his poor gaming skills. In February 2015, a 60-year-old taxi driver in Danyang was robbed and killed by two 14-year-old teenagers. The money was used to feed their Internet gaming habit. The staggering fact is that similar tragedies and crimes happen nearly every month in China.

In response to the worrying situation of the ever-growing number of young Internet gaming addicts, an increasing number of clinics and military-style boot camps have been set up across China to tackle the issue. This initiative has been supported by many desperate parents. As early as 2007, the country’s psychologists had also launched initiatives to classify Internet gaming addiction as a mental disorder which leads to problems and symptoms including irritability, anxiety, depression and anger disorders. Although Internet gaming addiction has not been officially recognized by the Ministry of Health as a medical disease, regulations were passed by the Chinese government to limit the time teens can spend playing online games and bar under-18s from Internet cafes except on public holidays. China, like South Korea, Japan and the USA, is now recognizing gaming addiction as an public health matter. The academia, media and the general public are becoming more cautious about the development of the e-sports industry, which mostly targets the vulnerable group made up of the country’s children, teens and young adults.

Lu Zhouxiang is a lecturer in Chinese Studies in the School of Modern Languages, Literature and Cultures at National University of Ireland Maynooth. His main research interests are modern Chinese history, nationalism and China’s sport policy and practice. Image credit: CC by gointernationalgroup.com photo gallery/flickr.

A Taiwan Defense Blueprint for the Trump Era
Open Government in China: Bound to Improve, Within Bounds.