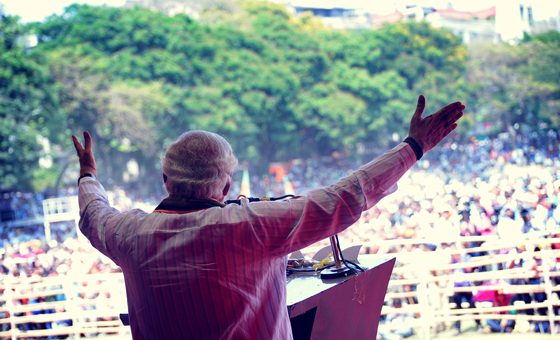 More than fifty days in, the government’s demonetisation manoeuvre has been pitched as many things: An assault on black money, a blow to counterfeiters, a nudge towards a cashless society. Of these, it is the move’s anti-corruption potential that has captured the public’s imagination. This is why the prime minister, in his New Year’s Eve address, likened demonetisation to a “historic rite of purification”, intended to relieve Indian society of the “suffocation” wrought by endemic malfeasance. Ordinary Indians seem to agree; citizens queuing outside banks have expressed a willingness to make a personal sacrifice if the corrupt are getting squeezed.

It is arguably the worst kept secret in the country that dirty money in politics is the glue that holds the corruption edifice together. Indeed, both friends and foes of demonetisation agree that the anti-corruption content of the radical measure turns substantially on whether the pocketbooks of parties and politicians receive fresh scrutiny. Perhaps because of these fundamental truths, rumours began to fly that Modi would use his year-end address to issue concrete proposals to tackle the perennial bugbear of political finance.

To date, the government has resisted decisive action on this front. Just weeks ago, the finance minister flatly stated that “there is not a single change that has been brought about, nor is any change at the moment contemplated” insofar as the laws governing political finance are concerned. Sadly, the prime minister did little to shake the impression of a government hamstrung by the past on this issue. When the time came for Modi to discuss the subject towards the end of his oration, he demurred. Other than reiterating his call for a debate on the idea of simultaneous elections, the PM simply urged political parties to drop their “holier than thou approach”, and to take undefined “steps to free politics of black money”.

The reluctance of the government to put forth a concrete plan of action perpetuates the impression that there is one set of rules for the public and another set of rules for those who make the rules. So the question arises: What measures should the ruling party consider in 2017 if it wants to replicate the shock and awe of demonetisation when it comes to political finance?

First, the government should move to end cash donations to political parties, plain and simple. If the corner shopkeeper and the neighbourhood sabziwala can process digital payments, so can the political karyakarta.

Second, parties currently face no obligation to disclose the sources of contributions below Rs 20,000. The oldest trick in the book is for donors to break up their offerings into bite-sized chunks, thereby obscuring their fingerprints. There is a good reason why as much as 70 per cent of the total income declared by national parties in the last two fiscal years comes from such undocumented sources. The Election Commission of India (ECI) has recently proposed that the Representation of the People Act (RPA), the foundational law governing electoral life, be amended such that declarations will be required for donations above Rs 2,000.

But why stop there? Lest we repeat the mistakes of failed past policies, there should be total transparency for every paisa of political giving. As Odisha MP Baijayant Panda has suggested, the tax benefits parties enjoy could be limited to above-board funds.

Third, when it comes to heightened scrutiny of party finances, many government backers have said no new action is needed because parties’ books are already subject to audit by a chartered accountant (CA). However, politicians themselves privately intimate that this is hardly a check; a party can get a handpicked CA to certify whatever it wants with relative ease. In 2014, the ECI teamed up with the Institute of Chartered Accountants of India to create guidelines for the maintenance of party accounts. While this is a positive step, the impact of suggestive guidelines is necessarily limited. Instead, these rules need to be made mandatory and enforced by a third-party auditor.

And to give any new regulations teeth, the government should amend Section 29A of the RPA to explicitly empower the ECI to deregister parties that flout the new regime. As it is, the ECI recently disclosed that India has more than 1,900 registered parties but only 400 have contested elections in recent years. Most are, quite possibly, “shell parties” operating as tax havens.

Finally, under existing laws, candidates have to file affidavits disclosing their personal assets and liabilities at the time of nomination and expenditure statements within 30 days of an election. However, the law does not explicitly enable the ECI to impose real costs on those who file false or misleading disclosures. Without the credible threat of punishment, what happens next is no surprise. The fix is simple: Amend Section 125A of the RPA to enact severe penalties on those who obfuscate. Demonetisation, on the heels of the surgical strikes, dispelled the notion that the prime minister is wedded to incrementalism. When sufficiently passionate about the underlying policy in question, Modi has proven that he can be a gambler.

While we will continue to debate the merits of demonetisation, the government has repeatedly signalled it will stay the course. The question is: Will it eventually summon the same fortitude when it comes to closing the loopholes from which political actors derive undue benefit? Fresh moves aimed at the political class will inevitably create disruption, including for the ruling party, but it will engender massive popular support. It will show the entire country that no one is truly immune from the cleansing. The ball is in the government’s court.

Milan Vaishnav is a Senior Fellow at the South Asia Program Carnegie Endowment for International Peace. This article was originally published in the Indian Express available here and can also be found on as part of the Carnegie Endowment for International Peace’s South Asia program available here. Image credit: CC by Narendra Modi/Flickr.