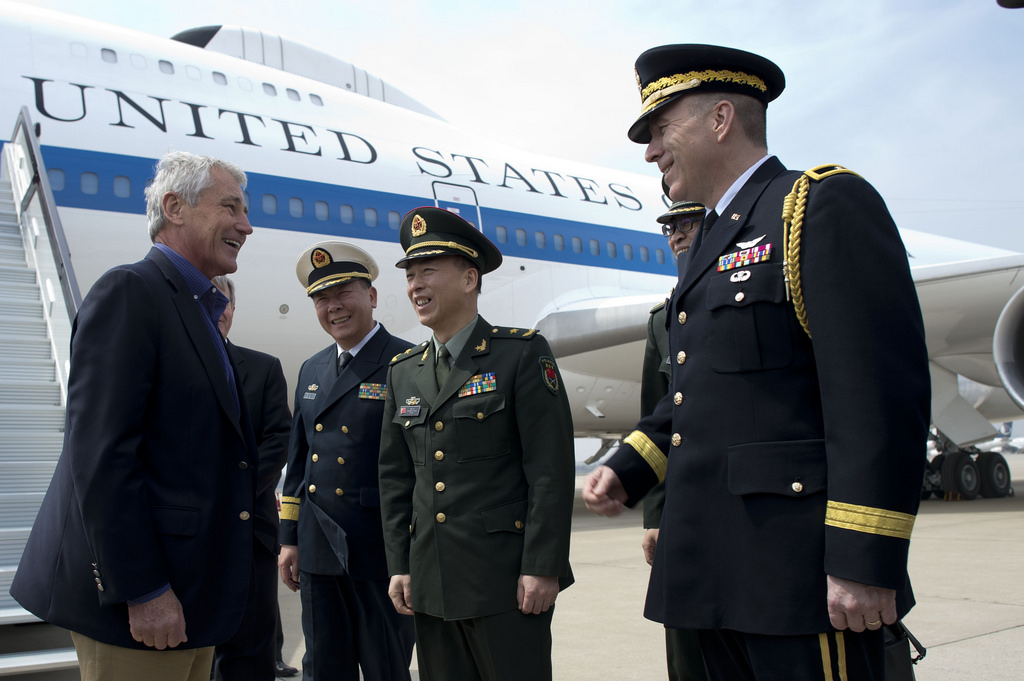 Bilateral relations between China and the U.S. encompass multiple issues including human rights, space power, trade relations, currency manipulation, cyber power, China’s increasing military assertiveness in the East and South China Seas, Beijing’s desire to implement this assertiveness through international legal forums and its economic assistance to other countries, and its desire to get other countries to submit to its desire to restrict international support for Taiwan.

This desire to impose its will on Taiwan and let the international community know of its intentions was vividly expressed when China sent its Liaoning aircraft carrier into the Taiwan Strait.  Taipei responded to this action by scrambling F-16 fighter jets and a deploying a frigate into these waters.Such action may be a response to Beijing’s displeasure with the U.S. due to incoming President Trump’s accepting a congratulatory phone call from Taiwanese President Tsai Ing-Wen which appeared to violate the purported one-China policy the U.S. has adhered to since it established formal diplomatic relations with China in 1979 while ostensibly breaking such relations with Taiwan.

Such action may be a response to Beijing’s displeasure with the U.S. due to incoming President Trump’s accepting a congratulatory phone call from Taiwanese President Tsai Ing-wen which appeared to violate the purported one-China policy the U.S. has adhered to since it established formal diplomatic relations with China in 1979 while ostensibly breaking such relations with Taiwan.

Nevertheless, the U.S. and Taiwan retain robust unofficial diplomatic relations and Washington periodically sells Taiwan military weapons to enable it to defend its sovereignty. It is possible that as part of its desire to change traditional U.S. foreign policy and reassert its military power, the Trump Administration may consider taking a more proactive stance in favour of Taiwan.  Other countries in the region, including Japan and South Korea, are concerned with China’s growing military assertiveness. A possible tangible response to Beijing’s military muscle-flexing is the announcement by Senate Armed Services Committee Chair John McCain that the U.S. should increase military spending by $85 billion per year over the next five years, ending the 2011 sequestration budget deal which has constricted defense spending, and devoting this increased defense spending to more fighter aircraft, increasing the number of Navy ships, and enhancing Air Force and Marine Corps personnel which would be highly relevant in any Western Pacific military contingencies. The Trump Administration’s forthcoming congressional budget proposal will also be a key indicator of how much a priority the Western Pacific will play in U.S. defence policy planning and resource allocation. Trump Administration national security strategy documents will also indicate whether the U.S. intends to expand, properly resource, and clarify the Obama Administration’s Asia-Pacific pivot.

Possible changes in U.S. policy priorities and spending toward China and the Western Pacific will be analysed, debated, and funded by other U.S. government agencies including congressional oversight committees and commissions.  One of these commissions is the U.S.-China Economic and Security Review Commission. USCC was established in Section 1238 of the 2001 National Defense Authorization Act. This law directed USCC to “monitor, investigate, and report to Congress on the national security implications of the bilateral trade and economic relationship between the United States and the People’s Republic of China.”  Commission membership consists of 12 members appointed by the Speaker of the House of Representatives and the Senate President Pro Tempore following consultations with each chamber’s majority and minority leaders and with the chairs of the House and Senate Armed Services and international trade oversight committees. Commission members serve two-year terms; are required to have expertise in U.S.-China national security matters; may be reappointed for additional terms of service; are provided with professional staff to carry out their responsibilities; each member has one vote; and the commission is required to submit annual classified and unclassified reports by March 1.

During Fiscal Year 2016 (October 1, 2015-September 30, 2016), USCC’s budget was $3.5 million and its members were supported by a professional staff of 18.  Commission members are listed on the commission website and during its tenure the commission has issued numerous annual reports documenting its work activities and containing policy recommendations as part of its congressionally mandated reporting requirements.  These annual reports have achieved relative bipartisan consensus with only five commissioners dissenting from overall report findings during the commission’s 15-year existence.  The commission also conducts hearings where it obtains information from congressional, independent, or executive agencies for gathering details about China-related agency activities, exposing operational failures, and proposing legislative revisions and recommendations enabling agencies to more effectively execute their policymaking responsibilities.

USCC, its professional staff, and contractors have also issued numerous studies documenting its work in multiple areas.  These include documentation of World Trade Organization (WTO) cases brought by the U.S. against China and by China against the U.S., analyses of Chinese investment in the U.S., a monthly Trade Bulletin detailing bilateral trade trends and developments involving these two countries, and analyses of foreign policy and international security developments involving these two countries and other Asia-Pacific countries on topics such as the July 12, 2016 international arbitration tribunal ruling in favor of the Philippines against China’s expansive South China Sea territorial and maritime claims, China’s Beidou satellite navigation system, Bejing’s efforts to counter the U.S. forward military presence in the Asia-Pacific, and many other topics.

China students and scholars should recognise USCC as an increasingly important source for Chinese and Western Pacific diplomatic, economic, political, and strategic policy analysis.  Its work products on this globally vital strategic reason can be constructively consulted by those seeking to evaluate Chinese economic and security policies, the reactions of the U.S. and other countries to Beijing’s policies, and the effectiveness or ineffectiveness of policy reactions by the U.S. and other countries toward Beijing. More information on USCC Western Pacific Strategic policy analysis can be found in the following article published in a forthcoming issue of Geopolitics, History, and International Relations.

Xi Jinping may be preaching trade, but China’s opening up has slowed
Of Chickens and Roosters