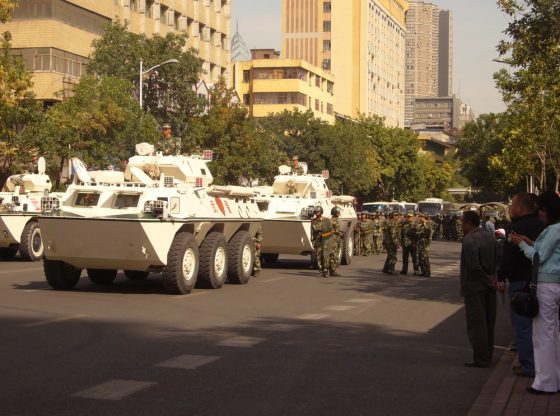 The correlation between regime type and the likelihood of terrorism has been a subject of scholarly attention for decades. One major stream of debate suggests that authoritarian regimes, unconstrained by civil society and democratic processes, make it harder for terrorist groups to organise and operate.

Another stream, however, building on the work of Ted Gurr holds that authoritarian regimes, while often holding tactical advantages in the pursuit of counter-terrorism via their willingness to deploy outright repression and overt instruments of political and social control, are in fact more likely to provide fertile conditions for terrorism. This is particularly the case in the context of multiethnic states where disadvantage of particular minorities – combined with state repression – provides motive and opportunity for the mobilization of political violence. In such contexts, terrorist organizations “as small organized actors led by elites that draw recruits from aggrieved subnational communities” can act as “instruments of mobilization that allow group grievances to be channelled into violent activity.”

The evolution of both Uyghur militancy and China’s efforts to combat it suggest the operation of this dynamic.

China’s approach to Uyghur militancy in the Xinjiang Uyghur Autonomous Region (XUAR) has not only been shaped by the authoritarian nature of the one-party state since 1949 but also by the region’s history as a liminal geographic zone. Xinjiang, as Owen Lattimore once famously argued, constituted the “marginal Inner Asian zone” of Chinese expansion that was more often than not ruled by polities other than those based in the Chinese heartland.

To overcome this marginality, the Chinese Communist Party (CCP) has pursued a muscular strategy of integration defined by tight political, social and cultural control (including via Han Chinese domination of the regional government, regulation of religion and outright suppression of dissent), and encouragement of Han Chinese settlement.

Over the past two decades this integrationist agenda has been augmented by a state-led economic modernization program designed to re-make Xinjiang into a major hub of trans-Eurasian economic connectivity. The core assumption has been that economic development and modernization will ultimately overcome Uyghur aspirations for greater political autonomy. This has been amplified under President Xi Jinping’s ambitious “One Belt, One Road” strategy which seeks to exploit Xinjiang’s “geographic advantages” to facilitate China’s “westward opening-up.”

Although yielding economic development, this strategy has stimulated opposition from the Uyghur population who bridle against demographic dilution, political marginalization and continued state interference in the practice of religion and impelled large numbers of Uyghurs to migrate, either legally or illegally, from China.

Significantly, incidences of terrorism have increased over the past two decades. Data compiled by Marc Julienne and Moritz Rudolf, for instance, showed that between 2010 and 2014 period alone terrorist attacks either in Xinjiang or linked to the region claimed the lives of 468 people and injured 548.

China has blamed the majority of such attacks on two groups based beyond Xinjiang: the “East Turkistan Islamic Movement” (ETIM) and “Turkistan Islamic Party” (TIP).  Beijing has long claimed that Uyghur opposition has been supported by external forces. During the Cold War, for instance, Beijing blamed Turkey or Soviet-based secular Uyghur nationalists for instigating unrest in Xinjiang.

However, since 9/11 Beijing has consistently labelled Uyghur opposition as “religious extremism” linked to the influence of transnational jihadist organizations such as al Qaeda. While it is clear that ETIM had a presence in Taliban-controlled Afghanistan from the late 1990s onward, its connection with al Qaeda until the events of 9/11 was marginal. After the US invasion of Afghanistan however the group shifted its base operations into Waziristan where its leader, Hasan Mahsum, was killed during a Pakistani military operation. It was in this post-9/11 “Af-Pak” context that links with al Qaeda and its fellow travellers were in fact consolidated with the transformation of ETIM into the TIP in 2005.

Since 2012 TIP has also developed a presence in Syria, fighting alongside al Qaeda’s affiliates, Jabhat al Nusrah and Jabhat Fateh al-Sham. The threat posed by the linkage of TIP to al Qaeda and the Syrian conflict was underlined by the apparent Uyghur connections to the 30 August 2016 terrorist attack on the Chinese embassy in Bishkek, Kyrgyzstan, and the New Year’s Eve nightclub attack in Istanbul, with both attackers believed to have been ethnic Uyghurs with links to Syria.

Beijing’s heightened fears regarding the influence of the militancy espoused by externally-based groups such as TIP has resulted in significant modifications to its approach in Xinjiang.

First, since 2012 the state has intensified its implementation of restrictions on religious dress with some localities in Xinjiang banning burqas, niqabs or hijabs, Islamic symbols such as “crescent and stars,” and even “long beards” on public transport in some cities.

Second, authorities have implemented a concerted counter-terrorism effort based not solely on outright repression of overt opposition but also on comprehensive “everyday” surveillance. This has spanned high to low-technology methods. High-technology methods have ranged from bio-data samples for passports for Uyghur citizens to the installation of China’s “Skynet” electronic surveillance system in major urban areas, providing police and security forces with “high-definition video surveillance cameras on public buses and at bus stops; on roads and in alleys; in markets and shopping centres; and in schools.”

Low-tech measures meanwhile have included the “double-linked household management system,” where households in towns and villages are “divided into groups of ten to watch over each other for security and poverty alleviation.” Policing has also been significantly increased in recent years with authorities establishing in major cities, such as the capital Urumqi, “convenience police stations” – essentially mobile police stations – and increasing patrols of ethnically Uyghur neighbourhoods.

Thus the core dilemma for Beijing is that as it has intensified efforts to integrate the region and its people into the PRC – via an outwardly-oriented economic modernization strategy and tighter social controls – so too has the threat posed by Uyghur militancy increased. Beijing’s response has been to redouble efforts not only to combat aspects of Uyghur identity deemed antithetical to the state’s integrationist agenda but also the implementation of more intrusive and pervasive instruments of surveillance. Rather than ameliorate Uyghur perceptions of relative deprivation, such an approach has arguably reinforced them and created space for terrorist organizations such as TIP to emerge as instruments of political mobilization.

Michael Clarke is Associate Professor at the National Security College, Australian National University. He is the author of Xinjiang and China’s Rise in Central Asia – A History (Routledge 2011), co-editor (with Anna Hayes) of Inside Xinjiang: Analysing Space, Place and Power in China’s Muslim North-West (Routledge 2016), and co-editor (with Douglas Smith) of China’s Frontier Regions: Ethnicity, Economic Integration and Foreign Relations, (I. B. Tauris 2016). Image credit: CC by Wikimedia.