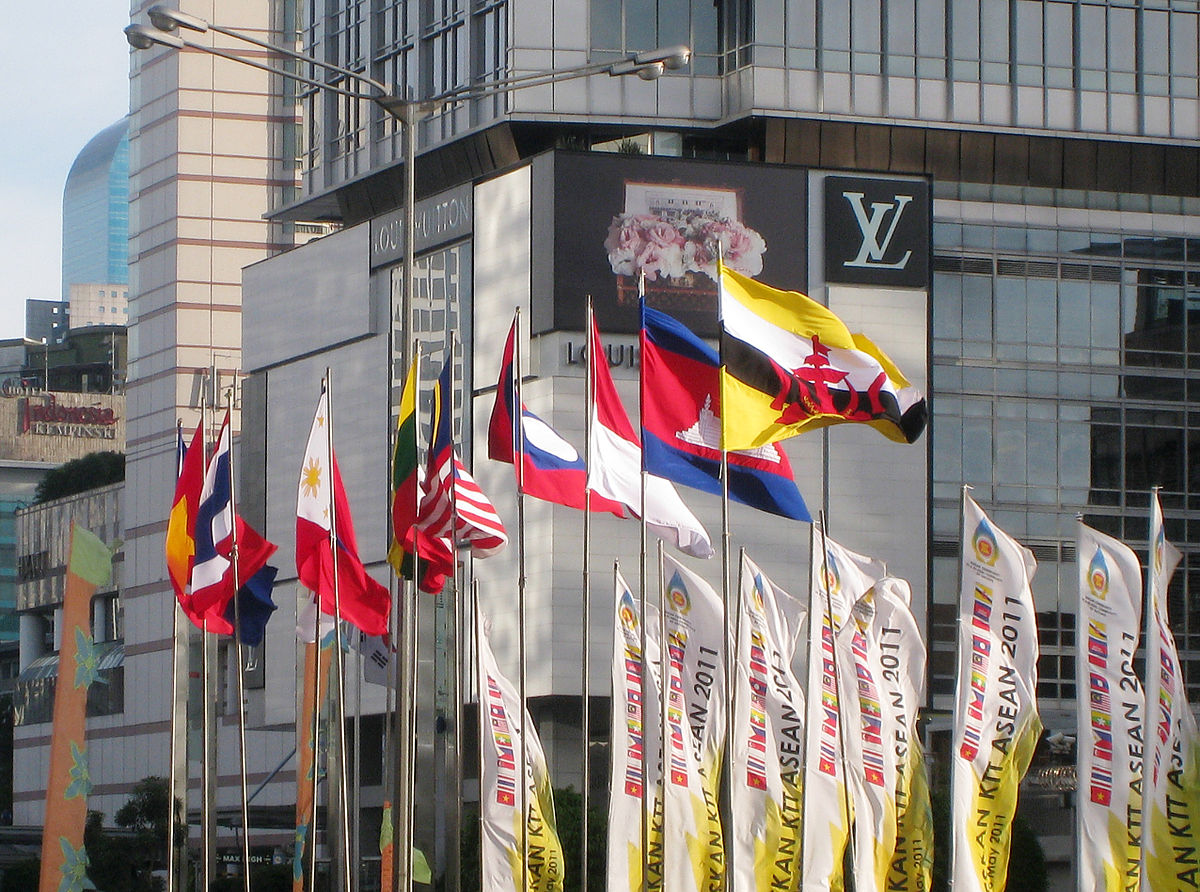 While the term ‘golden’ has thus far been used in relation to UK-China relations, the UK should view Southeast Asia in the same light. This year, the Association for South-east Asian Nations (ASEAN) celebrates its golden jubilee. The future for ASEAN is bright – steady progress has been made in its integration efforts which will help unlock its potential for exceptional economic growth. The United Kingdom has up to now principally engaged with ASEAN through the European Union (EU). However, as Britain prepares to ‘go global’ following its exit from the EU, its lack of experience in trade negotiations means that chances for a deal that affords it better access to China’s domestic markets are slim. In that light, ‘Global Britain’ should recognise that its multi-faceted links to Southeast Asia afford it an opportunity to strengthen its engagement there and position itself as a regional partner in its own right.

No expense was spared for Chinese President Xi Jinping’s state visit to the UK in 2015, with then Prime Minister David Cameron claiming that the UK and China had entered ‘a golden era’. Critics accused London of ‘kowtowing’ to Beijing in return for economic benefits and setting aside less pleasant topics such as human rights in the People’s Republic and ignoring security concerns regarding Chinese control over strategic resources, as was the case in Hinkley Point. Since Prime Minister Theresa May took office, the mood has changed and Beijing has noticed. PM May has attempted to keep the Sino-UK relationship in a positive light, remarking in November 2016 that “as we take the next step in this golden era of relations between the UK and China, I am excited about the opportunities for expanding trade and investment between our two countries”. Given that China’s is the second largest economy in the world this is not surprising, particularly post-Brexit when the UK is no longer part of the world’s largest single market. However, the UK lack of experience in negotiating any trade deals since joining the EU fundamentally places it in a weaker position in trade negotiations, particularly with Beijing who will not easily give in to demands for greater access to its markets. It is for this reason that the UK should look to the burgeoning economy of Southeast Asia and strengthen its engagement in this dynamic region as a future Dialogue Partner of ASEAN. The rewards of doing so would be great, and not just in economic terms.

On 8 August 1967, five countries in Asia established ASEAN. By 1999, its membership had expanded to the existing ten. The purpose of ASEAN was to unite the region in an effort to create an anchor of stability and self-sufficiency, in which no state would have to choose to align itself with or be ruled by competing major powers. Its twin principles of non-intervention into internal affairs and decision-making based on consensus (known as the ‘ASEAN Way’) have sometimes proved to be a hurdle to deeper regional integration. However, ASEAN has made gradual progress towards the creation of an ‘ASEAN Community’ in its three pillars: cultural, political-security and economic. The objective of this is to forge a sense of unity, enhance connectivity and economic prosperity, and maintain peace and stability.

The creation of a ‘cultural community’ has not yet fully caught on – identity creation, after all, takes time. Steady economic integration will require the breaking down of barriers within ASEAN in order to capitalise on the region’s growth potential, but challenges lie in the varying levels of development between member states. In political and security terms, ASEAN hesitates to integrate given its twin-principles. However, cooperation and communication are facilitated through various regional security platforms. The importance of the ASEAN Defence Minister’s Meetings, including those with China, Japan, Russia and the United States, cannot be underestimated. Likewise, the ASEAN Regional Forum and the East Asia Summit are valuable high-level occasions to discuss sensitive political and security questions in Southeast Asia.

So far, the UK has participated in ASEAN through its membership of the EU. The history of EU-ASEAN relations spans across 40 years and in 2015, the EU established a diplomatic Mission to ASEAN and appointed a dedicated Ambassador. The objective is to move towards a strategic partnership, as EU High Representative and Vice-President for External Relations and Security Policy, Ms. Federica Mogherini, highlighted in her opening remarks at the April 2016 Meeting with the ASEAN Committee of Permanent Representatives in Brussels. Furthering dialogue on human rights, expanding cooperation on traditional and non-traditional security issues, and deepening trade and investment relations are all on top of the list. An ‘open skies’ aviation agreement between the two blocs is making progress and an EU-ASEAN FTA is gaining attention in both Brussels and Jakarta, where the ASEAN Secretariat is based. The economic benefits of these initiatives will be great for both regions.

When the UK exits the EU, its involvement with ASEAN will need to be re-invented as a single actor, however, it will in all likelihood be granted Dialogue Partner status by the ASEAN Foreign Ministers. After all, the UK will not be starting from a blank slate. Culturally, the UK has maintained positive people-to-people links, particularly with Commonwealth members Malaysia and Singapore. Indeed, the UK’s soft power is stronger than that of the EU. Although this is changing, thanks to the active public diplomacy of EU delegations in the region, the average citizen in Southeast Asia is not as knowledgeable of the EU, its institutions and the contributions it has made to Southeast Asia over the past 40 years. Furthermore, public diplomacy efforts by the UK as a country and as part of the EU have not been mutually exclusive, and the UK has maintained its unique footprint in the region. These efforts should be strengthened post-Brexit.

It must likewise do so in the realm of security. The Five Powers Defence Arrangement (FPDA), consisting of Britain, Australia, New Zealand, Singapore and Malaysia, is at 46 years old the world’s second-oldest defence partnership. In a region where a high value is placed on a country’s capability in ‘hard power’ terms, the UK fares well. Indeed, although the FPDA was originally conceived as a temporary measure to provide security to independent Malaysia and Singapore, it continues to this day. As British Defence Secretary Michael Fallon stated in June 2016 on the side-lines of the annual Shangri-La Dialogue in Singapore, the FPDA “is more necessary than ever” and is also “a very clear sign of British commitment in the region.” While the UK should increase its security role in the region, it need not be through the placement of an aircraft carrier in the Asia-Pacific by 2020, as Defence Minister Fallon suggested it would do. In a region with significant security challenges and rising defence spending, helping ASEAN member states with capacity building will be one way to ensure peace and stability in the region. The UK could also use its influence in the region to act as a political broker in regional or bilateral disputes.

In economic terms, the benefits of closer bilateral relations are exceptional.  According to a 2013 McKinsey report, ASEAN was at the time the seventh largest economy in the world with a combined GDP of $2.4 trillion. In 2050, it is projected to be the fourth. A dynamic economic future lies ahead for ASEAN, and the UK will be keen to capitalise on this opportunity. Former Prime Minister David Cameron already recognised the centrality of Southeast Asia in the global economy in 2015 when visiting the ASEAN Secretariat in Jakarta, pledging to deepen the UK’s economic ties with the region. At the time, he had also strongly supported an EU-ASEAN FTA.

Following Brexit, however, the UK will be left out of a future FTA between the EU and ASEAN. This is not necessarily a loss for the UK. The path to an FTA with the EU can be long and complex; case in point is the EU-Singapore FTA. While negotiations were concluded in 2014, it has been stalled by a European Court of Justice ruling that classified the FTA as a ‘mixed’ agreement. It must, therefore, be ratified by the EU institutions (Commission, Council and Parliament), as well as by all EU member states. Although FTAs are complex in and of themselves, stepping out of the EU will spare the UK some difficulties of the processes in Brussels. It will, of course, still be faced with a steep learning curve in the field of trade negotiations, given its lack of experience in this field. However, for London, the markets in Southeast Asia may be more accessible than that of China. Whether through bilateral FTAs between London and the capitals of Southeast Asia or through a UK-ASEAN FTA, the potential economic growth in the region stands to benefit all parties. Furthermore, engaging with Southeast Asia may be met with less public scrutiny than deepening Sino-UK relations currently seems to. This is not, it must be noted, an argument for abandoning further trade relations with Beijing for deeper engagement in Southeast Asia. It is not a matter of having to choose between those two options. Instead, it is an argument for recognising all of ‘Global Britain’s opportunities.

In socio-cultural, political-security and economic terms, the UK will, in all likelihood, be able to stand on its own two feet in Southeast Asia. However, it will need to do so in all those areas, and not just through furthering economic ties. Indeed, as an EU member state, it participated in working on issues that may not be easy or popular; human rights issues in a number of South-east Asian countries come to mind. Furthermore, despite having itself left the EU, the UK should underscore that ASEAN, 50 years in existence and having incrementally forged a closer union of nations, has done well. Ultimately, the golden opportunity in ASEAN’s golden jubilee will lie in the UK reinventing itself as a strong, independent actor in Southeast Asia who balances its bilateral interests with the continuation of a thus far successful and stabilising regional organisation.

The University: The Last Pillar of Democracy
Introduction to Special Issue on the South China Sea