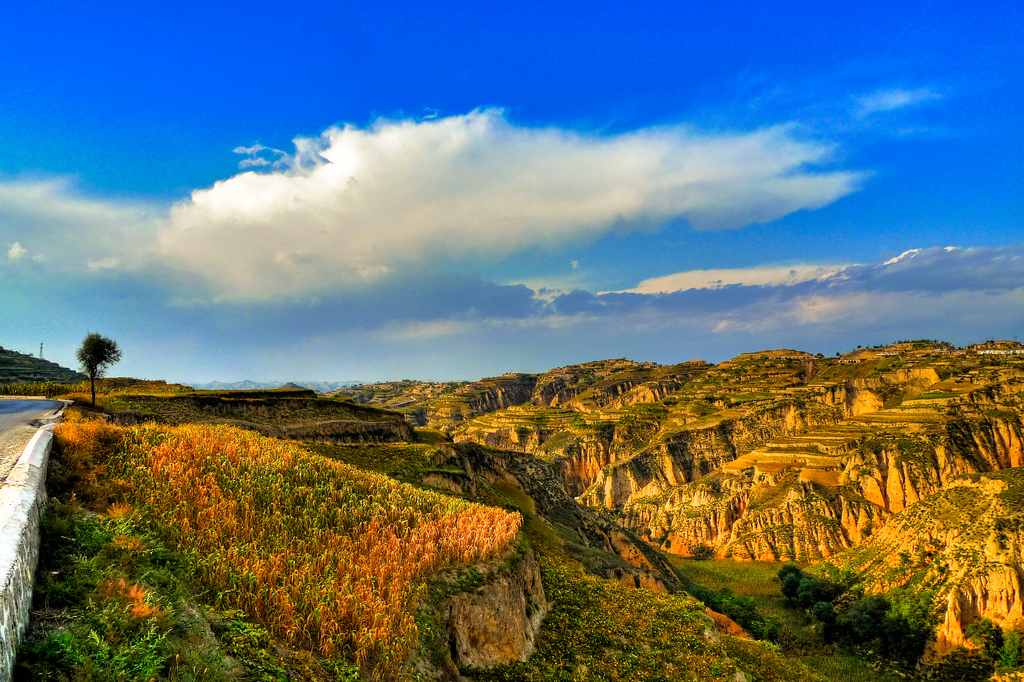 While China’s climate change mitigation efforts (its pilot emissions trading schemes and investment in renewable energy) are widely discussed, its adaptation efforts receive far less attention. Yet China is highly vulnerable to the impacts of climate change and will need to take action to manage these risks. Some of the observed and projected impacts as outlined in the IPCC’s Fifth Assessment Report (Working Group II) are the exacerbation of water scarcity in North China, changes to crop productivity, increased flood risk, more frequent and intense heatwaves, and changes in the geographical distribution of vector-borne diseases. Glaciers on the Qinghai-Tibet plateau are retreating rapidly, while sea-level rise threatens Shanghai’s drinking water. China’s agricultural sector is particularly vulnerable as it faces a range of climate change impacts compounded by existing environmental (and social) problems. In managing the impacts of climate change on agriculture to ensure food security and to protect the livelihoods of millions of smallholder farmers, China faces two key challenges.

The first challenge is to understand the nature of climate change impacts. On the Loess Plateau in Shanxi where I do most of my fieldwork, apple farmers are facing more prolonged and frequent droughts, changing rainfall patterns, and increased evaporation, all of which have led to increased agricultural water stress. The lack of water in the growing months places stress on apple trees, particularly new saplings. In addition, extreme high temperatures have become more common, resulting in sunburnt fruit which are not marketable. These impacts are of course specific to the area, which already has a highly variable climate, and where irrigation is becoming more common but there is not always piped water available during droughts. Impacts on the North China Plain where agriculture is well irrigated will be different, and impacts on different cropping systems (grain, horticulture, livestock etc) will also vary. But even within villages impacts are more severe for some farmers than for others. In Shanxi, while wealthier farmers and local agribusinesses have the capacity to invest in new irrigation technologies, orchard nets, and other agricultural technologies, poorer farmers have little capacity to do so and also have less of a financial buffer to cope with reduced yield.

The second challenge is what to do about it. China’s 2013 National Climate Change Adaptation Strategy outlines the broad strategy for adaptation in forestry, infrastructure, coastal zones, agriculture and other sectors. For agriculture, specific strategies include soil fertility improvements, water-saving irrigation, changes to cropping boundaries, and the use of heat- and drought-tolerant crop varieties. An early warning disaster system is also planned, as are activities to increase village disaster-preparedness. The 2013 Strategy also identifies resettlement as a climate change adaptation strategy, particularly in the Loess Plateau. Provincial governments also have adaptation plans, while county and district governments will be largely responsible for implementing specific initiatives. Farmers will certainly need help to adapt: in a recent paper in the journal Regional Environmental Change, the authors found that smallholder farmers in the Loess Plateau are highly unlikely to adapt on their own, but were overwhelmingly willing to participate in government-led adaptation efforts. But what kinds of adaptation efforts are likely to have better outcomes?

In situ adaptation should always be the first port of call. Do villages need investment in particular infrastructure or technologies to reduce climate impacts? Do farmers want training or extension services? Do they want assistance to move into off-farm employment? Do they need disaster relief funds or simply better social security? Do they want access to better climate and weather data? Do they want to diversify into crops (or crop varieties) better suited to a changing climate? Ideally adaptation should be about making rural livelihoods more secure, and fair adaptation should focus resources on the most vulnerable. Adaptation efforts will of course be shaped by China’s particular political economy. Many county governments are under-resourced, and because of the cadre evaluation system have a tendency to push for highly visible ‘model’ projects over a fairer distribution of resources. Elsewhere I have discussed these and other issues that may constrain China’s ability to successfully adapt to climate change.

Adaptation faces the same constraints as other environment or development-related interventions: it has to contend with uncertain outcomes, social stratification, and complex power relations. It demands that we ask quite fundamental questions about place, well-being, and identity. China faces a huge task in adapting its increasingly diverse agricultural sector, and in ensuring that adaptation efforts (or the lack thereof) do not further entrench existing inequality. Given that climate change impacts have the potential to derail Xi Jinping’s poverty alleviation goals, there should be plenty of political will at hand.

Sarah Rogers is a Research Fellow at the University of Melbourne’s Centre for Contemporary Chinese Studies. She is a geographer who specialises in social and environmental change in rural China. Her recent publications can be found in Transactions of the Institute of British Geographers, Nature, and WIREs Climate Change. Image Credit: CC by chaostm/Flickr.

A Canadian Tragedy: India, Canada, and the Resurgence of Transnational Terrorism in North America
American Soft Power and the Philippines: The Need to Stay 'Smart'