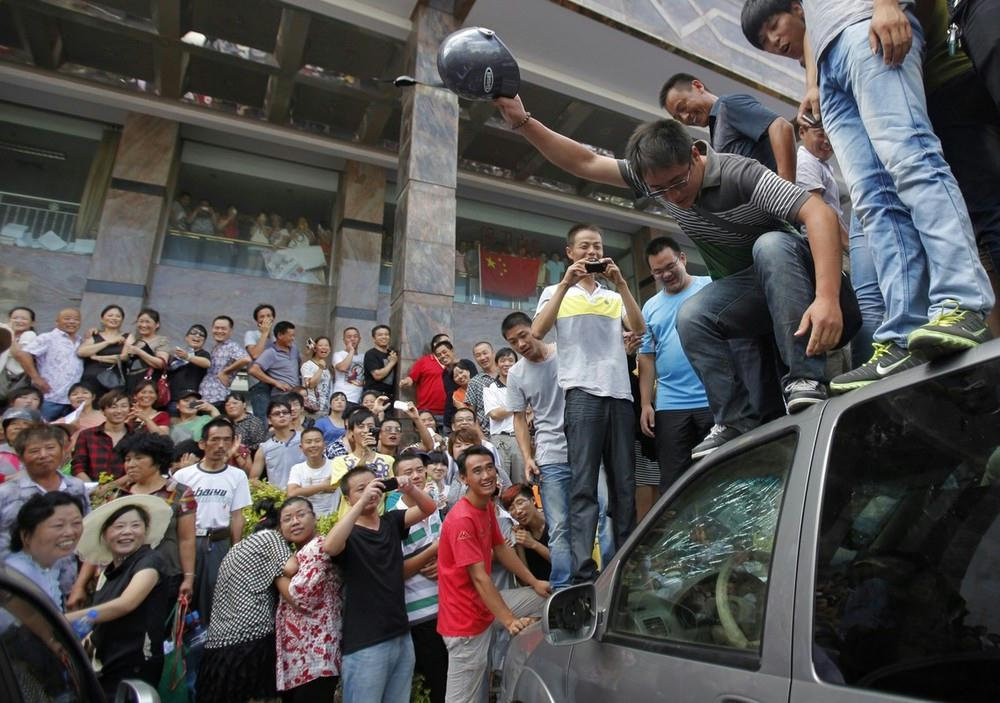 Two men are walking. And talking. One is wearing a hard hat. The man in the hard hat appears to be taking pictures with a smartphone. Belying the mundaneness of this scene are an overturned car next to them, littered papers, other people milling about, and a building’s balconies brimming with human bodies. The upended car is marked with the Chinese characters 公安 (gong an), meaning “public peace” or “public safety.” They identify the vehicle as a police car and the scene as China.

This image was one of hundreds captured during a demonstration on July 28, 2012 against a proposed industrial waste pipeline in Qidong. Hours of violent protest succeeded in halting it from being built and pumping 150,000 tons of industrial wastewater into the East China Sea. Information and indignation traveled via tangled networks of online and off-line communication as images of bloody faces, overturned police cars, and sign-wielding protesters from Qidong flooded Chinese social media, spreading evidence of the event across the country at a speed too fast for government censors. These striking images of violence and people prompted authorities, protesters, and neighboring provinces to participate in a cacophonous conversation on social media to protect their bodies, fish, and the sea that sustains them.

This protest is but one of a string of large-scale environmental protests that have crisscrossed China over the last decade. China’s emergence as a world superpower and its avid adoption of social media are two events that rupture the world as it is and make space for new forms of activism. The proliferating environmental protests that often are organized, spread, and documented on social media in the face of increasing levels of censorship and surveillance offer models for innovative protest practices. These new protest practices harness wildness to persist—the wildness of social media, the wildness of language, and the wildness of networks.

Looking to China and the protests erupting now is of great import. Extensive surveillance networks, or what we term the Internet-enabled global surveillance society (GSS), records people’s every email, social media post, and conversation that occurs wherever smartphones are present. These massive data-collection tactics are not limited to authoritarian countries, as the 2017 Wikileaks Vault 7 release of CIA documents detailing surveillance and hacking practices and the 2013 Snowden NSA leaks reveal. U.S. citizens are also under constant surveillance, as are many of their Western democratic counterparts. One major difference is that the U.S. only recently learned about the massive surveillance systems collecting data in warehouses like the one in Utah, whereas Chinese citizens have long been aware that they are being surveilled. As a result, Chinese activists have ample practice in circumventing the ever-changing and growing monitoring systems.

The protests that erupt despite China’s elaborate system of surveillance and censorship serve as a paradigmatic example of how to deploy social media to create public spaces of activism in the context of the GSS. The combative dance between government and activists suggests that technology is neither savior nor villain. Instead, social media platforms are contested public spaces, enabling government surveillance beyond the nightmarish fantasies of the Stasi while also offering activists powerful tools for diverse forms of creative resistance.

Activists often find that their best tool for communicating amid surveillance systems is wildness, which is found within the dense networks of panmediation. As the world’s largest Internet nation, Chinese Internet users represent a significant and increasing share of the online universe, growing from 22.5 million in 2000 to over 720 million in 2016 (compared to the roughly 286 million users in the U.S.). Of these, 313 million are monthly active users on Weibo and 700 million on Weixin. Citizens, merged with smartphones and social media platforms have new potentials to become decentered knots of world-making capable of cultivating pockets of democracy within an authoritarian regime. Through their work, they show how democracy lives in practices, not institutional protections. Though Chinese censorship technology (largely produced by Western companies for surveillance purposes) thwarts open communication, it does not silence it. Weibo and Weixin’s formats offer space to covertly communicate via persistent creative methods. When words or phrases are censored, people turn to images. When images are removed, they use the walkie-talkie function. When posts begin disappearing, people check their feeds often and download immediately or move sensitive conversations to the wee hours of the morning when human censors are sleeping.

Creative users also rely heavily on other tactics, including the use of phonograms, symbols, and memes. The Chinese language’s dependence on tonality and context for meaning offers multitudes of phonograms with which users can play. People also understand the power of using more common words as substitutes for easy to censor words. For example, protest organizers avoid the word protest in communications, by inviting others to “take a stroll” (sanbu), which can travel across social media platforms untouched. Memes duck the censors by transforming text into graphics. During red air quality days, people in Beijing share selfies wearing air masks and images of easily recognizable buildings fading into the smog to communicate their discontent. Some use Photoshop-like programs to draw the disappearing buildings back into the photos to evidence the severity of the situation. The wildness of words, images, and networks spawn infinite iterations that tumble across platforms, constantly morphing to stay ahead of censors.

The practices of Chinese citizens in the age of the GSS can show activists worldwide how to play these protean platforms to elide, elude, and defy ubiquitous surveillance systems. Awareness of the GSS should motivate activists everywhere contesting corporate and governmental domination to take surveillance and the dark side of the Internet seriously, in addition to exercising the creativity and joy of play. As the example of Chinese activism demonstrates, in the GSS tools and tactics of evasion and insurgency, creativity and networking, become imperatives for making changes and imagining alternative worlds. Movements will ultimately be shaped by the circumstances at hand, but Chinese netizens’ call to creativity has the potential to inspire activists across oceans.

Dr. Kevin Michael DeLuca is a Professor of Communication, an Environmental Humanities Research Professor, and an Adjunct Professor in the Asian Studies Program at the University of Utah. His scholarship explores how humanity’s relations to nature are mediated by technology. Besides the book Image Politics, DeLuca has published dozens of essays on media, activism, social theory, images, events, and force.  His most recent work engages environmental activism and social media in China. With Dr. Brunner, he is currently writing a book titled The Wild Public Screens of China: Environmental Activism, Social Media, and the Emerging Civil Society of China.

Dr. Elizabeth Brunner is an Assistant Professor of Communication at Idaho State University. Her scholarship focuses on social movements in the US and China, with an emphasis on the use of social media in environmental activism in China. She has published essays on visual rhetoric, new media, civic engagement, and transnational social movements.

America’s Road to World War II: Asia, and the Beginnings of the American Century
Marketing the American Way of Life: US Cultural Diplomacy in Iran, 1953-58