Thinking outside the Urn: China and the reincarnation of Mongolia’s highest lama

Home /China, Government/Thinking outside the Urn: China and the reincarnation of Mongolia’s highest lama 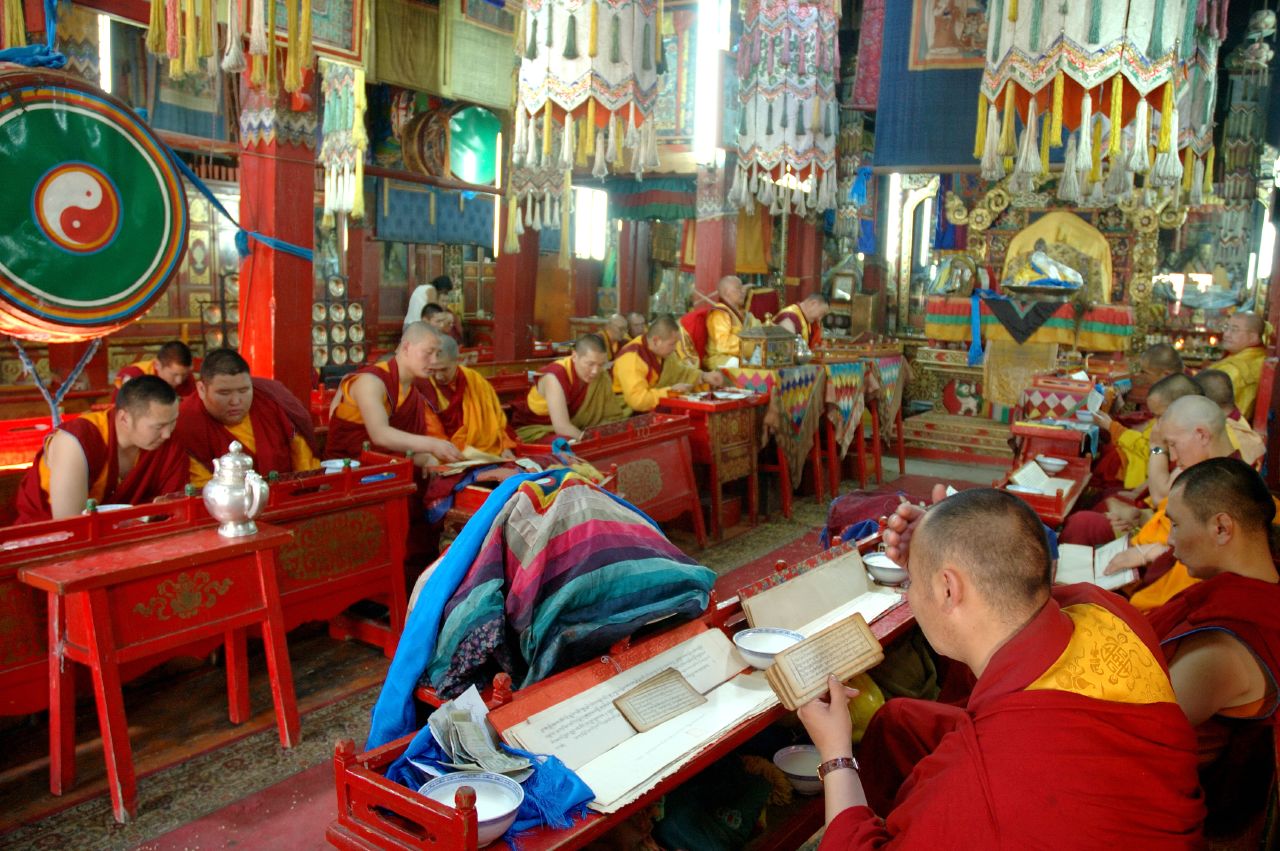 The Chinese government’s prerogative to manage the rebirths of incarnate lamas is being tested in Mongolia. One of the highest lineages covered by the Qing’s ‘Golden Urn’ system at the basis of PRC reincarnation law is passing to its next holder, with the Dalai Lama’s involvement. Despite clear signs that China cares, no public position has emerged so far. To determine what China’s approach to the reincarnation issue might be, we have to go through some Mongolian history and a bit of leaf-reading. The very relevance of state management of rebirths to China’s foreign relations indicates to what extent Qing imperial thought permeates PRC policy. Reincarnation diplomacy is real and has an impact on Chinese policies towards its closest neighbours.

On the last day of his ninth visit to Mongolia last November, the Dalai Lama announced that the tenth reincarnation of the Jebtsundamba རྗེ་བཙུན་དམ་པ་ Khutugtu, the highest Mongolian lama, had been found as to be a Mongolian boy. However, this boy would not be publicly enthroned because of his young age. China certainly objected to the Mongolia visit and responded to it with sanctions. As I have discussed in a recent piece, China only showed a will to normalise relations after the Mongolian government produced a ‘non-apology’ that regretted the “misunderstanding” and stated an assumption that the Dalai Lama would not visit again under during the current parliament. Although China’s protests didn’t mention the reincarnation issue, China’s interest in it is revealed by its mention in the various Chinese and Mongolian versions of the Mongolian position. To quote from the most explicit ones: the public announcement of the new Jebtsundamba (and, in one version, his education) will be the responsibility of Mongolian monks, without “outside participation.” The implication being that, as the process is a strictly religious matter, it falls beyond the government’s purview. So far, that seems consistent with the plans of Mongolian clergy, who said in January the tenth reincarnation would be enthroned by Mongolian lamas, and that the process had not started yet.

The first Jebtsundamba was the Mongolian polymath Zanabazar (1635-1723), the second son of the Tüsheet Khan Gombodorj, who ruled over one of the Mongolian polities of the time. His recognition as the reincarnation of a major Tibetan lama was likely intended to buttress the Tüsheet Khans’ primacy among the Khalkha (eastern) Mongols and help them match the status of the other centres of Mongol power: the Dzungars in the west and the southern Mongols, already allied to the Manchus’ emerging Qing dynasty. Zanabazar’s later role the Khalkhas’ submission to Kangxi, key to the Qing’s eventual defeat of the Dzungars and conquest of much of Central Asia, made Mongolian nationalist historiography blame him for the subsequent centuries of Chinese rule. Chinese scholars praise him, for much the same reasons.

After an anti-Qing rebellion among the Khalkhas in which the second Jebtsundamba had an ambiguous role (his brother was executed for cooperating with its leader), emperor Qianlong ordered subsequent reincarnations to be born in Tibet, in what would later become part of the Golden Urn (金瓶) selection system, a Qing-managed ‘reincarnation lottery’ that gave imperial authorities control over the highest religious figures in Tibet and Mongolia. Qing-approved high lamas, who would recognise the emperor as a Buddhist ruler (cakravartin, ‘turner of the wheel’), rather than locally-born leaders who could help catalyse challenges to imperial power, were key to Beijing’s Central Asian policy.

For the next five reincarnations, the Urn lottery worked as expected, providing empire-friendly, purely religious figures who spent their short lives (only one lived into his thirties) as Tibetan-born foreigners in Mongolia.

Then the Empire lost at its own rigged raffle. Although also from Tibet, the Eighth Jebtsundamba adapted well to life among the Khalkha. He learnt the language, and his popularity and political savvy made him the centre of Outer Mongolian politics, culminating in his proclamation as theocratic ruler of independent Mongolia when the Qing fell in 1911. By the time he died in 1924, the Communists were in power and decreed the end of the lineage. Although there were attempts to install a Mongolian boy as ninth reincarnation, they couldn’t get Tibetan approval and were eventually suppressed. The government later launched a brutal suppression of Buddhism that precluded any further efforts to revive the lineage.

Meanwhile, in Tibet, a boy born in 1933 was secretly identified as the 9th Jebtsundamba reincarnation. He left Tibet in 1959 and lived, mostly in poverty, in Nepal and India, until being announced as 9th Jebtsundamba by the Dalai Lama after the end of Communism in Mongolia in the early 1990s. He first visited Mongolia in 1999, among Chinese protests, and had to wait until 2010 to be allowed in again and made a Mongolian citizen. He died in Ulaanbaatar in 2012. The Mongolian public would likely only accept the next reincarnation to be born in Mongolia, and indeed that’s where the Dalai Lama says he told the old 9th Jebtsundamba to go in his next life. That’s why there was an expectation that the reincarnation would be announced during last November’s visit.

Remarkably, Qianlong’s Urn lottery is still running. The continuity of Qing-inherited control over reincarnations is central to the justification of the PRC’s prerogative to appoint the most senior Tibetan Buddhist clergy. Current PRC reincarnation law explicitly refers to the Golden Urn system, as did its ROC precedent in 1936. Incarnate lamas continue to play a key role in Tibetan society, and government control over this hierarchy is meant to help legitimise Beijing’s right to rule Tibetan Buddhists, precisely as devised by 18th-century emperors. The Urn system, embedded in Chinese law, sits at the top of this structure. The current Dalai Lama’s assertions that it will be up to him to decide where to reincarnate next, if at all, were strongly attacked by Chinese officials, indeed on grounds of historical continuity centred on the Urn system. The PRC has used it exactly once, selecting its 11th Panchen Lama in 1995 after detaining the candidate approved by the Dalai Lama. Given how invested PRC discourse is in the legitimacy of the Urn system, an outside-the-Urn Jebtsundamba can be perceived as a challenge to imperial continuity, and a ‘rehearsal’ of a more serious one, the Dalai Lama’s own succession outside China.

What does China think?

Despite the challenge to PRC religious policy implied by an outside-the-Urn reincarnation, China hasn’t published any statements on the 10th Jebtsundamba, and the only public evidence of its concerns is its reflection in the Mongolian response.

To try and guess what Chinese officials think about the Jebtsundamba reincarnation, we can look for views on the previous lineage holder, recognised without Chinese consent. A 2009 article by Selengge ᠰᠡᠯᠡᠩᠭᠡ 斯林格, head of the Russia and Mongolia Research Institute at the Inner Mongolia Academy of Social Sciences, is sceptical about his legitimacy. The paper examines the “complex and sensitive problem” of the 9th Jebtsundamba reincarnation, highlighting the involvement of pro-Japanese Mongolians in his recognition process, and the role of the “Dalai clique” (达赖集团, Party-speak for the Dharamsala-based Tibetan government in exile) in his 1999 Mongolia trip. Selengge’s views, coming from a senior researcher who has been involved in exchanges with Russia and Mongolia, are significant, and consistent with the idea that Chinese authorities consider the Jebtsundamba lineage to have finished with the 8th reincarnation. Although, as I will discuss in an expanded version of this piece, the PRC actually allowed the 9th Jebtsundamba to lecture and perform rituals at his ancestral monastery, the Püntsokling ཕུན་ཚོགས་གླིང་ 彭措林 in Lhatse, Tibet, after his enthronement by the Dalai Lama, the very ‘sensitivity’ attached to that visit, which was hard to arrange, cut short, and omitted in official information about the monastery, shows that the PRC authorities were uncomfortable with the ninth reincarnation. If the ninth reincarnation was unacceptable to China, so should be the tenth.

A more explicit discussion of the Jebtsundamba issue, complete with policy recommendations, appeared in a 2011 article published by the China Energy Fund Committee (中华能源基金会, CEFC), a think tank with PLA links established by energy company CEFC (华信). The article calls the restoration of the Jebtsundamba lineage in Mongolia “a great victory and a breakthrough for the Dalai clique” that can sow discord in Tibetan Buddhism by challenging the reincarnation system “unified” by Qianlong’s Golden Urn procedure. “The Indian government and the CIA” were involved. The Chinese government should foster religious exchanges with Russia and Mongolia, dispatching “virtuous and respected high monks” and using “social and economic methods” to compete with the Dalai clique. Finally, China should take the lead to coordinate the establishment of a “unified system for the search, recognition and final announcement” of incarnate lamas in the three countries, in order to restrict Dharamsala’s influence. Though unofficial, such advice is consistent with China’s current approach to Mongolian Buddhism, that involves cultivating ties to Dalai-unfriendly Mongolian monasteries and seemingly exploiting, as elsewhere, the Dorje Shugden controversy.

After such efforts didn’t prevent the Dalai Lama’s participation in, at least, the announcement of the new reincarnation, they might now be focused on trying to isolate him from Dharamsala, especially during his training years. Mongolia’s response to Chinese protests does suggest China privately requested that no exile Tibetan lamas anoint or tutor the future Jebtsundamba. Precedent for ‘tolerated’ reincarnations, although none as senior as the Jebtsundamba, exists. Indeed, China didn’t object to, for example, the Dalai Lama’s 2004 recognition of the Jalkhanz རྒྱལ་ཁང་རྩེ Khutugtu, the latest representative of what is likely the oldest lineage of Khalkha Mongolian incarnate lamas. As Johan Elverskog, known for his work on the Mongols and the Qing, puts it, the PRC “recognise they don’t need to control all the reincarnations, especially those outside the 1949 borders, and don’t care about Nyingma or Sakya incarnations – or [Treasure Revealer (གཏེར་སྟོན་)] Steven Seagal.”

At any rate, a Mongolian, but China-friendly, Jebtsundamba without Dharamsala ties is probably the most ambitious goal China can attain: trying to enforce the Golden Urn procedure would amount to imposing, or vetting, a religious leader on Mongolia, and the backlash could seriously hurt Chinese interests there. A subtler, longer-term approach, such as that which appears to be underway, can find allies within Mongolia’s political and religious establishment, and still succeed at a degree of extraterritorial enforcement of the PRC’s Qing-inherited religious policies. Such a senior outside-the-Urn reincarnation might be hard to accept for the would-be cakravartins (Buddhist rulers) at the ‘relevant departments,’ but it seems they’ll have to live with it.

Jichang Lulu is an independent researcher and writes frequently on China’s interests in the Arctic. Image Credit: CC by John Pannell/Flickr.  An extended version of this piece can be found here at the author’s blog.

Interpreting the Uttar Pradesh results
Congress landslide in Punjab or back to the future?