Home /North Korea, Security, United States/America has a THAAD Missile Problem in Korea– It Must Move Quickly and Carefully to Resolve It 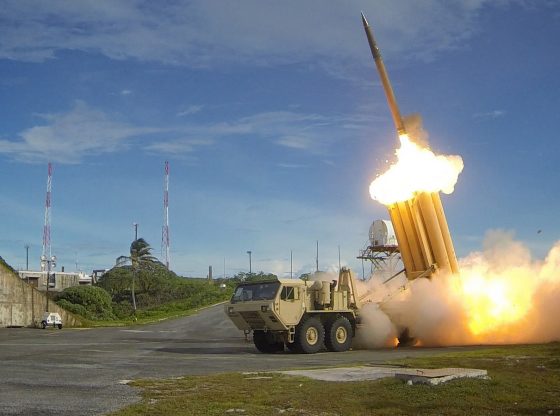 As President Donald Trump and President Xi Jinping sit down together in Florida, it is clear that the White House’s priority is the Korean peninsula. North Korea’s nuclear missile program is putting the American mainland increasingly in range, changing the strategic calculus in Washington.

The Pentagon stresses that its THAAD missile defence system is intended to protect South Korea and Japan from a North Korean nuclear missile strike, but China worries that it will compromise its position in the Pacific region. The deployment was arranged during the final months of the Obama administration with the now deposed South Korean President, Park Geun-hye. Unsettlingly for the new US administration, the next presumptive President of South Korea, Moon Jae-in, favours a much more cooperative approach toward North Korea and may order the removal of the missile system. China’s anger and Moon’s coolness to THAAD contrast starkly with President Trump’s brash attitude towards diplomacy and his determination to “solve North Korea”.

Whether or not THAAD is maintained in South Korea, things are headed toward crisis-level on the Peninsula.

THAAD, a US operated anti-ballistic missile system, is expected to be fully operational in South Korea by the summer. In many ways, it is difficult to understand why the Chinese resent the system so much. With an effective range of over 200 kilometres, it is designed to intercept incoming ballistic missiles at speeds of over Mach 8 and is a defensive, rather than offensive system. The missiles do not even carry warheads, relying solely on the kinetic energy of impact to destroy incoming missiles. Despite this, China’s Ambassador to South Korea, Qiu Guohong, has gone so far as to say that the deployment of the system could destroy the Beijing-Seoul relationship “in an instant”. It appears that the main sticking point for the Chinese is the powerful X-band radar that is part of the missile systems compliment. It has a far-reaching detection range, capable of penetrating Chinese territory. Here in lies China’s fears, as theoretically speaking, using the long range radar the US could spy on Chinese air force activities.

The recently ousted President Park took a firm policy line against North Korea, advocating a stronger South Korean military contribution to the US-Korean alliance, and vowed not to be threatened by North Korean provocations. However, her fall from power, after a corruption scandal now put the agreement at risk. Fresh presidential elections are due in May and the front-runner, Moon Jae-in, has a very different policy stance towards the North. A former aide to former President Roh Moo-hyun, Moon’s policies are often referred to as “Sunshine Policy 2.0”. If he wins the election on May 9th – as polls currently predict – he will likely soften his country’s policy towards North Korea and consider removing THAAD from South Korea.

In a major policy speech last month Moon stated, “We have no choice but to recognize Kim Jong Un as a counterpart” signalling his intent to pursue a more cooperative partnership with rogue state to the north. This poses a serious break with US policy which has become even more determined to tackle the “big, big problem” that Trump sees with North Korea. Worse still – from Trump’s point of view – Moon may also see getting rid of THAAD as a way of buying Chinese favour and of calming the growing crisis in Sino-Korean relations.

So what are Trump’s options? The President, a former businessman, is well known for his “never back down” negotiation attitude. Nevertheless, he may want to tread lightly if he wants to balance coming down hard on North Korea, maintaining South Korea as a close partner and calming Chinese concerns over THAAD’s deployment. In response to North Korean escalation of its nuclear programme China has banned coal imports from the country but, as North Korea imports most of its energy and food supplies from China, analysts say that it’s not enough. A possible route for Trump is to craft a deal that would involve China drastically increasing its economic sanctions against the rouge state in return for a drawdown of THAAD. This option could have the potential to please everyone. It will ensure that a South Korea under Moon would not drift away from the US towards China, as it would meet his desire to have the missiles removed from the country. China would be also be comforted by the removal of THAAD. North Korea may be squeezed so tightly that it may have to draw back on its nuclear ambitions and Donal Trump get to play the deal-maker.

If Trump still wants to play hard ball with North Korea he is going to need to face down these two major problems sooner rather than later, he could try the diplomatic route, but his foreign relations so far have been defined by trade and military capabilities. He may not even consider the removal of THAAD as in his mind it would be a symbol of America on the retreat rather than compromising. If he does not resolve this crisis quickly, with China’s anger and Moon’s preference for cooperation over confrontation, Trump could find a North Korea still as dangerous and unstable as before but with few partners in the region to work with to bring about a solution to the North Korean problem

Towards an India-EU Security Partnership in the Indian Ocean
India and Africa: The Students of Today will be the Leaders of Tomorrow