Home /China, Taiwan/Creative Ideas for Conflict Resolution in the Taiwan Strait Must be Based on Facts 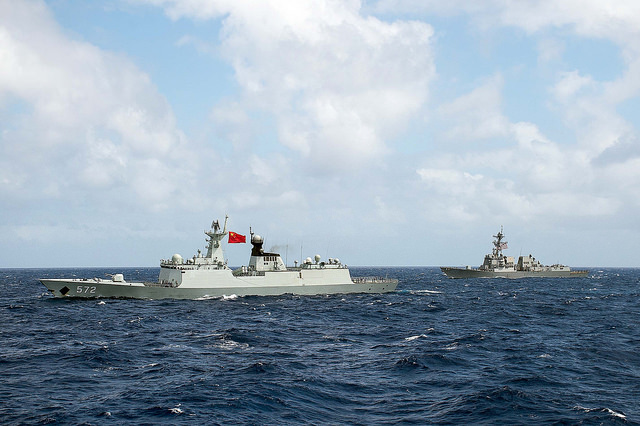 In an article published in the Diplomat on 4 April, Dr. Liu Yawei, director of the China Program at the Carter Center and founding editor of the U.S.-China Perception Monitor, proposes five areas in which U.S. President Donald Trump and his Chinese counterpart, President Xi Jinping, could cooperate after their groundbreaking meeting in Florida later this week.

While there is much to agree on his first four “doables,” which among other things call for Beijing and Washington to work together in resolving a variety of global challenges, from trade to territorial dispute, his last point, which is specifically on the Taiwan “issue,” presents a picture of the trilateral relationship that unfortunately has much more in common with the Chinese Communist Party’s wishes than with reality, a fact which weakens the potency of Dr. Liu’s “doable” as a means to shed light on, if not resolve, the longstanding dispute.

“The reality now,” Liu writes, “is that mainland China [sic] and Taiwan are so commercially, financially, and culturally connected that the role of divisive politics in promoting Taiwan independence in Taiwan has been in sharp decline.”

He continues: “Even the election of a DPP [Democratic Progressive Party] president cannot change the fact that Taiwan’s people care more about liberty than sovereignty.”

Here Dr. Liu errs. The notion that “divisive politics in promoting Taiwan independence in Taiwan has been in sharp decline” simply does not reflect reality in Taiwan, where even most Kuomintang (KMT) supporters have made it clear they have no desire to become part of the People’s Republic of China (PRC). Over the decades, despite efforts by Beijing and the previous administration in Taiwan to promote “oneness” across the Taiwan Strait, self-identification as Taiwanese has risen steadily, as have been support for either de facto independence (the “status quo”) or de jure independence. Meanwhile, support for unification has been at an all-time, single-digit low, and is now mostly identified with fringe groups who are either violent gangsters or PRC proxies (sometimes both).

Where the debate in Taiwanese society has been divisive is not so much on whether Taiwan (or the Republic of China, as it is officially known) should become part of the PRC, but rather over process and how to preserve the freedoms, system of governance, and just as important, the idiosyncratic nature of Taiwan’s identity. The dispute in the Taiwan Strait is therefore not just about freedom; it is equally about identity. And on this issue, notwithstanding the cultural, linguistic, and economic ties (which have been eroding) that to a certain extend bond the two sides, the two identity lines are extending away from each other and will continue to do so.

I therefore respectfully disagree with Prof. Liu’s contention that “[e]ven the election of a DPP president cannot change the fact that Taiwan’s people care more about liberty than sovereignty.” His views, furthermore, make the intellectual mistake of assuming that Taiwanese self-determination is somehow different from self-determination elsewhere, that the people of Taiwan will be content with freedom and do not care about, or do not see themselves defined by, their identity. This view, while dovetailing with the CCP’s starting point that unification is inevitable and that Taiwan was, is, and will always be part of China, simply does not stand scrutiny.

Turning to U.S. military assistance, Liu then offers a quid pro quo: “many things can be done by both sides to make the Taiwan issue a non-issue in U.S.-China relations. For example, can the United States agree to reduce or even stop selling arms to Taiwan if China stops deploying missiles aiming at Taiwan.”

The notion of a quid pro quo, whereby the U.S. ceases arms sales to Taiwan if and when the PRC stops targeting the island with ballistic missiles, fails on several points. For one thing, the PRC military threat against Taiwan is multifaceted: the 1,500 or so missiles, though a key factor, are but one of many components of that threat. Moreover, many of the medium-range missiles in the People’s Liberation Army (PLA) arsenal could be retargeted at a moment’s notice, meaning that the benefits to Taiwan of the proposed quid pro quo would be temporary at best, while it would take years for Taiwan’s military to compensate for lack of U.S. arms sales, provided that such a process could even be resurrected after going into dormancy.

U.S. arms sales to Taiwan have an equally important political element to them; in other words, their defensive value is no more important (and some would even argue that it is less so) than the symbolism of political support that stems from such transactions.

A more balanced qui pro quo, therefore, would be for Russia to cease all arms sales to China.

Finally, Dr. Liu writes that, “When negotiations between China and the United Kingdom on the future status of Hong Kong deadlocked, Deng Xiaoping broke it with the famous concept of ‘one country, two systems’ that would be guaranteed for at least 50 years.” Such accommodation, Liu contends, could be possible again. “Recently, mainland Taiwan affairs officials have floated the idea of ‘one China, two systems of governance,’ which may also be used to allay the American fear that China may use force to make Taiwan part of China.”

The problem here is that the fears that need to be allayed aren’t just American, but Taiwanese as well. In other words, Taiwanese have, and should always have, agency when their future is being decided. And following recent developments in Hong Kong (which Taiwanese have been paying close attention to), it is difficult to imagine there might be anyone in Taiwan who believes that Beijing can be trusted with honouring a “one China, two systems of governance” framework. China’s credibility gap, therefore, might very well be its greatest obstacle.

Resolving the highly complex conflict in the Taiwan Strait will certainly require creativity, vision, and an element of risk-taking. Dr. Liu’s efforts to find creative “doables,” should therefore be commended. However, if a just solution is ever to be found, its foundations will have to rest on the facts, and not illusion or the wishes of CCP decision makers. In other words, the “doables” will have to be…doable.

J. Michael Cole is a Taipei-based senior fellow with the China Policy Institute, University of Nottingham, and associate researcher with the French Center for Research on Contemporary China. He is chief editor of Taiwan Sentinel. Image credit: CC by Naval Surface Warriors/Flickr.