Towards an India-EU Security Partnership in the Indian Ocean 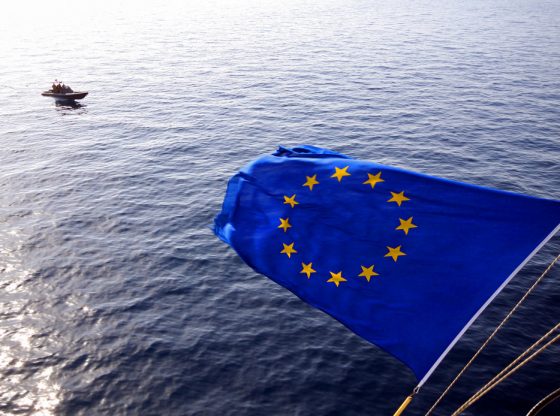 Is there a case for greater maritime convergence between India and the European Union in the Indian Ocean? While there has been much advocacy of a closer security relationship, there is no escaping the sense that despite shared interests in maritime Asia, Brussels and New Delhi remain hesitant partners. This is surprising, considering that bilateral political ties have been strong and maritime security a key priority-area for both sides.

The EU’s emphasis on facilitating sustainable development in areas such as energy, fisheries, and macroeconomic policies, allows regional powers like India to focus more on traditional security provisioning.

To a degree, the nautical deficit seems driven by perceptions. Indian policymakers have long viewed the EU as a reluctant player in the politics of the Indian Ocean. Notwithstanding Brussels’ substantial contribution to global governance, Indian policymakers believe the EU lacks the political heft and military power to influence strategic issues in Asian littorals. Similarly, European legislators view India as being materially and institutionally unprepared to play a leadership role in the Indo-Pacific region.

Beyond cognitive biases, however, the issue is also one of variable operational postures, where the EU’s security strategy in the Indian Ocean differs considerably from the approach adopted by India. The EU’s most talked about security initiative in the Indian Ocean, the counter-piracy mission of the EU Naval Force, EU NAVFOR (Operation ATALANTA) applies mainly to the maintenance of good order in the Horn of Africa and the Western Indian Ocean. While the program is useful for securing Somalia-bound shipments belonging to the World Food Program and the African Union Mission, it does not extend to other sensitive Indian Ocean littorals, where the competing interests of regional and extra-regional powers and non-state actor violence have generated much security anxiety. Unlike India’s patrolling and surveillance-heavy approach in the Southern Asian littorals, EU endeavors are essentially capacity building projects meant for Western Indian Ocean states. Many of these (for instance EU MASE) focus exclusively on the Eastern African littorals, widely perceived as Europe’s ‘proximate’ seas.

Part of the problem, European experts point out, is that the EU’s Maritime Security Strategy (EUMSS-2014) — which claims “strategic interests” in the global maritime commons — is not truly ‘global’ in its approach. For one thing, the strategy is mainly a sea-basin strategy meant to secure the waters around Europe’s outermost regions. Its real intention is to improve sub-regional and inter-European coordination to clear the regional waters of any criminal activities that could impact on EU trade and economic development. However, with no clearly articulated principles and objectives, and little emphasis on “ends, ways and means”, the document is less strategy and more a statement of noble intent. In fact, Europe’s plans for the mitigation of challenges in the Indian Ocean seem based on the same measures and tactics that it employed in the European seas, a space wholly dissimilar in context and circumstance from the Asian littorals.

The real dilemma that confronts EU strategic planners is that the high demands of security in Europe’s near-seas leaves little operational resource for other sensitive regions. This is one reason why the EUCAP mission (active since 2012) applies specifically to Somalia and why EU and NATO naval forces focus on the anti-piracy effort in the Horn of Africa and the refugee crisis in the Mediterranean.

Yet, European Union initiatives in the Indian Ocean are useful in their own way – a fact that Indian watchers do not seem to appreciate. The EU CRIMARIO project, for example, aims to raise situational awareness about potential risks in the wider Indian Ocean. As part of the Critical Maritime Routes (CMR) program, EU initiatives focus on capacity building, information sharing and legal assistance. Its programs help Indian Ocean coastal countries improve maritime situational awareness, maritime governance and interagency cooperation. The EU’s emphasis on facilitating sustainable development in areas such as energy, fisheries, and macroeconomic policies, allows regional powers like India to focus more on traditional security provisioning.

More importantly, the European Union is the principal sponsor of the Indian Ocean Commission (IOC), an inter-governmental organization comprising five Indian Ocean states: Comoros, Madagascar, Mauritius, Reunion and Seychelles, and one, which plays a key governance role in the Western Indian Ocean. There is also a Regional Integration Support Program (RISP 3) established under the European Development Fund (EDF) which contributes to the development of East and South Africa, enhancing stability and economic growth.

Even so, European programs do not seem to recognize the strategic dimension of Indian Ocean security. The recent rise in security threats in South Asia’s waters includes both conventional and irregular threats. The rising instances of trafficking, terrorism, pollution and overfishing accompany traditional challenges in the form of growing Chinese naval deployments in the sub-continental littorals, including submarines. As the principal security provider in the South Asian seas, the Indian Navy plays a key role in securing the regional seas, but suffers from a capacity-deficit in tackling the spectrum of challenges. The Navy’s key deficiency is the inability to track and deter PLA Navy submarine deployments in India’s near-waters. New Delhi finds its legitimate security concerns in South Asia being treated lightly by European analysts, who tend to view Indian recriminations as a hedge against China’s power-projection in India’s maritime neighbourhood. Europe likes to keep its interventions in South Asia security-light, as illustrated in its outreach to Sri Lanka, Myanmar and Bangladesh, where EU efforts are limited to fisheries assistance, humanitarian measures and post-crisis reconstruction.

This is not to suggest that Europe is indifferent to the geopolitics of Asia. The European Union has reached out to Southeast Asia, investing significantly in the Association of Southeast Asian Nations (ASEAN) integration projects. EU-ASEAN dialogues on piracy, maritime surveillance and port security, have discussed ways in which to forge a closer security engagement between European states and the ASEAN Regional Forum as a means to balance growing Chinese political and military influence. Yet, these discussions remain strictly confined to the seas east of Malacca. Indian observers suspect that European political watchers avoid discussing India’s security and developmental efforts in South Asia, because of the perceived competition with Beijing’s own initiatives. Not surprisingly, India and the EU disagree on the issue of China’s One Belt One Road (OBOR) – a massive port, highways and infrastructure-building project that many European states welcome, but which is widely perceived in India as a geopolitical plan to dominate South Asia and Europe.

Brussels and New Delhi are aware that the low-level law enforcement approach cannot serve as an effective substitute for high-level strategic convergence. The EU needs a longer-term mission, more comprehensive level of ambition, and more strategic partnerships, geared to the global challenges of maritime security. India needs a strategy to leverage the EU’s capacity-building projects in Asia’s littorals. The Indian Navy does after all cooperate extensively with the French Navy and the Royal Navy. It must work on a plan to translate its existing linkages with particular European states into an institutional relationship with the European Union. Ultimately, India-EU maritime security endeavours in the Indian Ocean Region will need be part of a larger economic and political project that comprehensively covers the entire scope of strategic challenges.

Abhijit Singh is a  Senior Fellow and heads the Maritime Policy Initiative at Observer Research Foundation (ORF), New Delhi. A former naval officer and maritime professional with specialist and command experience in front-line Indian naval ships, he has been involved in the writing of India’s maritime strategy (2007). He is a keen commentator on maritime matters and has written extensively on security and governance issues in the Indian Ocean and Pacific littorals. He tweets @abhijit227. Image credit CC/ EU NAVFOR Flickr

Reining In Pyongyang’s Nuclear Ambitions: Washington and Beijing’s Common Interests
America has a THAAD Missile Problem in Korea– It Must Move Quickly and Carefully to Resolve It