The ships are coming: The role of the Coast Guard and militia in maritime diplomacy

Home /Asia, China, Maritime Security/The ships are coming: The role of the Coast Guard and militia in maritime diplomacy 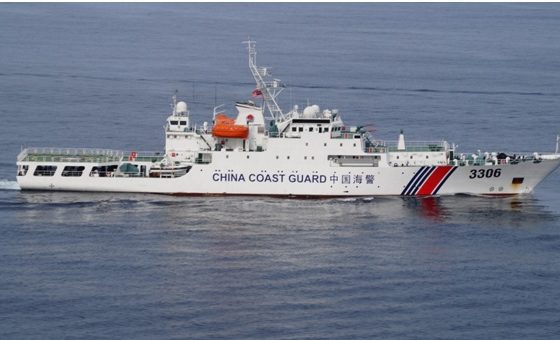 With four Chinese patrol vessels trespassing again into Japanese territorial waters off the Senkakus on 28 March, for the eighth time in 2017, China seems to be using every means at hand to assert sovereignty and expand its influence in the disputed maritime region.

China’s latest maritime strategy to expand influence in the East and South China Seas envisions a crucial role for fishermen, civilian ships and the Coast Guard. Fishermen are progressively playing a key role in China’s diplomacy and foreign policy. In this new pivotal role, fishermen will support the PLA Navy PLA(N) in national defence and force projection; and civilian ships will be built to quickly transition into military functions. China seems to be readying a second level of naval support – that of Coast Guard, fishermen and other maritime militia – which will perform HADR (Humanitarian Assistance/ Disaster Relief) functions, and if required, exhibit patriotism and be assertive enough to take the islands. They will aid China in its ‘island manufacturing’ strategy and at the same time, provide the PLA(N) with information on the activities of other countries in the South China Sea. The advanced units are trained for guerrilla warfare, “to confront foreign ships with sea mines and anti-air missiles”. Chinese sources predict that the South China Sea holds 150 billion barrels of oil and natural gas. The South China Sea also contains disputed islands like the Spratlys, the Paracels, the Pratas, Macclesfield Bank and Scarborough Shoal. China uses an “Island Factory” strategy in the South China Sea to strengthen her claims.

This article examines how neighbouring countries are responding to these Chinese actions. It also examines if these actions escalate tensions in the South China Sea and lead to a race in the region to build maritime self-defence capabilities.

In January 2016, China had almost completed building its Coast Guard vessel 3901, termed ‘The Beast’, with a displacement of 12,000 tonnes. In contrast, USS Lassen (the American guided missile destroyer that conducted Freedom of Navigation operations in the SCS and was rebuked by Beijing for entering the territorial waters of its artificial island) has a displacement of 9700 tonnes only. The Beast is claimed to “carry 76 millimeter rapid fire guns, two auxiliary guns and two anti-aircraft machine guns”. Such Coast Guard or civilian law enforcement vessels are used to stake China’s territorial claims and change the status quo on the ground, without involving the formal authority of the navy to project power. Maritime militia (trained fishermen) are provided with GPS, radios, fuel subsidies and other rewards, so that they serve as an early warning system to the Chinese PLA Navy.

With the rapid build-up and training of its maritime militia and Coast Guard, China will have a proactive force that is HADR-ready. This will be of benefit to its South East Asian neighbours, in quickly responding to natural disasters like Typhoon Haiyan or the Asian tsunami and crises like the search for the missing MH 370 aircraft. Erickson and Kennedy cite the example of the Taizhou maritime militia which in 2014 alone “conducted over 136 search and rescue missions and successfully rescued 18 vessels and 286 people”. These trained fishermen could also report on changes in weather conditions and resource availability.

However, such a continued presence of civilian and Coast Guard ships also scares away fishermen from neighbouring countries or causes skirmishes and rivalries. With Chinese Coast Guard constantly patrolling the Scarborough Shoal, Filippino fishermen have had to constantly endure harassment.

Such a Chinese use of civilian ships and the Coast Guard has set off a race among its neighbours to acquire self-defence capabilities. In April 2016, Japan deployed 12 Coast Guard ships to exclusively patrol the Senkaku islands. These included ten 1500-ton and two helicopter-equipped patrol ships. Australia donated two Balikpapan-class Landing Craft to the Philippines. Indonesia is helping the Philippines build Strategic SeaLift Vessels (SSV). India extended a line of credit to Vietnam to acquire naval patrol boats. The Philippines has also developed a Coast Watch System to monitor vessels in the South China Sea. On 6 June 2015, Taiwan’s Coast Guard Administration (CGA) inducted two 3000-ton patrol ships, Yilan and Kaohsiung, to “boost maritime patrol and search-and-rescue operations, to protect Taiwanese fishing boats and fishermen and to assist in combating illegal poaching activities”.

Maritime incidents or skirmishes are now likely to escalate at a rapid pace and greater efforts will be required to return to status quo. The Chinese oil rig placed in Vietnam’s waters (near the Paracels) in May 2014 was an incident that saw the involvement of Coast Guard ships and fishing vessels from both countries. Incidents of ramming and spraying with water cannons were frequent, which later led to the sinking of a Vietnamese fishing vessel.

The Center for Strategic and International Studies’ China Power programme says that “of the 46 major incidents identified in the South China Sea between 2010 and 2016, at least one Chinese Coast Guard (or other Chinese maritime law enforcement) vessel was involved in 72 percent of incidents”.

The use of civilian ships and the Coast Guard for incrementalism and to project power in the disputed maritime areas, leaves the picture very hazy and the resolution of incidents progressively difficult for individual governments in the region. The Code for Unplanned Encounters at Sea (signed by 21 countries, including China, in 2014) applies only to naval vessels and keeps out of its ambit the Coast Guard and other maritime law enforcement vessels. Regional governments need to be focused on dialogue and resolution rather than a rapid build-up of Coast Guard and civilian fishing vessels. Asserting one’s claims in a muscular fashion is not the conduct of responsible, global order-adhering states.

Nuclear War on the Korean Peninsular: What the U.S. expects from China
Introduction to Special Issue on China and Sport