The Strategic Challenges of a Nuclear North Korea 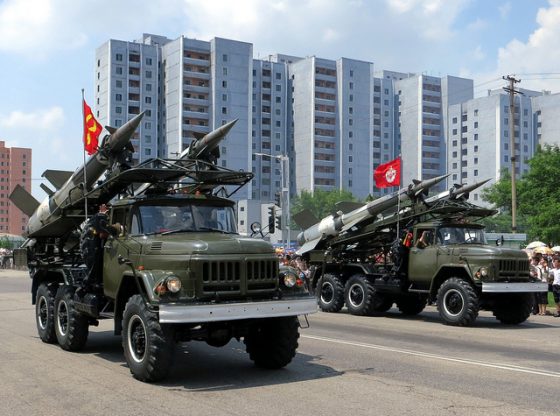 North Korea’s nuclear and ballistic missile programs continue to trigger strategic anxiety in Asia. Since embarking on a nuclear program in the 1950s, Pyongyang has acquired weapons of mass destruction that can hit targets well beyond the Korean peninsula. The strike radius of the DPRK’s weapons of mass destruction (WMD) forces has steadily expanded since the 1990s, with analysts focusing on the country’s emerging capacity to strike targets on the continental United States. Pyongyang has successfully demonstrated a space launch vehicle capability, which is a critical pre-requisite to acquiring an intercontinental ballistic missile (ICBM).

…it seems credible to assume that North Korea will be able to field a nuclear-armed ICBM force within three to five years.

Given the impressive trajectory of North Korea’s long-range missile program thus far, coupled with the regime’s declared aspiration to strike the US and its allies, it’s almost certainly only a matter of time before the DPRK acquires an operational ICBM. It is no mean feat to miniaturise a nuclear warhead, but in light of North Korea’s proven track record in the nuclear domain, coupled with its hardcore determination, it must be getting close to achieving this breakthrough capability. Indeed, the declared consensus among South Korean and US officials is that Pyongyang has already attained this threshold. These concerns have been magnified recently with reports that the North is actively working on a thermonuclear capability as part of its testing program which, if successful, would dramatically multiply the explosive yield of its nuclear forces.

The DPRK has not been afraid to risk public failure in its missile testing program, but observers are wrong to assume this confirms that Pyongyang is incapable of achieving its holy grail of an ICBM that can strike the continental US. Throughout history, all long-range missile programs have been characterised by testing failures. But for determined countries, over time, a j-curve effect emerges where initial failures are replaced by more consistent successes. In terms of prestige, resources, and sheer political will, successive North Korean regimes have invested much in the country’s missile testing programs, and the j-curve effect is already apparent. Estimates vary, but it seems credible to assume that North Korea will be able to field a nuclear-armed ICBM force within three to five years. Short of a regime collapse in Pyongyang or war on the Korean peninsula, there appears to be nothing that will prevent this from materialising.

How will the world react to North Korea acquiring a nuclear-armed ICBM force? Washington and Beijing have essentially proven themselves unwilling to address this issue.

Despite occasionally tough talk, the US has balked at using military force against North Korea’s WMD assets, instead opting to spearhead a sanctions campaign that has yielded no evident change in Pyongyang’s behaviour. Tortured discussions in the US think tank community about possible ‘grand bargains’ with Pyongyang to persuade it to disarm its nuclear forces recycle similar proposals that were tried (and failed) in the past. Donald Trump’s recent warning that he intends to ‘solve’ the North Korean nuclear issue is little more than empty rhetoric without an integrated policy approach on the part of his administration.

China for its part has gone through the motions of chastising North Korea for its defiance of UN resolutions regarding nuclear and missile testing, but Beijing has not shown any real leadership in exerting significant pressure on the Kim Jong-un regime to wind back its WMD ambitions. Indeed, China’s leverage over Pyongyang today seems to be at an all-time historical low and there is little appetite in Beijing to seriously confront Pyongyang over its nuclear and missile programs.

The failure of the two major powers to deal with North Korea has left a highly problematic strategic legacy for other states in the region. Assuming North Korea moves over the next few years to acquire a nuclear-armed ICBM force, US allies in the region will be forced to confront some difficult questions concerning the credibility of American extended deterrence.

Possessing a new-found capacity to inflict a nuclear strike on the US homeland, Pyongyang may well gain the strategic initiative in any crisis in Northeast Asia, forcing US decision makers to think twice about the risks they are prepared to take in pushing back against North Korean coercion directed at allies. This risk aversion would probably be accentuated as uncertainty grew regarding the precise location of North Korean mobile ICBM assets that could be targeted in any initial or retaliatory strike by US forces. Put simply, if US decision makers were not confident they could destroy all of the DPRK’s ICBM assets in a pre-emptive first-strike, they would be less inclined to put themselves in a position where they had to execute such a strike to uphold the credibility of American extended deterrence.

This is bad news for America’s Asian allies for two reasons.

The first and most obvious is that they will be increasingly vulnerable to North Korean coercion. Japan and South Korea seek regular extended assurances from Washington, and these demands have become more acute as the DPRK has become more emboldened in its nuclear and missile testing programs. Should Tokyo and Seoul sense that the credibility of US assurances is declining, they may well feel they have little choice but to accommodate North Korean demands, particularly if Beijing remains supportive of Pyongyang. Such a shift would probably be incremental rather than overt, and it may even be occurring now. The Trump administration’s sharply mixed messages over the value it places on alliances – and the blood and treasure it is willing to commit to defending these allies as it ‘puts America first’ – have only exacerbated existing regional doubts.

The second, perhaps less obvious, reason why North Korea’s nuclear-armed ICBM is bad news for US allies is that it will force them to reflect very carefully on their own strategic options. Japan’s threshold nuclear capability has been widely canvassed and while South Korea’s acquisition of nuclear weapons would be a tall order technologically, the country had an active weapons program in the 1970s and today possesses a high level of nuclear expertise by virtue of its civilian program. Neither country wants to confront the nuclear option, and one of the major virtues of US extended deterrence from the perspective of Tokyo and Seoul is that it has effectively neutralised the indigenous nuclear weapons option as a serious strategic conversation. We may have entered a period when this is about to change.

Andrew O’Neil (@oneil_ak) is Professor of Political Science and Dean in the Business School at Griffith University. Image credit: CC by Stefan Krasowski/Flickr.

Xi Jinping’s Football Dream and the Nightmare Scenario
Xi meets Trump: how charisma and personality can ensure peace and prosperity