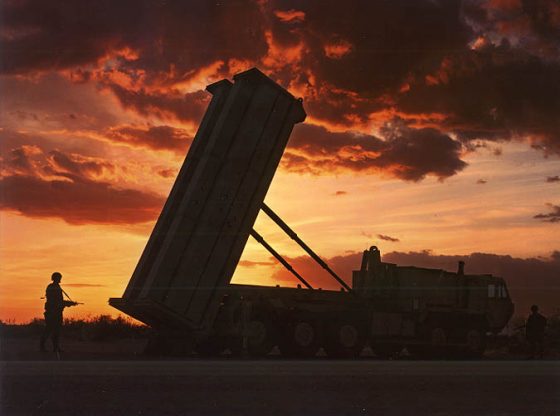 As North Korea’s nuclear weapon and ballistic missile capabilities continue to grow, South Korea, the United States, and Japan struggle to find ways to deal with this growing threat. One of the answers has been ballistic missile defense (BMD). Washington has been constructing a regional BMD system that includes Aegis destroyers equipped with SM-3 surface-to-air missiles. These ships are based in Japan but move to Korean waters to monitor North Korean missile tests and could shoot them down if ordered.

Japan has been an eager contributor to this effort having its own Aegis destroyers equipped with SM-3 interceptors and plans to build more ships with these capabilities. South Korea also has Aegis destroyers but they do not have the SM-3 missile. Instead, it has opted for an independent BMD system, Korea Air and Missile Defense consisting of Aegis destroyers equipped with the SM-2, an interceptor that is designed for anti-ship and air defense missions. Plans are in the works to build more Aegis ships and equip them all with the SM-3. In addition, South Korea has ground-based PAC-2 interceptors with plans to purchase the more capable PAC-3 missile. South Korea’s reluctance to join the U.S. BMD system has been due, in part, to cost but more importantly, China’s opposition to BMD.

The most recent addition to regional BMD has been the deployment of the ground-based Terminal High Altitude Area Defense (THAAD) system. THAAD is capable of reaching ballistic missiles at higher altitudes and earlier in the missile’s trajectory than other ground-based systems such as the PAC-2 and PAC-3. In response to North Korean threats, the U.S. military deployed the THAAD system to Guam in 2013 and the Chinese Foreign Ministry was quick to voice its opposition: “The deployment of anti-missile systems in the Asia-Pacific and seeking unilateral security is not beneficial to strategic stability and mutual trust in the region. It is not beneficial to peace and stability in Northeast Asia.”

US Forces Korea Commander General Curtis Scaparrotti first proposed deployment of a THAAD battery to South Korea in June 2014. Deputy Assistant Secretary of State Anita Friedt argued, “developing an interoperable regional missile defense architecture is an important future area of focus in light of the increasing nuclear and missile threats posed by North Korea.” Further discussions ensued but the following spring during a visit to Seoul, U.S. Secretary of Defense Ash Carter stated there were no formal plans for talking about a THAAD deployment to South Korea. For a time, Seoul held off on THAAD deployment. Former ROK President Park Geun-hye had worked hard to build good relations with China to further close economic ties and secure Beijing’s help in addressing the North Korea problem. Deploying THAAD would damage the progress she had made in improving bilateral relations.

When Pyongyang conducted its fourth nuclear test in January 2016, China’s response was far less than South Korea had hoped for. Consequently, Seoul announced that THAAD was back on the table. As planning for the deployment progressed, a curious pause occurred when Seoul and Washington announced that their THAAD talks were on hold, an apparent concession to Beijing for its support of a tougher UN sanctions resolution [UNSCR 2270]. The resolution imposed restrictions on the sale of coal, gold, iron, and rare earth metals along with providing greater authority to inspect ships bound to and from North Korean ports. Yet, despite this apparent concession, talks resumed and on July 8, 2016, South Korea and the United States announced their intention to deploy THAAD.

Soon after, China made clear its anger over the decision, with Foreign Minister Wang Yi protesting: “The recent move by the South Korean side has harmed the foundation of mutual trust between the two countries.” Chinese officials have raised numerous objections to THAAD and the U.S. BMD architecture in Asia, complaining it degrades China’s nuclear deterrent and that THAAD’s radar system will be useful for peering into its strategic space. ROK and U.S. officials have tried to convince Beijing that BMD is directed only against North Korea. However, Chinese leaders believe North Korea provides a convenient justification to deploy assets to the region that are actually directed at them or at least, have the benefit of countering both Beijing and Pyongyang. No doubt, U.S. planners are well aware that China is a side benefit of the THAAD deployment.

The explanation for China’s vehement opposition may be more political than military. Beijing likely understands the limits of the military capabilities of THAAD and BMD. Yet the chief concern may be that the deployment of THAAD represents an incremental step to South Korea joining the U.S.-led regional BMD system, a step it has so far resisted, and to greater trilateral cooperation with Japan. China has worked hard to pull South Korea away from the United States and THAAD represents further integration of the alliance.

China’s response to the THAAD deployment has been more than words. Beijing has retaliated against ROK companies that do business with and in China, restricted travel and tourism to South Korea, and canceled K-Pop concerts in China. Lotte has been a particular target since turning over the land for deploying THAAD.

As Chinese pressure grew, the Park administration shot back. One spokesman declared “this is a matter we will decide upon according to our own security and national interests. The Chinese had better recognize this point.” After making the decision, Park defended the move as an “obligation to protect our people and nation.”

With Park’s impeachment, there has been speculation that the new ROK president, who is likely to be a progressive, might reverse the THAAD decision. Indeed, the United States began its deployment of THAAD in March, earlier than expected, most likely to beat the May 9 presidential election, making it more difficult to undo the decision.

South Korean public opinion will also be a factor. A recent poll by the Asan Institute, a think tank in South Korea, showed that on a scale of zero to ten, from January to March 2017, China’s favourability rating among South Koreans dropped from 4.31 to 3.21 percent, a number that is lower than Japan’s rating of 3.33. These numbers are likely a backlash to Chinese pressure over THAAD. In addition, public support for THAAD among the ROK public grew from 46.3 percent to 50.6 percent, since these numbers were last taken in November.

THAAD’s future in the months ahead is uncertain. There is a chance the deployment could be reversed after the May election, but it seems unlikely at the moment. Public opinion appears to show sufficient support for the move, and North Korean actions will continue to stoke the fears that drive THAAD support.

Chinese retaliation is certainly taking a toll on South Korean businesses but Beijing is generating a good deal of blowback and feeding the wariness many in South Korea already have over potential bullying from a rising China. South Korea confronts a serious strategic dilemma as its economy relies on China while depending on the U.S. alliance for its security. THAAD is an example of how this geopolitical tug-of-war might play out and the challenges South Korea will face in the future managing its big power relations.

Terence Roehrig is Professor of National Security Affairs and Director of the Asia-Pacific Studies Group at the U.S. Naval War College. The views expressed here are the author’s alone and do not represent the views of the U.S. Government, the Department of Defense, or the Department of the Navy. Image credit: CC by Wikimedia Commons.