North Korea-Russia Relations: Limitations Behind the Façade of Friendship 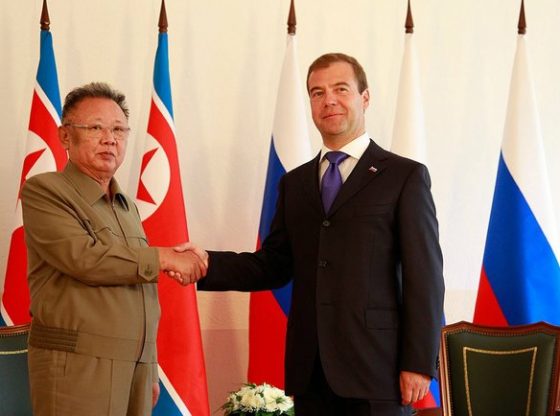 Despite the North Korean state ideology of juche (“self-reliance”), the DPRK has long depended on either China or Russia as its most important international partner. In light of China’s recent curtailment of its support for North Korea, coinciding with an uptick in North Korea-Russia relations, a common supposition is that Russia is once again taking pride of place in North Korea’s international collaborators. There is little doubt that Russia is making sincere attempts at building a partnership with North Korea. North Korea and Russia declared 2015 to be a “Year of Friendship” between the two countries. The two countries have also signed various agreements, such as a treaty that will make it easier for Russia to return North Korean defectors to the DPRK.

The idea that Russia is once again superseding China as North Korea’s major international patron bodes well when viewed through the prism of North Korea’s Cold War-era tactics of playing China and the USSR off of each other. Likewise, increased Russian support for North Korea coincides with the paradigm that Russia would back countries that are opposed to US power for the sake of diminished American clout in foreign affairs. Nevertheless, the realities of new developments in North Korea-Russia relations contrast with the Cold War era, when Russia (then, the Soviet Union) had no diplomatic ties with South Korea.

Russian military expert Alexei Leonkov warns that Russia may limit its economic cooperation with South Korea in response to THAAD. Such a course of action, however, does not coincide with recent developments in Russia’s ties with South Korea, which have generally been quite positive.

The current nature of DPRK-Russia ties is not based on ideology as in the past. Russia often touts the creation of a “mutli-polar world”, and many official statements on Russia’s relations with China allude to this as being an important part of Sino-Russian relations. Yet Russia’s main purpose in its ties with the DPRK are driven more by a Russian desire to develop and securitize its Far Eastern regions. Russia, in particular, values its geographic access to North Korea as a way to reach broader global markets through the Greater Tumen Initiative, and utilizes its cordial relations with Pyongyang to strive for a non-military solution to the North Korean nuclear standoff.

One of the current pressing issues that reveals the complexity of Russia’s policy toward North Korea is the deployment of the US military’s Terminal High Altitude Area Defense (THAAD) to South Korea. Russia has vowed to coordinate a response to THAAD with China, yet Russia has taken a divergent approach from China in dealing with the missile defense system as far as policy toward the Korean Peninsula is concerned. Specifically, Russia has been cautious about jeopardizing its relationship with South Korea, a sworn foe of the DPRK and staunch ally of the United States.

As counter-intuitive as it seems, rather than bolstering DPRK-Russia ties based on a common cause, THAAD actually reveals the limits of North Korean-Russian cooperation. Russian diplomats and lawmakers have been vocal about their opposition to THAAD and its potential consequences for Northeast Asian security. The Russian foreign ministry has declared that THAAD will complicate the resolution of the ongoing Korean security crisis, while Konstantin Kosachev of Russia’s Federation Council asserts that THAAD will provide North Korea with an incentive to continue its nuclear program. Such statements from Moscow indicate serious Russian apprehension about a nuclear-armed North Korea.

Although North Korea and Russia have also expressed a desire for closer military engagement, nothing substantial has yet come to fruition, particularly nothing that could be seen as opposing South Korea. Rather than opposing South Korea, Russia’s general response to THAAD has been to focus more directly on its implications for Russia’s ties with the United States. Viktor Ozerov, chairman of the Federation Council’s defense committee has asserted that THAAD’s installation in Korea may be sufficient grounds for Russia to withdraw from the New Strategic Arms Reduction Treaty (New START). Ozerov indicated that the Russian General Staff was conducting an analysis of the feasibility of this course of action.

Russia’s ability or (un)willingness to pressure South Korea regarding THAAD is also compounded by a strong Russian desire to increase commercial ties with South Korea. Immediately at the end of the Cold War, the USSR for all intents and purposes turned its back on North Korea, seeing continued partnership with the Communist state as being of little benefit for a Soviet rump state, the Russian Federation, seeking to rebuild itself. Russia promptly established diplomatic relations with South Korea. After a somewhat clumsy start to Russia’s relations with both Koreas, Russia has since pursued a policy of balancing the two polities on the Korean Peninsula.

Russian military expert Alexei Leonkov warns that Russia may limit its economic cooperation with South Korea in response to THAAD. Such a course of action, however, does not coincide with recent developments in Russia’s ties with South Korea, which have generally been quite positive. In the autumn of 2016, during a plenary session of the Eastern Economic Forum, South Korea’s then-president Park Geun-hye announced that Russia and South Korea were considering implementing a free trade agreement between the Republic of Korea and the Eurasian Economic Union. From the Russian end, the Russian ambassador to South Korea, Alexei Timonin, praised South Korea as an important partner for Russia, and expressed hopes that the two sides could continue their partnership despite disagreements over THAAD.

Russia, therefore, values North Korea as a partner, but must approach the DPRK with a degree of caution. As the standoff over THAAD worsens, several factors, including developments in South Korea’s domestic politics, will affect the future course of North Korea-Russia relations. Nevertheless, Russia’s ties to South Korea will continue to be one of the biggest factors in determining the course and nature of DPRK-Russia relations. As much as Russia values its partnership with North Korea, it takes care not to neglect its relations with the Republic of Korea. Thus, in order for Russia to realize its broader goals in Northeast Asia, Russia must continue to deal with two different political entities on the Korean Peninsula, a less-than-ideal situation for Russia.

Anthony “Tony” Rinna (@TonyVRinna) analyzes the interactions between Russia and Eurasia (particularly Mongolia) and the Korean Peninsula for Sino-NK. In particular, he is interested in DPRK-Russia economic and security ties, and the wider effects of DPRK-Russia bilateral ties in Northeast Asia as a whole. He has served with various policy institutes such as the Foreign Policy Research Institute and the Project for Nuclear Awareness. He has lived in South Korea since 2014. Image Credit: CC by Wikimedia Commons.