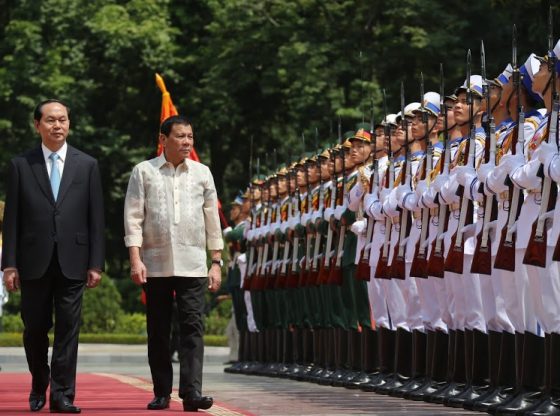 Hailed as one of Forbes Magazine’s 2016 most powerful people, President Rodrigo Duterte of the Philippines continues to draw international attention by virtue of his unorthodox domestic policies and foreign policy reconfiguration. Duterte’s war on drugs, which has resulted in the death of thousands, has been denounced by the Philippine political opposition as well as Western states and institutions for alleged human rights abuses and rule of law violations. Internationally, Duterte has emphasised a preference for an “independent foreign policy,” which coincided with the deterioration in Philippine-U.S. relations amid calls by the Obama administration to stop drug-related extra-judicial killings.

Signs of diplomatic and political regress manifested in Duterte’s public pronouncements against the United States and the recent trajectory of Philippine foreign policy management. First, Duterte disassociated himself from the United States through a series of critical statements against former U.S. president Barack Obama and the American diplomatic establishment. In particular, Duterte voiced his distaste for American hegemonic, interventionist impulses, and repeatedly sensationalised the so-called “American decline.” He also lent approval to a new world order led by China and Russia, thus possibly raising the legitimacy of a new power structure that is Asia-centric and multipolar.

Second, bilateral diplomatic coordination against China in relation to the Permanent Court of Arbitration (PCA) ruling on the South China Sea in regional institutions has ceased. During the ASEAN and East Asia Summit in Vientiane last year, Duterte refused to bring up the South China Sea issue, or flaunt the PCA decision awarded in favour of the Philippines. In fact, in an attempt to rebalance security relations with the United States, the Philippine defence establishment even stated that the United States is “on its own” in conducting freedom of navigation operations (FONOPS) in the South China Sea. This announcement terminated the likely prospect of a joint FONOPS in the South China Sea, which was already a prearranged enterprise during the Aquino administration.

Duterte’s brand of independent foreign policy is a mix of non-intervention by and non-subordination to the West, and the deepening of diplomatic and strategic relations with non-traditional partners. A balanced foreign policy, on the other hand, may be defined as the diversification of major strategic and economic partnerships through sustained accommodation, multiple engagements, and hedging behaviours toward “traditional” and “non-traditional” partners. Therefore, an independent foreign policy, in accordance with Duterte’s definition, may not necessarily be a balanced one, because a state may be overly dependent on one major power after another.

Duterte’s own statements in this area often cause unnecessary obfuscation and undo the purpose of diversification. In part, this practice rests on Duterte’s “statements of inclination” and “statements of retraction.” First, statements of inclination suggest signs of diplomatic partiality and preferential treatment e.g. public pronouncements of “crossing the Rubicon [digressing from the United States],” “veering towards China,” and “alignment of ideological flow [with China and Russia].”

Second, statements of retraction were exemplified in Duterte’s speech in China where he stated that he intends to disengage from the United States, but only to clarify later on that he did not mean a “severance of ties” but merely a “separation” of foreign policy. Likewise, his statement in Japan in January where he mentioned that “all there was, was economics” in allaying fears of entering into an alliance with, and buying military hardware from China, was in stark contrast to earlier pronouncements of plans to acquire weapons from Beijing. Duterte deliberately made these statements to send mixed signals, a natural strategy of creating strategic ambiguity in international politics. However, making statements of inclination and retraction can also diminish a leader’s sense of credibility.

To prevent the loss of credibility, establishing strategic ambiguity should be done through actions and not rhetoric. The Philippines’ decision to step up engagement with China is proper and valid, but it should not come at the expense of risking relations with traditional friends and partners. Notably, both Vietnam and Malaysia, while strengthening strategic partnerships with China, were also parties to the Trans-Pacific Partnership (TPP). Similarly, Japan, while seeking a rapprochement with Russia, continues to maintain a robust alliance with the United States.

Will Philippine-American Relations Be Great Again?

There are two keys to rejuvenating Philippines-U.S. relations. First is by adopting a new bilateral action agenda that subsumes broadened shared security conceptions and new priority areas in the face of evolving domestic politics in the Philippines, changing dynamics in Sino-Philippine relations, and the broader set of local and international non-traditional security challenges. This is to ensure a sustained, enduring, and relevant alliance that is non-linear and not centred on security issues such as joint patrols and military exercises. The agreement by the Philippines-U.S. Mutual Defense Board-Security Engagement Board in November last year to refocus close cooperation on national security interests to include humanitarian assistance and disaster relief, counter terrorism, cybersecurity, and maritime security is a step in the right direction.

The second key is to further deepen the other cornerstones of the relations and preexisting patterns of cooperation as evidenced by the large number of bilateral mechanisms and strong economic and people-to-people ties. For the United States to maintain a strong and positive influence in the Philippines, Washington may relent to certain measures that allow China and Japan to become more active stakeholders in the Philippines’ current domestic agenda. For example, Beijing has committed to building massive drug rehabilitation centres in the Philippines and unswervingly expressed willingness to supply light arms in support of Duterte’s anti-narcotics operations and counter-terror efforts.

In the case of Japan, bilateral relations maintained a state of normalcy owing to the fact that Tokyo was more calibrated in issuing statements – and also pledged supportive initiatives – on Duterte’s war on drugs. In Duterte’s state visit to Tokyo last year, he resolutely welcomed the idea of having joint patrols with Japan, and even described the country as “a special friend who is closer than a brother.” The message that could be drawn here is that there are many ways of handling bilateral differences over issues such as human rights, just as there are different ways of managing altercations in the South China Sea. Thus, the United States may do more to highlight trade and economic ties in the bilateral relations, and augment investments in infrastructure, which is now one of the Duterte administration’s foremost domestic priorities and something that the Philippines badly needs.

With respect to Duterte, his rhetoric may continue to be a source of uncertainty and diplomatic, political, and strategic risk to the U.S., particularly if domestic issues will be brought up and if the extent of Duterte’s accommodation and engagement with China and Russia will be taken into account. Yet, as the United States changes its attitude on Duterte’s war on drugs and human rights issues under Donald Trump, the Philippines and the United States may see improved diplomatic and political relations moving forward. But, in the event of strained Sino-U.S. political and economic relations, the Philippines might be pressed to play a more balanced role in managing relations with both major powers.

Aaron Jed Rabena is an Associate Fellow at the Philippine Council for Foreign Relations (PCFR) and a Fellow at the Ateneo Teehankee Center for the Rule of Law. He is also a member of the Asia Society Philippines and the Philippine Association for Chinese Studies (PACS). He can be contacted at aaronrabena@gmail.com.