Deliberate, Not Desperate: The Philippines’ National Security Strategy on the West Philippine Sea 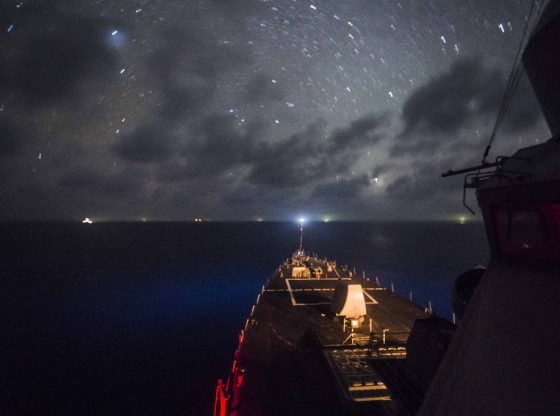 There were arguments that the Philippine government should not have solely relied on international courts to manage the country’s most pressing national security concern: the maritime disputes in the West Philippine Sea (otherwise known as the South China Sea).  Some commentators pointed out that the Philippines depended heavily on other countries (particularly the United States), that the government seemed complacent and lax in handling the disputes, that Filipinos could never retrieve the West Philippine Sea, and that the country was lacking external security and losing in its strategy. However, what these commentators missed was that filing an arbitration case against China formed only one part of a broader strategic framework. Indeed, the legal approach was not out of desperation but a deliberate component of the Philippine strategy on the West Philippine Sea.

The Philippines did not simply bring China to court. Even before filing the case, the government had already wisely chosen to settle the dispute with an Arbitral Tribunal under Annex VII of the United Nations Convention on the Law of the Sea (UNCLOS), with a registry at the Permanent Court of Arbitration (PCA), rather than with the other international courts listed by the Convention. Unlike in those other courts, states influence the ad hoc selection of the judges in the Arbitral Tribunal: disputants each choose one tribunal member and agree on the remaining three from a closed list of potential members, making a total of five tribunal members. The Philippines naturally appointed a judge who espoused an aligned jurisprudence. Meanwhile, China refused to participate in the entire process, thereby relinquishing its privilege to appoint a judge. The President of the International Tribunal for the Law of the Sea (ITLOS) appointed the other four tribunal members instead, as per UNCLOS.

As it awaited the decision, the government also enlisted the help of the international community to make China abide by the eventual ruling. Since the submission of the case in 2013, Philippine diplomats had been engaging their counterparts in their countries of assignment to support the country’s position. By asking for support, the Philippines created an international pro-compliance constituency that China could not ignore. The strategy had been historically tested: rallying the international community can tame intransigent states. In Nicaragua v. United States, Nicaragua successfully lobbied the UN General Assembly to adopt a resolution that the United States comply with the ruling of the International Court of Justice. Similarly, in Netherlands v. Russia, Greenpeace (whom Holland represented in filing the case) generated enough international attention that Russia eventually released the detainees.

Arbitration fell under the legal track of the government’s three-track approach to the disputes. During this period, the Philippines maintained multilateral cooperation with regional stakeholders through ASEAN—the political track—and continued bilateral discussions with China—the diplomatic track. Apparent failures in the political track (the failure of ASEAN to issue a joint communiqué on the South China Sea disputes) and the diplomatic track (a stalemate in the bilateral consultations with China on the disputes after the standoff at Scarborough Shoal) in 2012 had ultimately prompted the Philippines to file the arbitration case in 2013, but this did not preclude it to continue engaging with ASEAN and China.

Indeed, there had also been improvements on these two tracks. On the political track, ASEAN had been identifying developments in the South China Sea as a cause of regional concern in its joint communiqués since 2013. On the diplomatic track, the Philippines maintained bilateral discussions with China on other, non-contentious issues. In fact, in terms of economic relations, the Philippines’ total trade with, foreign direct investment from, and official development assistance from China since 2013 had indicated no clear sign of deterioration.

The government’s overall diplomatic strategy included a defence plan as well. The Philippines embarked on strengthening its defence relations with allies while improving its own military capabilities. On defence relations, the Philippines, among others, adopted the Enhanced Defense Cooperation Agreement with the United States, began negotiations for a defence agreement with Japan, and signed a strategic partnership agreement with Vietnam. On defence-capability improvement, spending for the security sector had generally increased since 2010 when President Benigno S. Aquino III assumed office. In fact, in 2013, real defence spending exceeded three billion USD at 2014 prices for the first time in history. This growing appropriation, in turn, allowed the Armed Forces of the Philippines (AFP) to continue modernizing its assets.

Filling In the Gap in Public Diplomacy

The Philippine strategy on the West Philippine Sea was therefore a comprehensive package of legal, political, diplomatic, and defence approaches. Yet, as noted above, Filipinos might not have necessarily viewed it as such. The salience of negative perceptions pointed to a gap in the efforts of the Department of Foreign Affairs (DFA) to communicate the Philippine strategy on the disputes, a gap that could have been remedied through more public diplomacy. For its part, the DFA had been keen to explain the legal approach to the domestic public. For instance, the department’s spokesperson had been going around the country to discuss the arbitration case with local stakeholders. But, in addition, there should have been efforts to support local government units—especially those that administer the contested areas—and educational institutions to conduct information campaigns on their own. There should have been a wider presence in social media, too. In terms of content, the government’s legal efforts could have been contextualized in the bigger picture of Philippine strategy, because the connection might not necessarily have been automatically construed. Ultimately, there should have been extra effort to convince the domestic public that going to arbitration was the country’s best option, as the alternatives—multilateral balancing through ASEAN, bilateral negotiations with China, and, most especially, military confrontation—indicated slim success at that time. Moreover, past efforts indicate that there are improvements on the political, diplomatic, and defense aspects. After all, the flexibility of the Philippine strategy made it possible to pursue different avenues simultaneously.

Taiwan’s Truth and Reconciliation Committee: The Geopolitics of Transitional Justice in a Contested State.
Diplomatic Engagement and Negotiated Agreement between the Philippines and China: A Constructive-Realist Approach in Post-Arbitration