Taiwan’s Truth and Reconciliation Committee: The Geopolitics of Transitional Justice in a Contested State.

Home /China, Taiwan/Taiwan’s Truth and Reconciliation Committee: The Geopolitics of Transitional Justice in a Contested State. 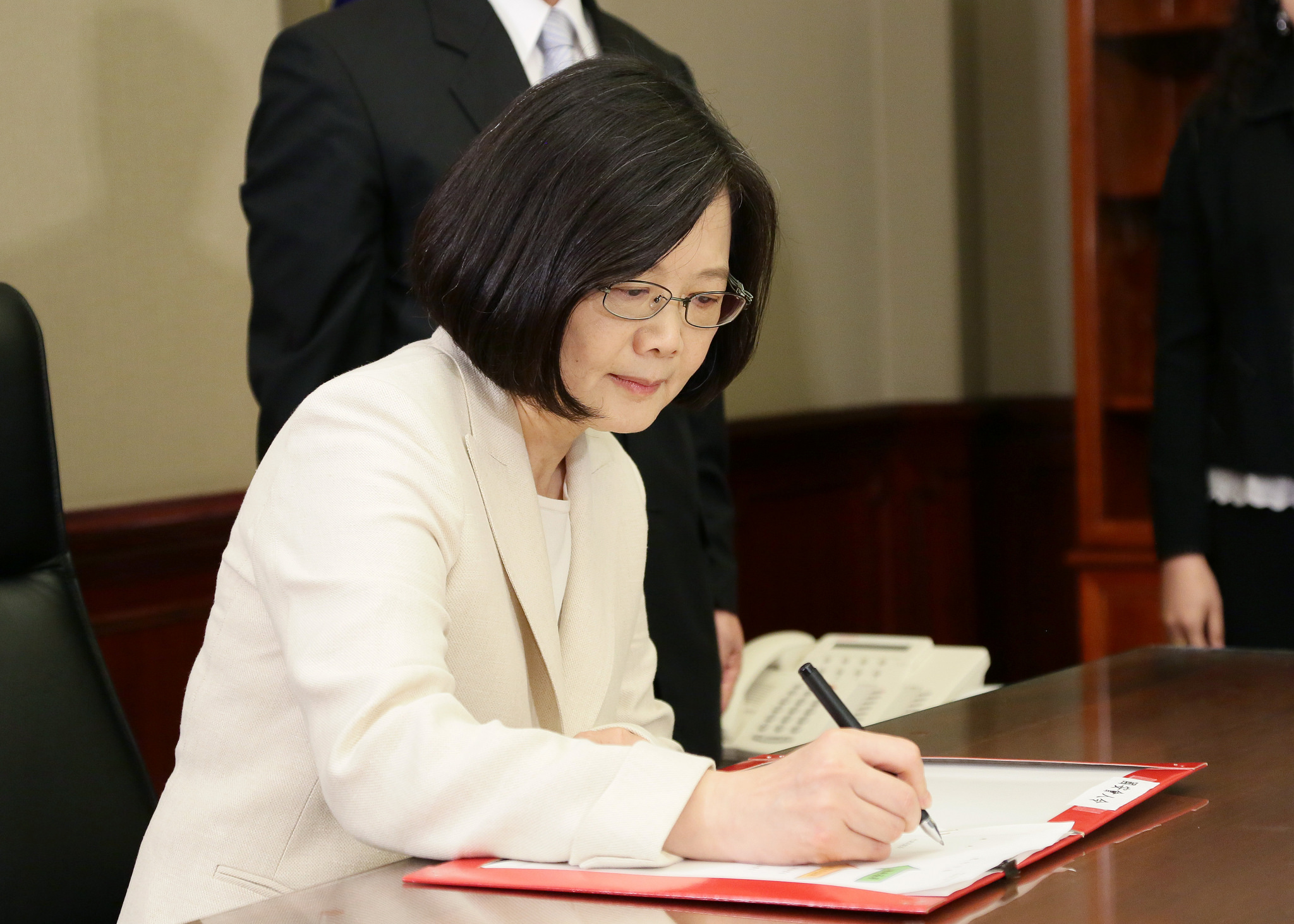 On 20 May 2016, Tsai Ing-wen, the chair of the Democratic Progressive Party (DPP), was inaugurated as the president of the Republic of China (ROC) on Taiwan. During her inauguration speech, she announced that she planned to set up a truth and reconciliation commission (TRC) inside the presidential office. ‘For the new democratic system to move forward,’ she said, ‘we must first find a way to face the past together.’ She continued by remarking that, ‘The goal of transitional justice (TJ) is to pursue true social reconciliation, so that all Taiwanese can take to heart the mistakes of that era.’

Tsai’s speech was preceded by a nationally televised, bilingual Mandarin Chinese and English performance that condensed 400 years of Taiwanese history into a 30-minute song and dance routine called ‘The Light of Taiwan.’ Setting the cultural stage for the incoming administration, the show featured stylised re-enactments of martial-law-era atrocities. The performance evoked the deepest scars in modern Taiwan’s political history, the 228 Incident of 1947 and the subsequent White Terror, when thousands of Taiwanese were killed by the Chinese Nationalist Party (KMT) regime that ruled Taiwan as a party-state under martial law until 1987. In the show, soldiers pointed bayonets at crouched figures that crumpled to the ground in slow motion.

This speech and performance present a puzzle for TJ scholars. Why has the new leadership in Taiwan only recently announced the intention to establish a TRC under the banner of TJ? Moreover, what does this call for a TRC tell us about the ways that leaders use TJ interventions for political ends?

We argue that Tsai’s rationale for calling a TRC does not belong exclusively to a single domestic, regional or international domain. Although her speech focused largely on domestic issues, we suggest that Tsai’s interest in a TRC also reflects Taiwan’s contested space in the global world order of nation states. Specifically, we read Taiwan’s unsettled national definition and its fraught and dangerous relationship with the People’s Republic of China (hereafter PRC or China), which threatens to take Taiwan by force, as the subtle geopolitical foil underlying many passages of her speech. Tsai’s call for a TRC was a sharp contrast with the deafening quiet across the Taiwan Strait, where Chinese government officials and state media marked the 50th anniversary of the violence and depredations of the Cultural Revolution with muted, terse statements.

Taiwan’s call for a TRC reflects the new executive’s broader goals to address the un-redressed violence of the ROC’s past and the contemporary structural and cultural legacy of the KMT party-state, as well as to distinguish itself from China by signalling that it is a democratic nation. As a tool to legitimate the new regime, and one with international visibility, Taiwan’s incipient TRC has the potential not only to reframe narratives of Taiwan’s democratic transition, but also to affect its geopolitical position and participation in international institutions. In this sense, the creation and effect of a TRC is not only contingent on regional context, but may in fact be part of a larger program to redefine the region itself. Taiwan’s TRC will, perhaps uniquely, be run by the administration of a contested state that lacks universal recognition and is still coming to terms with its history of multiple colonialisms. However, by recognising the TRC’s utility as a political instrument, it is also necessary to pay attention to the potential pitfalls of Tsai’s TJ strategy. Taiwan’s TRC harbours the potential of consolidating a collective national memory, but along the way it is likely to be criticised by the KMT and its aligned media outlets and may add fuel to the fire of Taiwan’s fractured polity. In fact, a full accounting for the past could stymie Tsai’s stated goal of ‘true social reconciliation,’ especially with KMT leaders and supporters claiming that TJ interventions are being manipulated by a partisan administration that seeks to undermine the KMT’s influence.

Read alongside her later interviews, her call for TJ suggests a strategy of using a TRC as a discursive technique and policy tool to signal a departure from the ROC’s authoritarian past and to draw a distinction from China’s authoritarian present, while demonstrating adherence to international norms of human rights, democracy and self-determination. As the legitimacy of both the ROC and the PRC relies on discursive claims to exclusively represent the Chinese nation, Tsai’s commitment to ‘deepen and evolve Taiwan’s democratic institutions’ in order to ‘propel Taiwan forward’ marks a clear break from the China-centric economic policies and Chinese identity politics of her immediate KMT predecessor. Indeed, it signals her responsibility to the people of Taiwan rather than to the members of an imagined Chinese nation.

Tsai’s election promises to ‘maintain the status quo [with China]’ constrain her from declaring independence, rewriting the constitution or changing the name of the ROC. Thus, the TRC provides an additional mechanism to maintain the assent and participation of her more nationalistic Taiwanese supporters and sympathisers who may see a TRC as a way to directly condemn the KMT’s colonial legacy and indirectly condemn China’s contemporary irredentism. This, however, may be a hard square to circle, as the TRC may also implicitly reinforce the authority of the ROC state, which some of her most radical supporters reject.

Tsai’s base, however, is composed not only of social activists and Taiwanese nationalists but also of business people with a financial interest in political stability and trade liberalisation. Additionally, the broad and open-ended announcement of a TJ agenda raises the possibility of future acrimony and infighting within Taiwan’s polity, including claims of political persecution. KMT chairwoman Hung Hsiu-chu said that Tsai’s program may ‘twist’ justice and aggravate divisions and hatred. Political acrimony and divided constituencies are endemic in both transitional governments and well-established, diverse polities. Tsai, hoping to consolidate her political authority, does not want to alienate these different groups. She faces the difficult task of balancing calls for TJ with the otherwise technocratic aims of her administration, particularly economic growth and liberalised trade. The TRC, therefore, can be understood as an additional and more subtle political resource Tsai can use to reshape Taiwan’s cultural and political sphere in ways more conducive to her broader political agenda. By fostering a new collective memory, one that fully acknowledges the repression of the 228 Incident and the White Terror, Tsai hopes to show that her government, although still working within the framework introduced by the KMT, is legitimate even to those who would like to see it ultimately replaced with a de jure independent Taiwan. If influential – and there is no guarantee it will be – the TRC may mitigate these contradictions by providing an authoritative, state-directed reinterpretation of Taiwan’s history, resolving the ongoing textbook controversy and tempering more violent struggles over Taiwan’s national identity. It may also keep her base motivated for future electoral campaigns, and provide further resources for reform of persistent distortions to Taiwan’s democratic institutions, such as the recovery of ‘ill-gotten’ KMT assets.

What this case suggests is that a TRC may offer far more than a tool that bridges past and future governments, or transforms authoritarian regimes into emerging democracies. Rather, the Taiwan TRC’s emergence in the shadow of China and the US hints that a TRC may serve as a geopolitical strategy with potentially radiating effects. Taiwan’s political transitions involve the most powerful countries in the world, as its sensitive trilateral relationship with the US and China makes it a global geopolitical flashpoint. Taiwan’s proposed TRC may implicate not only the previous rulers of the ROC but also the US, which provided political cover and looked the other way during the 228 Movement and the White Terror. China could also be implicated in this TRC, as new research demonstrates that a small number of the White Terror victims may have been Chinese communist agents – as the KMT claimed – and should perhaps be compensated by the CCP instead of the KMT. More dramatically, should the TRC further discursively reframe Taiwan as ‘Taiwan’ and not the ROC, a new constitution and de jure independence may appear closer on the horizon, raising the spectre of a confrontation between China and the US, which has previously pledged to protect Taiwan in the event of Chinese invasion. But managed in a ‘cautious manner,’ as Tsai has proposed, it may not only contribute to domestic nation building but incrementally redefine Taiwan’s place in the regional and international order. In so doing, it may prove a landmark case for a new form of geopolitical TJ that other countries, particularly those seeking to assert or redefine their territorial boundaries, may emulate.

Ian Rowen is a Postdoctoral Fellow at Academia Sinica and Associate Researcher at the French Centre for Research on Contemporary China (CEFC). Starting May 2017, he will be Assistant Professor of Geography at Nanyang Technological University in Singapore. More at ianrowen.com.
Jamie Rowen is Assistant Professor of Legal Studies and Political Science at the University of Massachusetts Amherst. Her forthcoming book, Searching for Truth in the Transitional Justice Movement, will be published by Cambridge University Press in July.
An expanded version of this article can be found at the International Journal of Transitional Justice. 11(1), 92-112.  https://doi.org/10.1093/ijtj/ijx001
Image Credit: CC by 總統府/Flickr.
A Balanced Philippine Foreign Policy: Managing Relations with Major Powers
Deliberate, Not Desperate: The Philippines’ National Security Strategy on the West Philippine Sea