Prospects for Peace under the Duterte Administration

Home /Peacebuilding, Philippines/Prospects for Peace under the Duterte Administration 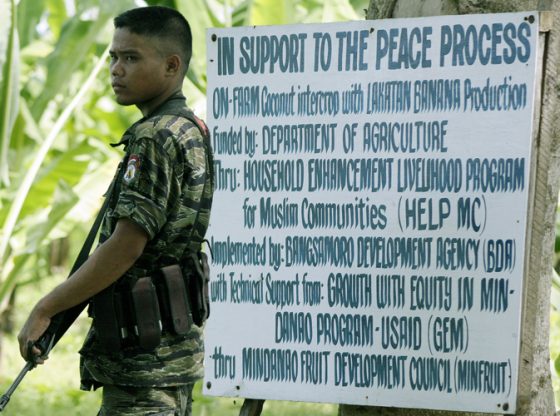 The Bangsamoro and the Communist armed opposition groups emerged under different historical circumstances and were fuelled by separate principles. Though seen as largely unrelated, the successful implementation of the CAB can contribute to a general feeling of confidence in all of the peace processes currently being managed by the GPH. This requires delicate manoeuvring by individual stakeholders on the ground and would have to be directed by a national rhetoric aimed at prioritising dialogue over military action.

The implementation of the CAB was delayed during the final months of the Aquino administration due to the Mamasapano incident; a raid to arrest suspected international terrorists taking refuge in a local village in Mamasapano, Maguindanao. The botched incursion caused the deaths of 44 Special Action Forces (SAF) members, 18 MILF combatants, and 5 civilians. During his campaign, President Duterte expressed support for the establishment of the new Bangsamoro, either through the formation of a new autonomous polity or the federal division of localities. Since the Mamasapano incident, Congress is yet to draft the law that would implement the CAB. Nevertheless, the GPH went ahead with forming a commission that would oversee the transition from the old autonomous entity, the Autonomous Region in Muslim Mindanao (ARMM), to the Bangsamoro. Formal legislation is still required to complete the process, something the President could easily push given that his party has the majority in both the Upper and Lower Houses in Congress. It helps that different parties within and outside the GPH have been quietly working on confidence-building measures to ensure the delay in the timeline does not derail the intended outcome of the agreement.

One serious challenge to peacebuilding in Muslim Mindanao remains the presence of kidnap-for-ransom groups such as the Abu Sayyaf (ASG). There has been a resurgence of the group’s attacks in recent years, including the kidnapping of several Filipino and foreign nationals and the killing of hostages. While ARMM and local leaders have denounced the ASG’s activities and remain committed to peace, clashes in the proposed Bangsamoro territory and surrounding areas present a serious security challenge to the implementation of the CAB. Fears that the Islamic State (IS) may influence radicalisation in Southeast Asia and lend strength to the ASG remain credible. It should be noted, however, that the Bangsamoro struggle in Muslim Mindanao has always been about fulfilling the aspirations of the Moro people, long neglected by the national government, as opposed to the goal of IS and other radical groups of forcibly establishing an Islamic caliphate. With the implementation of the CAB underway, the peace process in Muslim Mindanao should be able to withstand the spread of radicalisation from external forces.

The dialogue with the NDF has not met with the same success and has remained stalled for the past few decades. Prospects started on a positive note during President Duterte’s campaign, with CPP founder Jose Maria Sison expressing support for a ceasefire and the resumption of talks after a long hiatus. However, disagreements reportedly emerged on thorny issues. One predicament cited by the President refers to the release of some 400 Communist rebels who are considered political prisoners by the NDF, something the GPH was not prepared to do. A similar proposal was made to the Aquino administration and was also promptly rejected. Through the intercession of the Norwegian government, members of the GPH and the NDF peace panels agreed to resume talks in April. President Duterte has since supported their joint statement, but reiterated that the ceasefire and the negotiations must have clear parameters and goals.

The amnesty of combatants is generally a sensitive subject in peace negotiations. Still, most peace agreements contain a form of guarantee that combatants who surrender will be given amnesty. In return, combatants must completely disarm and demobilise, signalling their abandonment of the armed struggle and transition to civilian life. This can only happen when there is trust between the state and the armed opposition group. In the case of the CPP-NDF-NPA peace process, that trust is not present. The GPH has given reasons for this, citing activities of the NPA that undermine peace and order. Renewed hostilities, however, would be costly and unsustainable, especially as the GPH faces other internal and external threats. More importantly, it will continue to mar affected communities in a state of poverty and insecurity. Jose Maria Sison still holds the President in a positive light and, unlike previous heads of state, President Duterte is seen favourably as a non-elitist, anti-imperialist leader by supporters from the Left. If peace with the CPP-NDF-NPA has any chance of coming to fruition, that opportunity is at its highest with this administration.

The implementation of the CAB is on track, despite being delayed from its original timeline due to the Mamasapano clash. It is important for the GPH to keep its eye on the ball and provide continuous support and engagement to the transition commission to boost confidence. The passage of an implementing law to the CAB will also give a clear signal that the GPH is committed to seeing the peace process through. Though unrelated to the CPP-NDF-NPA peace track, the successful implementation of the CAB can contribute not only to confidence-building measures in Mindanao, but also to the overall perception that the GPH (especially President Duterte’s administration) is committed to building peace.

The process will likely take many years and its effects may be seen only after President Duterte’s term. However, the euphoria that peace brings with its promise of improving people’s lives should not be underestimated. The peace talks between the GPH and the CPP-NDF-NPA will resume and continue due to the genuine desire to end the conflict. Its completion will require commitment from both sides, openness, and a willingness to trust one another. In the realm of security, enforcement is what the President is known for, a trademark carried over from his local government experience and exhibited with urgency in his anti-crime campaigns. Building peace is a perfect opportunity to show how he manages other facets of governance.

Pauleen Gorospe is a PhD Candidate at the National Graduate Institute for Policy Studies in Tokyo. Her research focuses on peacebuilding and security sector reform in post-conflict situations. She is also a member of the Women in National Development and Security (WINDS), a non-profit organization seeking the broader participation of women in the security sector. She tweets @gardenofnight. This article forms part of the IAPS Dialogue edition “(In)Security in the Philippines.”  Image Credit: CC/ Wikimedia Commons.