The Vulnerability of Christians in India Today 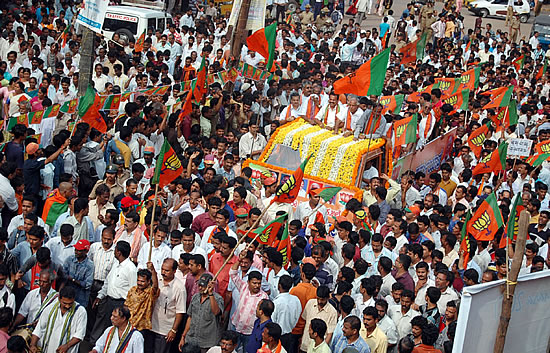 The Social Hostility Index, which was released last week by the Pew Research Centre, ranked India fourth in terms of high level of social hostility, behind only Syria, Nigeria and Iraq. This is the most recent reminder that religion continues to be a vital issue in the country. While tensions between Muslims and Hindus have dominated this narrative, there has been an increased level of violence against Christians, most recently demonstrated by the five incidents on Palm Sunday in Madhya Pradesh, Rajasthan, Haryana, Uttar Pradesh and Tamil Nadu.

There is also a major divide between [groups]… this could make it hard to come together as one community in terms of political representation and in influencing legislation such as the Christian Personal Law.

The proliferation of these incidents (which include murder, rape, public beatings, and intimidation) against Christians in India started in the late 1990s. The numbers of incidents have steadily increased over the years with the Evangelical Fellowship of India reporting 177 cases in 2015.

The increase in violence against Christians coincides with the phenomenal growth of Hindu Nationalist organizations, especially the Bharatiya Janata Party from the political peripheries to the centre. This collection of organizations regard India as a land of Hindus and consider Christians and Muslims as “foreign religions” who are a threat to the integrity of a Hindu Rashtra (nation). Following the recent state-level elections, the BJP is now in power (solely or in coalition) in 17 states and at the Centre. With the decline of the (secular) Congress and other opposition parties, it seems likely that the political system will be BJP-dominated for the conceivable future.

This has created a sense of threat among Christians. The National United Christian Forum (NUCF), a group consisting of apex bodies of Catholics, Protestants, and Evangelicals, issued a statement warning that “the cultural DNA of India, of pluralism and diversity, is being threatened. We are anxious about the implications of the fundamentalist political thesis that India is ‘one nation, one people and one culture.’”

A deeper study of the Christian population reveals four interesting aspects which make them especially vulnerable in today’s India. While in legal terms and in the discourse of Hindu nationalist groups, Christians are often referred to as a single and homogenous group (bounded by a common religion), a wide diversity exists among the Christian community in terms of denominations, affluence and access to power, and even caste.

Firstly, Christians are the second largest minority group in India (after Muslims), representing 2.3 percent of the population. While small in proportion, their absolute size of roughly 28 million people makes them the second largest Christian minority in the world, after China, and the 22nd largest Christian population. While their absolute numbers rise, their share of the population has been stagnant: hovering between 2.3-2.6 percent since the 1960s.

A frequent claim of Hindu nationalist groups is that Christians’ rapid growth poses a threat to the Hindu population. However, between 2001 and 2011, the decadal growth of Christians fell dramatically from 24.4 percent to 15.5 percent. The decadal growth has shown a steep decline since the 1960s when it was 31 percent.

The fear of alienating the sizeable number of Muslim voters (around 14 percent), is credited for being the reason for the overall reduction of violence against them following the demolition of Babri Masjid and the resulting riots around the country (although individual acts of violence continue). However, the small and slow-growing size of the Christian population implies that their size cannot act as a viable electoral deterrent at the national level.

Secondly, the Christian population is spread out unevenly across the country. Most Christians are found in the south and south-west of the country and in the north-east where they form the majority religious group in four states. However, their numbers are sparse in the north and central parts of the country. The states which have higher percentages of Christians tend to experience less violence and Christians are wooed around election time. For example in Kerala, a BJP MP candidate promised quality beef if elected and the party promising not to impose a beef ban should they come to power in the north-east states.

The third aspect is the divide between the denominations themselves. For example, Catholics (who are the largest Christian group in the country) possess differing views on issues such as divorce. There is also a major divide between Evangelical groups and mainstream churches around the issues of strategies and intensity of missionary activities. This could make it hard to come together as one community in terms of political representation and in influencing legislation such as the Christian Personal Law.

Finally, of the Christian population, at least 70 per are Dalit or Tribals who have converted to Christianity. These intersecting identities imply that they are susceptible to intersecting discrimination and violence. In an entrenched caste system, Dalits (who comprise at least 50 percent of the Christian population) are considered to occupy the lowest levels of society; irrespective of their conversion out of Hinduism. They will always remain Dalit and subject to violence from upper-castes. Dalits and Tribals form the ‘margins’ of Hinduism. Their inclusion into the Hindu fold is vital to maintaining a “Hindu majority” in India – an essential step in maintaining power. Christian missionary success among these groups are viewed as an erosion of and therefore, a threat to this majority.

The ability to practice faith is an essential part of Christianity. Incidents like the ones that took place this Palm Sunday are a violation of the provisions of the Indian secular constitution to “practice and propagate” religion. The BJP have tried to appeal to voters and to appear friendly to Christians by tempering its messaging in certain states. Despite this, in an era of BJP dominance, a sustained level of violence should be expected; either as means to coalesce votes in the creation of a Hindu identity, or a consequence of efforts to create a Hindu Rashtra in India.

M. Sudhir Selvaraj is a doctoral student at the King’s India Institute, King’s College London. He is the editor of Revisioning Paradigms. You can follow him on Twitter @sudhirselvaraj. Image Credit: CC by BJP/ Creative Commons.

Liberalization, development, and religious minorities in India: A capital idea
As Hindu nationalism surges in India, cows are protected – minorities not so much