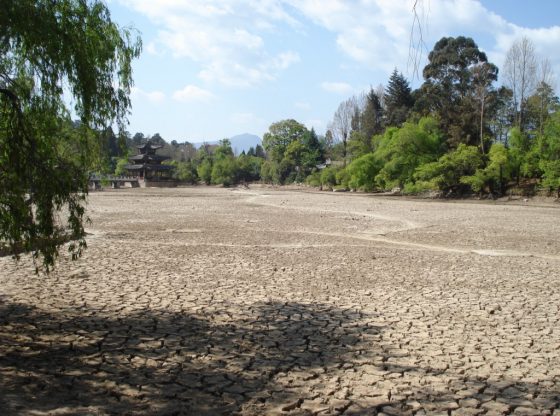 According to a 2015 United Nations report, the world will not have 60 percent of the water it requires in 2030, without significant changes to conservation efforts and public policy. The situation is arguably made more dire by the reality that the entire Asia-Pacific region boasts only 36 percent of global water resources, making per capita water availability the lowest in the world. China contains only seven percent of the world’s freshwater supplies; in Beijing alone, the city’s water volume is 150 cubic meters per person, significantly below what the United Nations considers as “water-stressed” at 1,700 cubic meters or less. Such statistics do not even begin to touch upon the hinterland where water supports agrarian communities and the livelihood of many Chinese.

While a lack of water resources may not necessarily lead to overt conflict, the severity of consequences brought on by the demand for water far outpacing supply should not be underestimated.

As China looks to the future, the problem extends well beyond the necessity of ensuring continued access to sufficient water supplies. Other predominantly urban water challenges include water quality control, coverage of sewerage and wastewater treatment system networks, pollution control, and ecosystem degradation. Simply put, the very essence of whether Beijing is able to sustain the lives of people living in its largest global hubs and rural villages will be decided by how the Chinese government adapts to and addresses its current water crisis. As both a public policy and environmental dilemma, how Beijing handles the problem thus portends to pave the way for others facing similar water shortages around the world.

But before turning to how China has begun to address water scarcity and mitigate the above consequences, it is worth a brief pause to examine the underlying sources of the current problem. After the founding of the People’s Republic of China in 1949, Chairman Mao’s water development projects echoed large-scale, capital-intensive Soviet-style projects. According to Harvard University historian David Pietz, Mao’s water development investments created “substandard irrigation systems, damaged soil fertility through poor drainage and over-exploited water reserves.” Short-term gains of raising agricultural productivity came at the cost of depleting water supplies. Groundwater overdraft continues nearly seventy years later with declines exceeding one meter per year across northern China. The problems created through the Mao-era water management systems have been further compounded by changes in the environment, ranging from increasingly warmer temperatures and deforestation for rubber and eucalyptus plantations to continued soil erosion. Widespread pollution and water-intensive industrial uses in coal and livestock – known as “virtual” water exports that leave one province for another – further exacerbate infrastructural and environmental complications. It is with these problems in mind that Beijing has continued to strive toward finding an appropriate solution, efforts to which this piece now turns.

There are several familiar solutions to address China’s water crisis already in place. Where more potential lies for the future, however, is in the decisions Beijing has yet to make – the innovations and changes to public policy it will pursue in order to ensure its people have continued access to the precious natural resource. It is the decisions that China makes about managing and resolving its water crisis that can transform how other countries view the same issue. Beijing is thus at a critical juncture, as both its failures and successes in managing water scarcity come under increasing scrutiny, and determine the extent to which Beijing is able to shape the global response to today’s water crisis.

Beijing has turned to the Tibetan Plateau to bolster its water supply, a headwater for ten of Asia’s major rivers and source of water to one-fifth of the global population. Dams built by Beijing over the last decade divert water from these rivers, policy decisions with external ramifications that have helped water power become a geopolitical battleground. For now, Beijing’s strategic location upstream of the plateau has enabled it to overlook such ripple effects in favour of continued infrastructure programmes. But not all water movement projects have gone unnoticed. Few projects received as much criticism from beyond Chinese borders as the Three Gorges Dam, the world’s largest hydroelectric dam on the Yangtze River. Construction of the dam’s 410-mile-long reservoir necessitated the relocation of Chinese villages en masse; even as 1.3 million citizens were offered compensation to find a new home, such relocation efforts were plagued by local corruption. The dam also buried historic and cultural artefacts, such as those of the Ba people from 4,000 years ago. Amid recent flooding, concerns have surfaced that the dam cannot protect against a “once in 1,000-years” flood as originally touted. Additionally, with two of its three stages in operation, the South-to-North Water Diversion Project will move water over 750 miles from Yangtze River tributaries to the northern plains. Already one of the most expensive engineering projects in the world, the finished series of canals and waterways aims to channel 44.8 billion cubic meters of freshwater annually, but like the Three Gorges Dam it has not come without impacting on some half-million Chinese people.

Beyond shifting existing water resources around, another approach Beijing has taken has been a re-examination of existing environmental policy and standards. Water management has consistently held a place in Beijing’s five year plans, with the 2015 plan calling for both the implementation of “the strictest management system for water resources … and a national [groundwater] monitoring system” as well as an online real-time pollution monitoring system. In theory, pollution levels have come under closer scrutiny with continued revisions to the water law on prevention and control of water pollution as well as more stringent work from both the Ministry of Environmental Protection and non-profits to measure and track emission levels. To support efforts to clean up Chinese waters, the government pledged to spend US$333 billion on a water pollution “action plan” and also put water usage caps into place in five provinces. These policy shifts are an effort to bolster accountability: individuals and entities alike are being held to a standard of what an acceptable environmental footprint looks like. Those that abuse water resources – be it for industrial or agrarian uses – will face consequences ranging from naming and shaming to forced closures and criminal punishments.

But more work remains for Beijing in what is a fundamental reworking of “attitudes, approaches, and institutions.” Even if existing policies are rigorously enforced, and the infrastructural innovations work as hoped, Beijing still risks facing a predicted water shortage of 199 billion cubic meters in 2030, even as domestic population numbers peak. Beyond cleaning up and regulating existing water supplies, the central leadership must continue to think creatively about how to mitigate the crisis at hand. Large-scale water transfer projects and a plethora of policy initiatives alone will not be enough. To this end, Beijing must also consider the following measures:

A 1993 issue of National Geographic magazine powerfully penned, “all the water that will ever be is, right now.” The continuation of human life is thanks to water – we are both made of it and rely upon it. Beijing is thus rightly concerned about environmental degradation, particularly water pollution and scarcity. While a lack of water resources may not necessarily lead to overt conflict, the severity of consequences brought on by the demand for water far outpacing supply should not be underestimated.

China thus stands to fundamentally alter how the world responds to depleting water reserves through its own domestic response. Each new policy initiative, technological advance, or infrastructural development can signal to other countries in both the global north and south how they, too, can adapt to decreasing water supplies. For the decisions that face subsequent challenges – such as questioning the flood control capacity of the Three Gorges Dam – China’s partners and friends can learn from Beijing’s mistakes. But it is the success stories that others will emulate. Over the next decade, Beijing’s ability to apply cutting-edge treatment technology, to enforce environmentally-sound policy, and its overall efforts to clean up its existing water supplies will have ripple effects around the globe. If Beijing is able to transition away from the Mao-era large-scale, centrally-managed water infrastructure in favour of more advanced “green” processes and capabilities, China stands to lead the global efforts to tackle water scarcity, carving out its niche as a truly “responsible stakeholder” in worldwide water supply.

This piece is adapted from the 2016 Young China Watchers-Lau China Institute Inaugural essay contest. Lauren Dickey is a Ph.D. candidate in War Studies at King’s College London and the National University of Singapore, where she focuses on Chinese strategy toward Taiwan. She tweets @lfdickey. Image: A photo of the dried bed of the Black Dragon Pool, taken by the author in 2012.

CGTN: China’s Latest Attempt to Win Friends and Influence People
How to Be a Journalist in China: A Personal Reflection