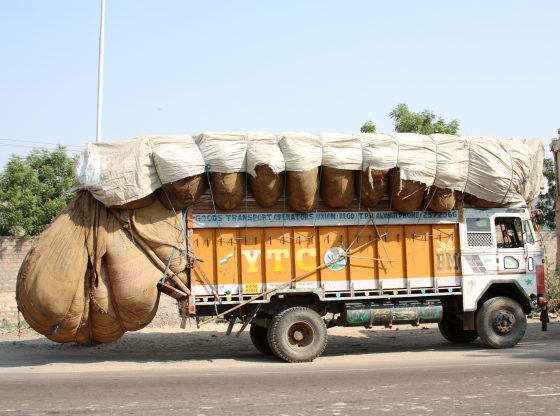 Many developing countries have increasingly begun to position themselves to participate in regional and global markets. This is true also in South Asia, one of the least integrated regional blocks due to the constant bickering between the two economic/military super powers in South Asia, namely Pakistan and India. As a result, India has gone ahead and signed agreements with Nepal, Bangladesh, and Bhutan for the free movement of cargo between these nations without the need for trans-shipment at the border and thus saving cost. For a long time, the intra-state movement of goods in India has been subject to various taxes at the internal borders, hindering movement of consignments. After negotiation for more than a decade among the states and Union government, India has recently passed the landmark GST (Goods and Services Tax) bill for making India a common market for most of the products. Thus, one can expect that there won’t be the familiar scene of long queues of cargo-loaded trucks at the states’ border after July (when implementation begins).

…the volume of trade has grown significantly, faster than the expansion of capacity.

This is no doubt a positive development and we can expect that the transaction cost of trading within India and across India, Bangladesh, and Nepal would come down. In a recent paper by Pohit, it was estimated that the aggregate delay in overland trade between India and Nepal was more than 200 percent of ideal time. According to the respondents, the financial implication of the delay for exports to Nepal turned out to be 5.5 percent of the value of the consignment, whereas the same for imports from Nepal amounted to about 8.5 percent of the value of the consignment. Similar estimates for trade between India and Bangladesh indicates that the additional transaction cost in terms of delays and speed money incurred by the Indian exporters to Bangladesh is about 10 percent of the shipment value.

Even though India has an impressive railway network, road transport is the preferred mode of transport across India. This is also true in Bangladesh and Nepal, of course due to the nature of the terrain. This is basically due to the efficiency in speed of delivery, relative to the railways and the small size of the consignments even though the speed of delivery may be low by international standards.

The conditions of the Indian national highways have generally improved. However, truck transportation within India is still subject to long sections of congested roads in poor conditions. The state-border as well as inter-country crossings (India-Nepal, India-Bangladesh, India-Bhutan) are typically congested due to increased urbanization. The scope for widening the roads is limited due to encroachment by inhabitants on public land.

In addition, in India, the extraction of ‘speed money’ from merchandise trucks by officials is prevalent. To some extent, this is true also in Nepal and Bangladesh. There are problems caused by police personnel patrolling the highways, who invariably put up barricades on the roads to secure bribes. It is estimated that 90 percent of highway trucks are over-loaded in India but they are never seized despite repeat violations because they pay ‘speed money.’ A sizable number of trucks in India do not possess pollution/goodness-of-fit certificate but are allowed to continue travel in connivance with officials. Thus, it may be a high hope to expect that congestion at state borders would decline with the passing of the GST bill.

At the outset, international experience to secure efficient cross-border management suggests the following three methods: capital investment, new legislation and regulatory reform. Capital investment was the key component of the strategy for developing the Pan-American Highway, but its performance suffered from the lack of attention given to  regulatory reform and legislation to facilitate cross-border movements. The Northern and Central Corridors in East Africa initially relied on investment but have since focused on legislation and regulatory reform to facilitate the movement of goods on roads and rail infrastructure. On the other hand, the EU has relied on legislation to implement strategies for the development of the trans-European transport network.

One of the best options for increasing the efficiency of clearing import and export cargos is to relocate the clearance procedures away from the border. Indeed, this is one of the basic insights of the EU’s program. Inspections of truck registration, drivers’ licenses and certificate for road-worthiness can be conducted along the corridor but away from the border. Cargo inspection and clearance procedures can be relocated at inland-bonded warehouses, container depots and dry ports. This approach was pioneered to alleviate congestion at international seaports but is now being adapted for imports arriving through land borders in Europe and transition economies. It allows movement of goods under bond from the border to inland customs facilities or special economic zones or other enclaves that are granted duty-free status. This can include allowing cargo to be cleared at factories. This is one way to decongest border points.

Capital investment at border points is costly for developing countries like India, Nepal and Bangladesh. Indeed, these countries do not have the funds to undertake such improvements/ measures at all the officially-designated border points. What has been achieved in reality is capital investment at only a few of the main border points. However, the volume of trade has grown significantly, faster than the expansion of capacity. Consequently, it has not helped to reduce the congestion. In India, it has become increasingly difficult to acquire land for any project. While the traders would like facilities to be developed (increased capacity of warehouses, cold-chain facility, space for parking, etc.), it is very difficult to acquire land in a congested border town. Thus, any capital investment that would require land acquisition is subject to problems and so regulatory reform and new legislation are the avenues through which border points can be decongested.

How to Be a Journalist in China: A Personal Reflection
Small acts of journalism: Professionalism and Integrity in CCTV’s English-language news