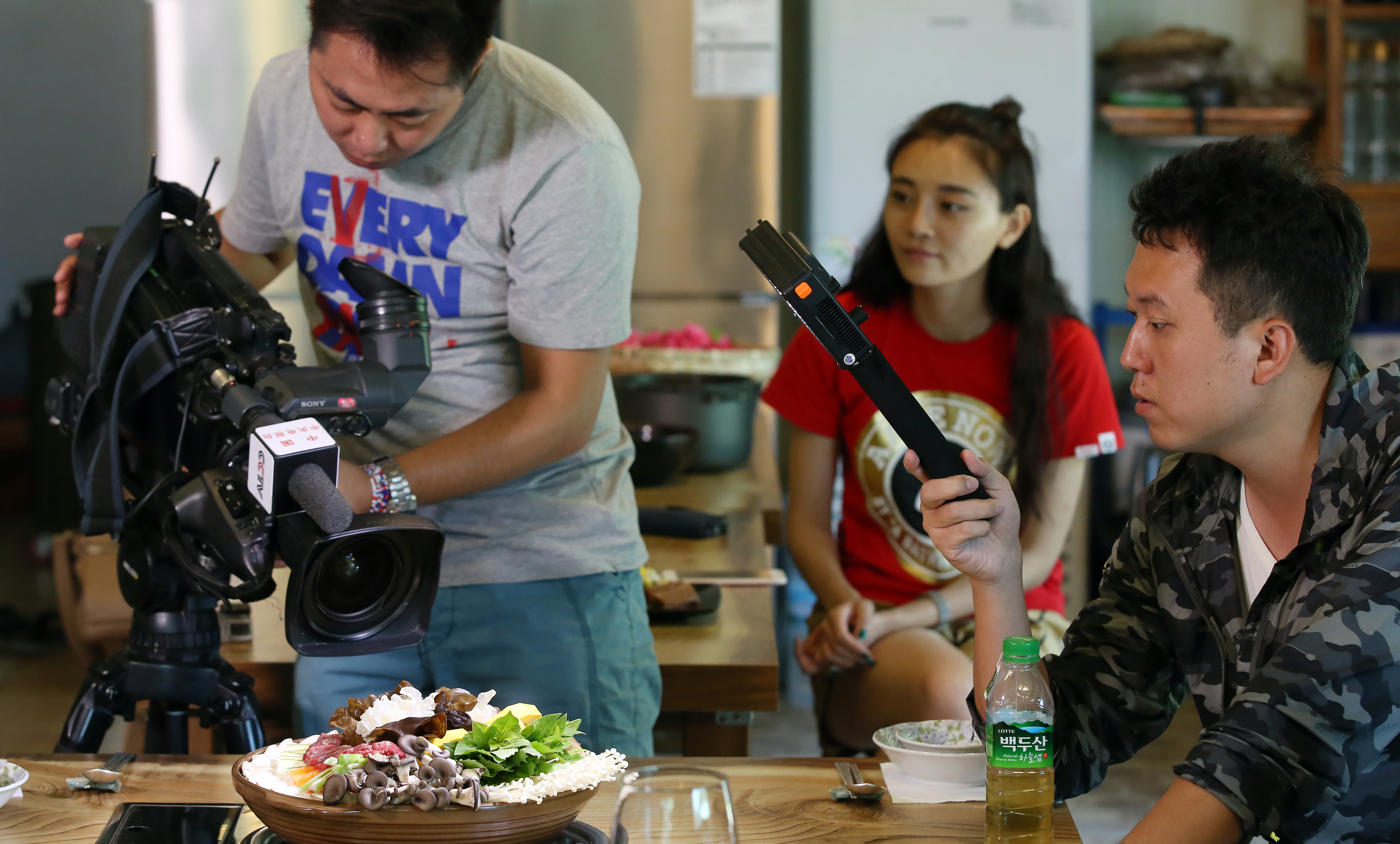 How much space is there for credible, authoritative reporting at the English-language news channel of China’s state television network, CCTV?  Here in Britain, facts and experts may be disregarded when politically expedient, but the public retains a curious insistence on its domestic news broadcasters behaving – as the BBC puts it – with ‘due impartiality’. Inhabitants of western democracies, particularly journalists, presume that no state-controlled news organisation can subscribe to such ideals or, indeed, go about its work with professional journalistic purpose. But these assumptions would be challenged by many employees of the Anglophone news stream of CGTN, the newly-rebranded global arm of CCTV.

In interviews conducted over the past three years with some thirty employees of CCTV’s English-language news channel, answers involving ‘professional’ and ‘professionalism’ surfaced frequently, unbidden, from the most routine questions. Sometimes the P-word was spoken with pride: the search for the facts, the exigencies of a good story, the insistence that the journalist had worked no differently when previously employed elsewhere. In other interviews, ‘professionalism’ was seen as something to which CCTV’s English-language news aspired but which it had not yet attained. This was explained in terms of production values – improving, but not as slick as interviewees desired – but also occasionally because of acknowledged deficiencies in CCTV’s reporting standards. One interviewee, questioned about the channel’s credibility, observed that CCTV’s Anglophone news was ‘all true. The problem is, it’s just part of the story. It’s just one side of the story.’

In the fake news era, most news organisations are trying to position themselves at the left-hand side of a continuum that measures what might be summarised as ‘the truth, the part-truth or nothing like the truth’. At CCTV-News/CGTN, however, this placement is complicated by a separate division – between acting as state media, which most of its journalists consider unavoidable, and editorialising, which they deem unprofessional. This duality of purpose has dogged the channel since CCTV-International was launched 13 years ago, when Jirik noted China’s ‘commitment to two clearly incommensurable values, a commitment to accuracy and objectivity, and a commitment to being a voice for the PRC’.  It is still hampering the channel’s pursuit of wider credibility and that elusive notion of ‘soft power’, in Beijing and in the Nairobi and Washington network centres which opened in 2012.

The aim of ‘political neutrality, bordering on inoffensiveness’ detected in a recent study of CCTV-News can best be observed at CCTV-America, whose news programmes often steer clear of domestic Chinese issues or relegate them in the running-order. The channel’s foreign news, particularly in areas of low Chinese state influence, is often indistinguishable in approach from coverage by Anglo-American broadcasters. Indeed, CCTV/CGTN is home to several journalists recycled from Al Jazeera and the BBC, including at one stage five previous BBC correspondents in Latin America alone. ‘DC’ – the Washington newsroom – is regarded by many CCTV employees in Nairobi and Beijing as the ‘most professional’ of the Anglophone production centres and the part of the channel they want to emulate. Older hands, however, accuse it of failing to offer a distinctive news agenda, of missing an opportunity to convey a more Chinese-centred view of the world.

CCTV-/CGTN-Africa, based in Nairobi, takes a different tack. There, the physical and editorial distance from Beijing is palpable. Its Africa-facing programmes take pride in exhibiting a more upbeat side to the continent’s news – although managers acknowledge they cannot completely avoid the dread triad of famine, disease and conflict. CCTV is not alone in trying to smash the stereotype of African reporting: the BBC also has a daily television news programme tasked with leavening the editorial mixture. However, the Chinese broadcaster is perhaps unique in characterising this as ‘positive reporting’, a definition from which most western news organisations would recoil. Some of CCTV-/CGTN-Africa’s news conforms to editorially more rigorous principles of ‘constructive journalism’, in which attention is focused on resolving society’s problems. An illustration of this was CCTV’s depiction of the conflict in South Sudan, which focused on mediation attempts rather than the bloody events of the battlefield. A stable South Sudan would certainly aid China’s quest for raw materials, but CCTV’s framing of China as Africa’s brother and benefactor also works in more oblique ways. A substantial newsgathering budget in Nairobi enables light to be shed on the continent’s most under-reported countries – the subtext being, ‘we are here for you’. However, the channel’s coverage of Chinese involvement in infrastructure projects across the continent so far has been devoid of critical focus, and Beijing’s political allies also tend to escape CCTV’s journalistic scrutiny.

It is in China itself, at the Beijing headquarters, that CCTV’s English-language journalism is at its most constrained and where the political stakes are highest. While the American and African outposts have their own regional agendas, Beijing shoulders the bulk of the task of explaining China to the outside world. In general, the picture it paints of China in its news programmes is partial and top-down, its narrative a stream of political pronouncements, industrial achievements and the doings of the Politburo, and with down-bulletin features promoting China’s traditions and culture. Even here, however – under the controllers’ noses – there is occasionally room for editorial flexibility in the most politically delicate of subjects.

Consider the coverage by CCTV-News of the 2014 Hong Kong protests, for example. It was certainly dominated by the overarching need to promote the return of harmony and stability to China’s fractious ‘Special Autonomous Region’, and began by avoiding any video of the Occupy camps, concentrating instead on blaming demonstrators for economic losses in Hong Kong’s tourism and commercial sectors. There was comparatively little coverage of these aspects in the Western media, where the narrative mainly focused on student idealism, and the dominant vantage-point was from the main Admiralty encampment. Once, this editorial disparity between East and West might have been enough for the Chinese broadcaster. This time however, as the occupation took hold, CCTV reporters in Hong Kong also began interviewing anti-government protesters, staging ‘walk-and-talk’ pieces to camera in the encampments, and showing wide-angle footage that revealed the scale of the Occupy protests. This was of course not all that they covered, and the general editorial palette supported Beijing’s interests, but the output was more inclusive than many observers had expected.

It would be easy to draw parallels between such reporting and the chronicled ‘small acts of resistance’ through which citizens can subvert the will of an authoritarian state. This is not what is happening here. CCTV/CGTN reporters range from careerist Chinese Communist Party members to foreigners keen to benefit from a newsgathering budget less constrained than those in the West. They are unlikely to bite the hand that feeds them. What is visible in the English-language news service, rather, are ‘small acts of journalism’, existing within the system and pushed as far as experience tells the journalist it is possible to go. The younger the journalist, however, in general the more timid the self-censorship. Many CCTV/CGTN reporters on Chinese affairs are much younger than their overseas counterparts.

CCTV’s English-language news may increasingly look and sound like its Anglo-American rivals, but its structure militates against its ever becoming a Chinese CNN.  As one senior journalist in Beijing put it, real change at the channel might come ‘only when the top Chinese leadership realise the importance of making professional news, and how skilfully and smartly we can set the news agenda.’ That does not sound like a recipe for impartiality – but in a multipolar and increasingly media-literate world, transparency, rather than impartiality, may be the quality that international news services such as those of CCTV need to acquire most. As news consumers survey their spectrum of sources, it may be enough for a state-run broadcaster to tell only part of the story, as long as that part is accurate, the channel’s position is clear and a variety of channels are available. The position of CCTV’s English-language news, however, is not clear: the messages from Beijing, Nairobi and Washington are at variance with one another as the channel tries to secure footholds in several widely differing markets. CGTN is not fake news, but it is not – yet? – news as we know it either.

Vivien Marsh is writing up her PhD thesis at the University of Westminster. It compares CCTV’s English-language news with that of BBC World News TV. Until 2013, Viv was a long-serving BBC global news journalist. Image Credit: CC by Republic of Korea/Flickr.